11 reviews
Save to Dropbox

It's the fourth anniversary of Luxaren Allure being complete! (and wow, like nearly 6 years since I started the project!)

Before I continue further, I just wanted to share some really awesome stuff, like this super cute artwork I got from ebeth recently! So adorable!!! 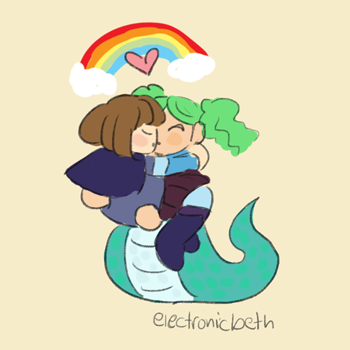 And as anyone who's been following the comments is no doubt aware, Error recently completed this really incredible fanfiction about Merel's continued research after the events of the game, and if you haven't checked it out, I urge you to do so, because it's really well written and enjoyable! :D

If you'll indulge me, I'd like to ramble a little about Luxaren Allure and future plans for games. I replayed LA recently this year, and I'm still pretty darn happy with how it turned out! My favorite part is probably the Hotenshin Contest of Love, as what started as a silly idea also happened to wring out a lot of funny character moments and some drama and just a lot of fun.

While I still get a lot of great comments both here and on Luxaren's itch.io page, I still felt like maybe I went a bit overboard with the density of RPG battles in the game, not to mention the game has a very slow pace, as I prioritized exploring around the isles over really investing players with a deep plot right away.

At the same time, I kinda like that more relaxed pace, but I can see how it didn't gel with some players and I could have done more to hook people right away. And it means people who primarily wanted yuri content had to power through all the exploring and battling just to get to content they wanted. Some even cheated to get there (which is fine, you do what makes you happy :DDD). Makes me think I could have done better, though.

As you probably know, I've been working on Weird and Unfortunate during the years since LA's release, but I've been longing to do more projects like Luxaren, with fantasy settings and cute lesbian relationships. During RMN's Rainbow of Positivity event, I got that chance, and released a demo of Date Knights, a short RPG with a focus on a Holy Knight and Dark Knight who used to date and meet again for a mission years later. 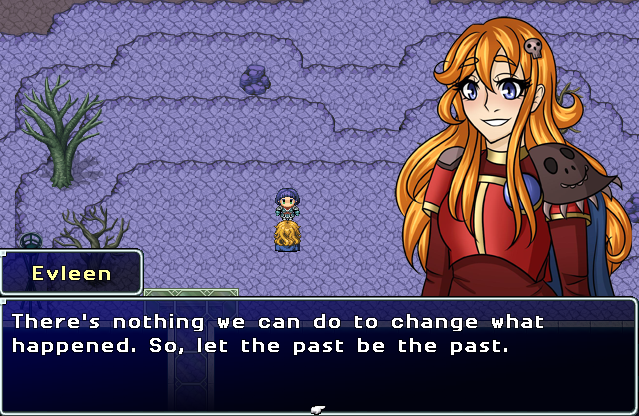 I really need to go back and flesh this demo out into a full game, but if you haven't checked it out, please feel free to give it a play and let me know what you think ^_^

And there's also the matter of what I work on next after Weird and Unfortunate. It'll probably be a remake of Lilies of Vanigale (a game I almost finished in RPG Maker XP over like ten years ago) or I'll work on Eye of Uzola (a game I started in RPG Maker 2000 as a teenager).

What sort of game would you like to see from me in the future? :DDD While I can't say it'll absolutely influence what I make next, I am curious XD 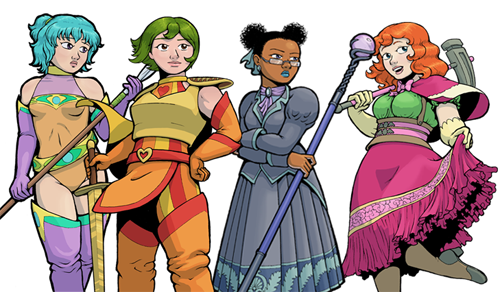 The Lilies Cast, as drawn by Sooz!


Okay, that's enough rambling and reminiscing from me! Time to get back to work on RPG making! Hopefully I can finish Weird and Unfortunate early in 2020 and get to make even more games! A huge thanks to everyone who's following me and cheering me on! Seriously, it means a lot to me!

I usually wait for stuff to be finished before playing it, but I might make an exception for Date Knights if it's going to be a while otherwise.

...people who primarily wanted yuri content had to power through all the exploring and battling just to get to content they wanted. Some even cheated to get there

My first, somewhat-uncharitable thought is that people who don't enjoy exploring and battling aren't the target audience for an RPG. But if you want to support them anyway, maybe add a "story only" difficulty setting, that removes all the battles except bosses. I certainly appreciated that the setting was there, and it seems as good a solution as any.

(I'll admit to some self-interest here. I *like* the combat, it was one of the high points of LA, I'd be disappointed if it were de-emphasized next time around. :-P)
Sooz

Close
12/11/2019 05:45 AM
I'm gonna say the chance of uni making an RPG with no battles is somewhere around the chance of an ice cube surviving five minutes of microwaving.
Malandy
209

author=Sooz
I'm gonna say the chance of uni making an RPG with no battles is somewhere around the chance of an ice cube surviving five minutes of microwaving.

Depends on how strictly you define "No Battles". I've seen a few systems for non-violent RPG Combat Resolution...
Sooz

Close
12/11/2019 07:53 PM
Well, yeah, but that still falls under the "Battle" definition in systems terms. And this is more about how uni devs, and the woman is a fiend for battle systems.
Red_Nova

There you go. Justification established.
Marrend

Guardian of the Description Thread
19779

On that note, because I somehow missed this entire blog...

author=unity
And it means people who primarily wanted yuri content had to power through all the exploring and battling just to get to content they wanted. Some even cheated to get there (which is fine, you do what makes you happy :DDD). Makes me think I could have done better, though.

What is "better" in this context? Fewer battles? More yuri content? Each player of LA has their own preferred balance between the two, and trying to match each preference is, well, impossible. Maybe you want to blend the battles and yuri content closer together by tying the battles closer to character development, such as the above example? Fine, but then people who don't want RPG battles at all won't like this design choice. Maybe you'd rather do what Error suggested and include an option to skip battles? Again, a fine idea, but unless there is something else they can do while moving from point A to point B, that will get boring really quickly. But including non-RPG elements where enemies would be would also detract from the stated goal.

I say all of this because, from my secondhand impressions of the people who powered through the dungeons to get to the yuri content, it sounds to me like their expectations just didn't gel with your intent for LA. This is not inherently a bad thing. Soul Sunder, for example, got a fair amount of criticism for having a slow start in the childhood arc, but that slow start was very deliberately paced to establish the life and personalities of the main characters under normal circumstances before ripping the rug out from under them at the end.

So yeah. That may be two paragraphs that could have been summarized as "haters gonna hate," but, as someone who found the balance between the dialogue, romance, and battles thoroughly enjoyable (enough so that I ran through the game multiple times as a tester!) I am curious to know what you think you could have done "better."

author=unity
What sort of game would you like to see from me in the future? :DDD While I can't say it'll absolutely influence what I make next, I am curious XD

Personally, I'd like to challenge you to design a core game flow that you don't usually attempt. While there is absolutely nothing wrong with the way you've handled progression in the past, it usually contains the same cycle of "go to new area -> fight enemies -> fight boss -> story content -> go to new area"

I'd like to see a game that flows differently while retaining that unity-brand look and feel (whatever you believe that entails). Examples would be:


All of these examples provide interesting opportunities for character growth and battle designs, so I'd like to see what you can pull off attempting a different game flow.
Marrend

Guardian of the Description Thread
19779

Close
12/12/2019 03:45 PM
I think the Confidant system from Persona 5, where characters get various abilities as the relationship blossoms, is also something to think about!
Malandy
209

You mean Battle Network, right? Not the uh... Platformer originals or whatever?

author=Marrend
I think the Confidant system from Persona 5, where characters get various abilities as the relationship blossoms, is also something to think about!

Not sure why I'm responding, but just so it's clear, Persona didn't pioneer relationship values leading to rewards... Maybe that was Bioware?

Souring a relationship might be an interesting path to explore, by contrast, but doesn't seem to fit with the relationship positivity of what I'm feeling from uni's works, yeah.
Pages: 1