Hello once again and Merry Christmas to all those celebrating Christmas reading it on Christmas (Had to add that XD)! It's over... :(

So with the first part of Black Galax out of the way, now it's time to pave the way for the second game which will conclude the story.

Personally I have no idea how many people enjoy the game enough to care about this blog post but I will be talking a bit about my thoughts of this game - with regards to the 3 gameplay elements, what's going to be removed and added as well as the risk of continuation (In that I won't be able to continue) which I will leave at the last part. So without further ado let's get started.

Quick Thoughts about this game:
Personally, making this game sort of defined a good chunk of my life for the past 3 years working on it. I've taken an interest in things I wouldn't have taken if I had not started this game - In this case, Programming and music. It was a great journey and much of it involved testing out and trying out new stuff that sort of break the norm. Here are my thoughts on stuff that I tried to 'break out' of the norm:

Setting: If you've played the game, the setting for this game revolve around our CURRENT Modern Era. The few games I found (forgive me if there's more and note that this was about 3 years ago before I started) were X-Noir, Profit motive (A pretty good game that kind of went dead), as well as a few zombie games by InfectionFiles and not to mention majority of the horror games. Not much focuses on RPG. So I decided to try out a RPG take on our Modern Society, with tweaks that need to be made due to resource constraints and things such that it would make sense. So this game ended up with a mix of Fantasy and Modern.

Generally quite proud of it :D

Court Trial: This one gave me a HUGGE Headache. The gameplay of Court Trial is largely inspired by Danganronpa and I thought, hey, why not give it a shot? So I created the rules, mechanics as well as the various gameplay elements that would make Court Trial fun. Well, it is fun at first, but following that was a big headache. Making sure all the dialogue flows properly was a headache, designing a case then trying to unwrap them in a GAMEPLAY format was a headache, and the eventing process was overall just hell for me.

However, even though it is hell, it is very satisfying to actually finish a trial. It is a great experience, instead of playing the detective, I'm playing the role of a criminal mastermind which is a pretty novel feeling. Despite that, even till today, I can't help but feel that Court Trial is the least polished part of the game despite having devoted at least 1/4 of my time overall 2500 hours (According to steam) on it.

Action Battle Phase: I have nothing much to say about this. But I thought it is interesting to have Action Battles running in parallel to Turn-based battles.

Overall experience:
It is pretty awesome to design a game and the best part of game development is definitely the characters. Having to think of their quirks, their personality, hobbies, and how they all fit into the plot is very satisfying.

Unfortunately, I do not have the resources - and ability - to draw, so that's a pretty huge waste. I digress XD

With reflections out of the way, what's next?
The sequel to Black Galax of course ;p
Well, more specifically what the next game will entail plot and gameplay wise and if different, how different will it be compared to the first game?

A much darker story Who says horror cannot co-exist in an RPG :D - Then again, would it be scary if your characters are not helpless and squirming for help? 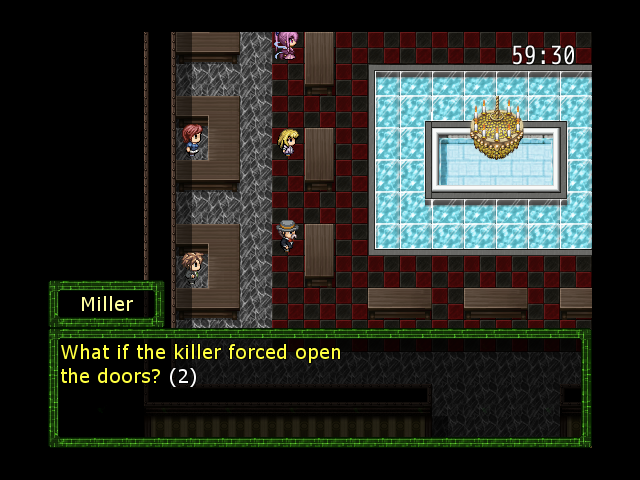 I'm lazy to take a screenshot of the updated court trial :p

If you've read my reflection earlier on my headache with court trial, this should not be a surprise. However, even though Court Trials maybe gone, certain elements of it will remain. Or at least that's my intention for now ;)

Much more harder battles! Plus Skill Revamps!
Battles in Revert can be considered 'easy' in my opinion with the exception of a few which I would consider really hard. In the sequel, battles will now be A LOT harder and rage worthy that much I can guarantee IF (keyword: If) you aren't prepared. For example, killing too fast will get you wiped, Radiation Poisoning everywhere, mitigation, bosses drink medicine and recover all their health, certain new bosses can land critical hits (All the one hit kills...), much less forgiving real time turn based battle and more :D

To compensate for all this, every single character's techs will now get a good buff! How in what way will depend. For now, I have added 2 new skills to Gary! The first is Stasis which guarantees immobility AND INVULNERABILITY. The second is Minus Blow, similar to Minus Strike in FF, the damage he deals is equivalent to Max HP - Current HP - some defense stat. which synergize well with his specialty as a tanker. What other moves will get a buff I am uncertain at the moment, since I will adapt their skills based on what is needed to counter bosses in this game. If you've played the first game, you'll realize that this game has a very small pool of random wildlife mobs. The sequel will feature more wildlife in the game. In fact, you can say the number of wildlife has increased by 260%~! Now I can quite proudly say this game have AT LEAST a 2 digit number in its random mob encounter pool.

Now here comes the "What If I had More Time!?" Section
Which is highly unlikely, given how slowly I'm progressing through the game right now. I have no confidence that I can finish by the dateline which I will explain later. But if I do have more time, this is what I'll like to do.

Historian's Report Quest Files:
If I had more time, I will implement a similar side quest to the first game where there is an actual plot. But this one will involve more around Cliva's past and its 'oddities' and 'anomalies'. You will uncover these oddities and anomalies with a Merritus University Professor and fight bosses too which will allow you to...

Crafting System!
... craft new weapons! This is another feature I will only consider adding in if I had more time. With the 260% increase in wildlife, there are more items to be found which means a crafting system will be much more viable in the sequel.

I have more ideas, but I don't want to go out of hand at the moment. So that'll do!

Progress Report:
So far progress have been slow and I am pessimistic that I can complete within the dateline that have been forced upon me. Yes, if I cannot complete within the dateline, this game will go into hiatus for 2 YEARS! Ain't life cruel? It is also precisely because of this I might have to drop all of my side projects for this game. (No, it's not because I'm going to jail or anything like that XD, it's a more patriotic reason I shall say and leave it at that)

So far, I've only done up to the very first part of the very first chapter. Which is before the meat portion of Chapter 8. I expect development to speed up a bit more once I have finished Chapter 8 since I have more ideas on how to continue after that.

Well, that's all from me. I could and would want to write more in terms of progress, but it has been very slow at the moment that there is nothing to show. Once I have more going for it, maybe I'll do another mega post like this. Which might be months later. So with that said, I would like to say a BIG THANK YOU to all those who have tried out this game and supported the game and I wish all of you reading this a merry Christmas and a happy new year!

Also, it seems like the Misaos is going on. Pardon my shameless promotion here but if you enjoyed this game, feel free to nominate it in any category you think it might deserve! And... there still isn't a review for the full game yet, soooo... yeah. (Cue the expression of shameless promotion and begging everywhere XD)

P.S - If you read through this wall of text, congrats! You deserve a cookie!
P.S.S - Also, thanks to William TheUnproPro for the shoutout to my game, glad you enjoyed it too! I know it's 3 months late since I just found out about the video you did for a collab recently.