Full version has been released!

Hey!
After working several hours every day (not) on Re & Apophis since August 2013, I can finally announce the release of its full version.
Have fun!

Hello!
I had not much to say about the game the last couple of months, though now I can announce that the full version of the game will most likely be released this June.

There is not much left what I have to do, so this month is very likely.

I could need a proofreader, so if anybody of you is interested, just let me know. :)

Hello community,
those of you, who have played the game sure have noticed some graphics, which clash with my own graphic style. Well, this is history. The full version will still contain very few RTP graphics, but they are edited so that the match my style, as you can see here:

I have also edited the window skin a little, as you can see here: 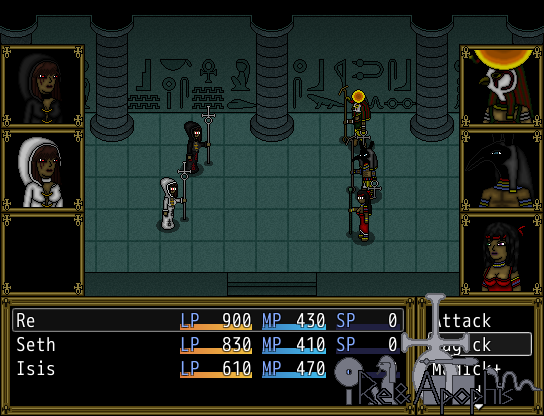 This is all for now.

Has anybody played the game?

Hey,
I'd really appreciate it, if those of you who have played the second demo version would rate the game. It would really help me for the full version...
Some feedback.

Re & Apophis 2nd demo has been released!

Hello community,
after I have started working on the game more than two years ago, I can proudly announce the release of the second demo version! Since the first one was released on 1st January this year, much has changed. I want to thank everyone who has played the first one and gave some feedback.

I hope that you will give me some feedback again, because this is the last demo before the full version will be released next year.

I hope that you enjoy the game. :)

Hey,
the release date for the upcoming second demo has changed from 4th November 2015 to 1st October 2015. So if you think about to download the game now, I'd recommend you to wait for the second demo.

Here is a list of changes:
-Seth in his unleashed form is controllable now, he is also able to use unique skills
-Seth won't be able to summon Ammit anymore
-Isis' Magick+ skill "TP Transfer" isn't available anymore
-Isis has a new skill called "Teleport", which allows the player to teleport to important places such as the villages and the main temples, to reduce unnecessary and annoying paths

-Better language (thanks to Chaikster, a native English speaker who did proofreading)
-Skill description contains damage formula now
-Temple of Osiris is not as dark as in the first demo anymore (opacity from 185 to 135)
-Equipment upgrading system is a little bit faster now
-Enemies give a little bit more reward (experience and money)
-Re has another voice now (Simon "Iron Croc" DLSea)
-Isis has a voice now, too (Crazy_Leen)

-Some small bugs were eradicated
-Some smaller "cosmetic improvement"

-The length of the demo of course

Hey,
I've done some changes, according to Seth in his unleashed form.

In the first demo, you are not able to control him because he is on "autobattle".
In the upcoming demo, he will be controlable though.
Also he has some unique skills which only the unleashed form of Seth is able to use:

-Multiattack hits every enemy with 75% of strength
-Charge is a skill, which powers up Seth for the upcoming attack. It will hit with 225% (instead of "just" 100%)
-Essence of Duat is a magick attack, which's damage is according to Seth's (U) MagickPoints, which will be multiplied with 2 (after usage, the MP will drop to 0)

Hey guys,
I want to present you another great track by J. Stewart. As the title already says, it is called Wrath Of Sobek.
Enjoy! :)
Re & Apophis - Wrath Of Sobek on youtube

Hey,
I've got a little screenshot, which I'd like to show you. 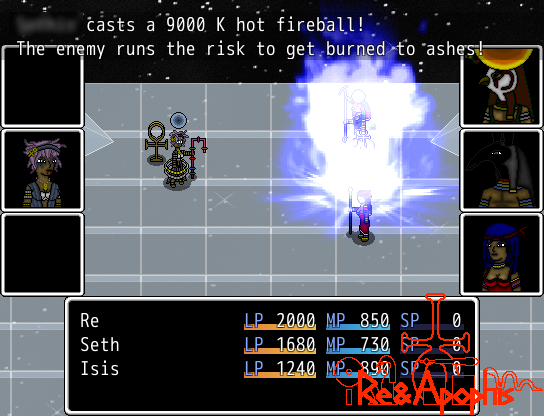 Do you know, who this woman could be?
Well, the attack which she uses is a hint, just like one of her "accessoires".
She will be encounterable in the full version of the game, which will be released
next year (most likely).
The 2nd demo version will be released on 4th November this year.