In this entry into the 2013 Game Chill event the wrath of Krampus is invoked when three siblings on a rite of passage break into their school in order to steal the hat from a Frosty the Snowman sculpture. The rules for the event were simple, developers had three weeks to design a single winter-themed dungeon for the player to navigate through and had to include three of six possible items in some form, and yes Frosty the Snowman was one of them.

For those of you who weren't brought up in one of the alpine countries of Europe, have not seen the 2013 Christmas episode of Grimm, or have forgotten how to use Google. Krampus is basically the anti-Santa. Whilst Santa gets all the good press, along with milk and cookies and carrots for his space and time defying mutant reindeer, just for handing out presents and generally being a jolly fat man in a red suit, Krampus gets the other half of that naughty and nice list. Nothing as benign as a lump of coal for this hairy, horned goat-legged beast man, he will take you from your bed in the middle of the night, beat you bloody with chains and/or birch sticks, throw you in a basket and then drag you bodily down to hell. That's if he doesn't drown you in ink, tear off your ears, or scalp you alive by ripping off your pigtails. It gives a whole new meaning to 'be good, for goodness sake.' 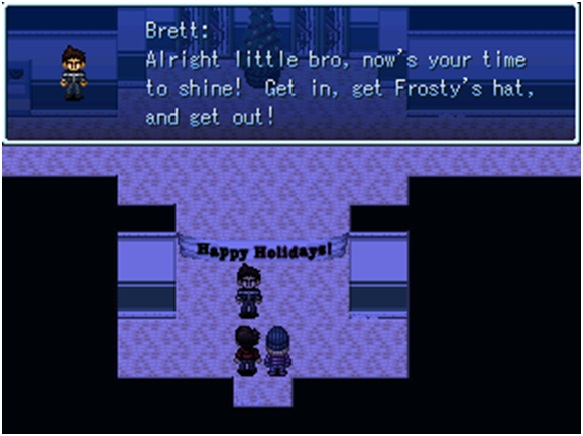 It sounds so simple when he says it.

The game opens with the strains of Dance of the Sugar Plum Fairy from Tchaikovsky's Nutcracker Suite, no RTP music here. In fact very little in the game is RTP, certainly none of the tile chip-sets or character sprites, all are custom and for an event that had to be completed in a little over three weeks that's quite impressive. There are even imaginatively and appropriately named skills and the second of the three prerequisite items appears in the form of gingerbread men, which are used to boost your HP.

However before needing to replenish your health you'll need to get into a battle, luckily for this trio that comes almost immediately. Heading into the school's assembly hall you find the Frosty statute you were expecting but he is sans hat. It seems someone beat you to it, or at least that is the assumption. Disheartened you begin to leave before Frosty decides that you might as well be hanged for a sheep as a lamb and he's going to make you pay just for breaking in to steal his hat, even if you didn't manage the second part of the plan. Battles are as to be expected ATB, it's RM2K3 after all, wait that's RT2K3 now, and you have the option of choosing either wait or active mode. The imaginatively named skills come into good effect in this battle because you can't actually do any damage to the giant ball of snow without them, which makes sense; you're modern school children in winter woollies, not mediaeval armour clad warriors. Lisa the youngest sibling and designated support has a great spell in her arsenal, Cheer, which rebuilds the MP for the members of her team so they can keep pounding on the oversized hailstone with a carrot on his face, and when she's not doing that she can invoke Cutesy Time and debuff its attack and defence, talk about girl cooties. Lisa is integral to a successful battle, lose her and you lose the fight.

So after kicking Frosty's cold white butt you find that you are mysteriously trapped in the school and it's time to go looking for a way out. Best place to start of course is the headmaster's office, after all if anyone is going to have the keys to the front door, it'll be them. Of course things are never that easy. 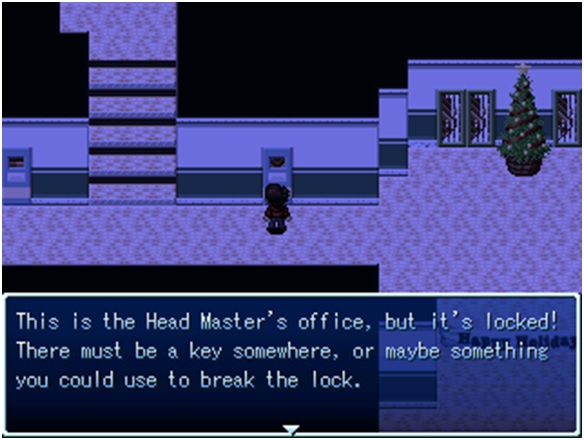 So it's off on a treasure hunt through the deserted halls of your school to find a means of escape. Along the way the danger of your situation becomes more obvious as you notice the drifts of snow and the like scattered throughout the supposedly sealed school. It seems Frosty wasn't the only ambulatory snowman on the prowl. Luckily whilst there is evidence of other entities in the halls you never see one, and don't have to fight any others. In fact there are only two combats in the game, Frosty and the co-opted pagan winter spirit himself. But before you can get to him you need to do a little grade school chemistry. Luckily Lisa is not only great support staff; she's the brains of the operation. So with a touch of potassium and some of that now quite handy melting snow to provide the water component we have ourselves a small explosive device and that lock on the door to headmaster's office is history.

Of course given the events of the evening it should come as no surprise just who it is that is waiting in the Headmaster's office, and honestly every school child knows their headmaster is really a nasty demon waiting to take away all their holiday fun. 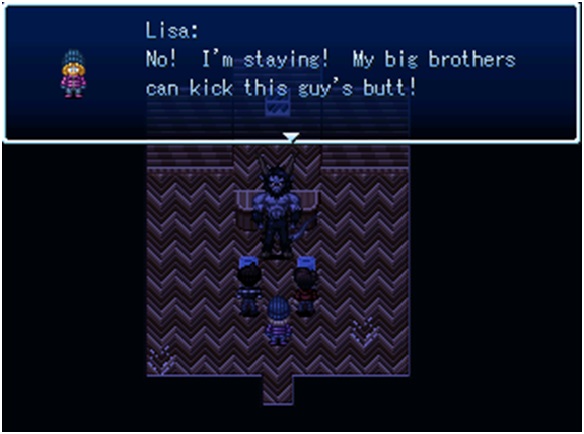 With you they can.

So after pronouncing little Lisa a fine and upstanding young lady with her innocence still intact Krampus sets about claiming the two brothers as his prize, but of course Lisa is having none of that and off we go into the final battle. I've seen some comments on the gamepage about how tough this last battle was so I have to assume the developer nerfed it between the contest version and the one I played since as long as Lisa kept spamming her haste and MP regeneration spells with the occasional heal thrown in for good measure, the boys took care of Krampus with little major effort and no loss of life.

The game ends immediately after the battle without any sign of that third component of the obligatory six items, but I think you could probably add prayer to Frosty and gingerbread because if you didn't have Lisa in that last fight you wouldn't have had a prayer of defeating him. A Krampus Christmas is quite short, 15 minutes from go to whoa if you check every door and classroom, a few minutes less if you luck out and find the unlocked chemical storage early, but for what it was it was an enjoyable quarter hour.

Close
07/21/2015 11:38 AM
Ah…memories… I remember playing this as a judge for the Game Chill event back in 2013 when Rachel ended up getting abducted by aliens one night and left us all hanging out to dry. (Oh, the memories…)

But I do remember the final boss in this being a bit of a b**ch to defeat, though - but overall it wasn’t that bad of a game! I like the custom sprites and everything that Sam had going for it.

Good review, nhubi. I just had to comment on it after seeing this game pop up again and going like, “Heey, I remember this game!” Thank you for reminding me once again about all those wonderful times that we all had.

You know, I really should be a judge again for another event sometime in the future... I had fun that last time. :)
Marrend

Anyway, this review briefly reminds me that I wanted to do a review for Czarina Must Die (the winner of Game Chill 2013).
Addit

Close
07/21/2015 12:11 PM
One of us should probably review it sometime around this winter if we get the chance. I wouldn’t mind revisiting it again.
Marrend

author=Addit
One of us should probably review it sometime around this winter if we get the chance. I wouldn’t mind revisiting it again.

That would probably be the best irony. To review that game two years after-the-fact, given the in-joke (at the time) that we were the slowest judging-staff ever.
nhubi

I'm glad you enjoyed and that it brought back memories, now both of you go review Czarina Must Die so I can read what you think.