1DP is a very very short game so as per tradition I'll ditch the traditional format I use and just stream-of-thought review 1DP. Despite the length, it was enjoyable to an extent. I don't thing the scale of the game did the story any favors however. A lot of the game's plot could have been handled better. Specifically, making sure that it was coherent probably would have been more wise than giving busy work for a majority of it.

Which reminds me! There is an error in the game where Vince asks you to help put Ryan and Linda asleep but he means to say Sammy and Linda. I recall the sound effects being odd for the game. They sound a lot more like what you'd hear in a horror game than a short tragedy. And they scared me! They probably shouldn't but they did - they created a weird atmosphere. There probably should've been some music in the orphanage since the silence was a little boring. I appreciated that the graphics were all custom, they were simple but you can't really ask for much when they're created in one day. Now for the story! It's a little blunt, but a few details kind of confused me. Basically, you play as a child (named Totti) who wants to run away from an orphanage. In two endings he runs away with Ryan, and one he's hit by a car and dies. I was a little confused by the diary so I'm not sure how literal the events are. Also I got to the Ryan endings through the Load Game so it kind of feels like the game was presenting them as if they didn't happen and the car ending was the way it went down. Additionally, I'm unsure if you can actually play the entire game up to the Ryan endings though I did try.

Some nice details: Sammy playing with a car, Linda was pretty realistic as far as little girl characters go, the English in the game was very good. Though, 1DP is kind of bad about telling you what is happening instead of showing you. For example, Sammy is said to be a bad kid or unpleasant at least, but he really doesn't act very bratty or rude. He only seems bad when the main character finds a broken doll and even then he assumes Sammy did it. He's also easier to get into bed than Linda who was a lot worse (though more realistic). 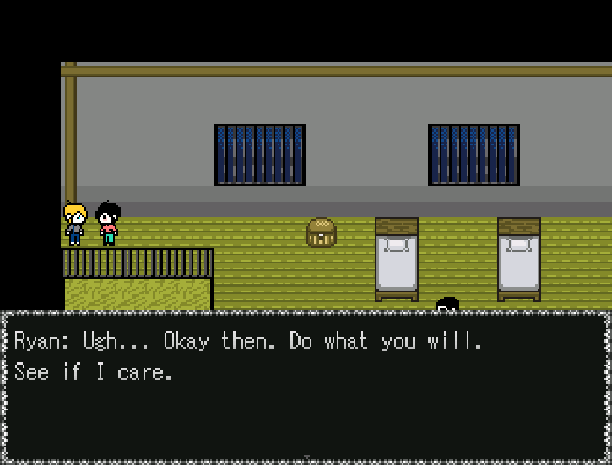 Are you a praying mantis? Because you are biting my head off right now.

Close
01/28/2014 05:44 AM
Woah, first of all, thank you so much for this review! Really surprised again;; it was very insightful, great in pointing my mistakes - which I'd love to correct for the bigger project I'm working on - and I really laughed with some of your comments, so thank you! :')
Sorry I didn't really get what you meant by scale, though - do you mean how short it is? Actually, I have to agree with that.

I hadn't noticed the dialogue mistake at all;; I'll definitely post a revised version later, thank you so much!
As for the sfx, I could've gone for cartoonish, but since it was mostly "a bad day", I thought the more realistic/"creepy" sounds would amount for a nice effect. I'm sorry it scared you, though!;;

The events are.... quite literal I think. I mean, it's supposed to be a diary, only you - the player - can't access some pages until Totti recalls what happened on certain circumstances. You can get the Ryan endings depending on how much you interact with objects and in which order, all of which subsequently affects which diary pages are presented and, with that, which ending you'll get.
(A curiosity - although the Totti ending is easier to get (and the first one I did in game format, too) technically the sad hospital ending would be the 'canon' one.)

I can definitely see what you mean. As for why Sammy was easier to get into bed, I guess he was tired since it was late! *laughs* Okay, he isn't that bad; Just brattier than the other boys around, I guess. Maybe he's just young.


Well then. Once again, thank you so much for reviewing 1DP, and have a nice day!! (◡‿◡✿)
Gourd_Clae

I'm a big baby by the way, so the sound effects might be fine.
Pages: 1