Unique, but flawed and mediocre

Looking at Pixel Oscar: The Pixelated Door’s game page, I was kind of impressed by it. The graphics were colorful and the premise sounded unique. A 2D platforming game made in RPG Maker VX? That’s something that you don’t see every day, I had to try it. But once I downloaded the game, I was met with disappointment.

You play as Oscar or one of his many friends, exploring different worlds and defeating enemies along the way. One of the first things you’ll notice is… how poorly drawn are the main characters, while the rest of the game uses ripped resources from other games. I don’t really want to criticize it, because I’ve been there, I’ve made shitty sprites with my bad art skills before. But is hard to not point out how awful they look, especially compared to the rest of the game. Most of the graphics are ripped, so why not use some too? The graphics of the different characters that you can pick are just recolors with a different head, which feels just plain lazy. There are so many of them but none really stands out, a few them have some nice extra features, like shooting double shurikens or shooting through walls. But really, there’s no reason to have so many of them and I’m starting to believe that they are friends of the developer or something like that. 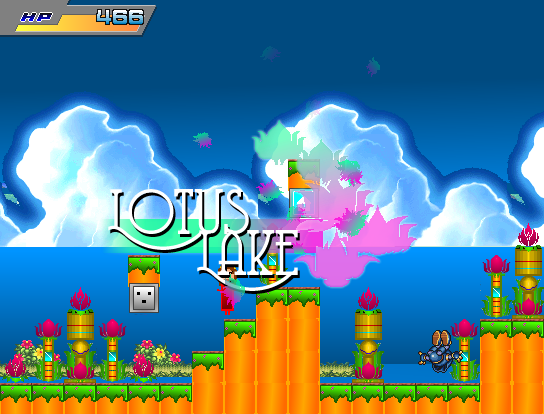 Speaking about the graphics, the game looks very colorful indeed… but feels like a mishmash of styles at times, with not a very well thought design beforehand. One perfect example is the already mentioned problem with the sprites, the main characters look awful and simplistic, the villains look like they were taken from Disgaea? And the normal enemies just… spin around all over the place. Some levels look a lot worse than others, for example, the Pagoda Pathway is an eyesore, and Haunted Harbor has some unnecessary effects that only distract you and obscure the view. The game feels like it doesn’t have a consistent art direction. 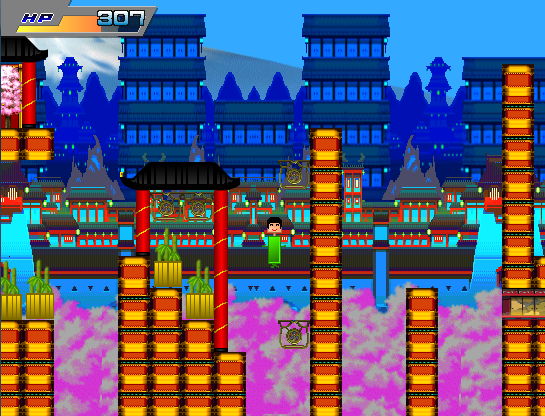 Now let’s talk about the gameplay, most importantly, the physics. And I’m not sure why, but they feel a little off for me like you can’t move your character as precisely as you want. This makes some sections of the game very frustrating, there’s nothing worse than failing a jump not because of your skills, but because of the game. Is hard to explain it, you have to play it to see what I mean. There are also a few RPG elements, like every time you kill an enemy, you gain experience and gold, plus there’s a status screen where you can check out your stats. I haven’t gotten far enough to know if you can do something with the gold you’ve gained, but the experience helps you to level up, which is mainly useful for the boss fights… though they tend to be very easy anyway. 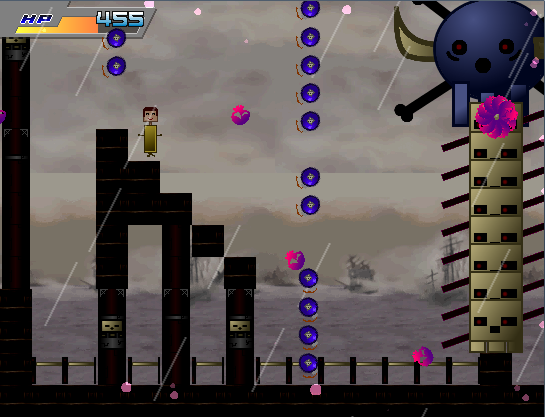 There are a lot of other minor complaints too, like how is hard to know which tiles are solid and which are not. Some hitboxes are bigger than their sprites, like with the blue fire in the Haunted Harbor. Hell, there’s even some “floating invisible blocks” in some levels, and some are not hidden at all. Then there are the enemies, which are a complete joke. Their AI makes them jump into pits, getting stuck there forever, and even if they manage to attack you, they don’t deal too much damage. How about the skills you can gain? You get a Heal spell that completely trivializes any kind of difficulty the game had. And some of the skills are simply unusable, the same happens with some items you can find, you can’t equip them. And finally, the writing, which is full of typos and the story feels dumb.

I really wanted to like this game, I wanted to see how could they make a platforming game in RPG Maker, but welp, the end result is pretty awful. At least the game is playable enough to be able to finish it, but me? I can’t stand it. Not only it has a lot of problems, even if they were fixed the game is still kinda boring. If you want to see what is possible in RPG Maker? Try it, but be ready to expect a mediocre experience.