Poor Eric, default hero. He's not adverse to saving the day, and the girl, and the kingdom and well just about everything else. That's his job after all, he's the hero. Placing himself in mortal danger to protect those of lesser skills is part and parcel of his existence and he doesn't resent it in the slightest. If he wasn't a hero what else would he be? A sushi Chef with expert blade handling skills? Personal trainer with a punishing fitness regimen? Scrawny but powerful circus strongman?

No, he's a hero, and he will be one until he shuffles off this mortal coil and ends up in Valhalla, but every so often it'd be nice if he could just take a few days off, just a few, to sit somewhere tranquil and enjoy the peace and quiet, no quests to fulfil, no maidens fair to save from dragons foul, no tyrant to overthrow or enslavement to end. Just a good book, a cold drink and peace.

Eric's Day Off is a short game created with an interesting premise for the RM Venture contest, just what do the classic RM heroes do in their downtime, in the case of Eric and his companions, they're heading off on a cruise. But as heroes are universal trouble magnets the vacation does last long and Eric is soon thrown head-first into a quest to save the world again, from well, something nefarious if a little nebulous, because as rapidly becomes apparent, it's not like the thing can save itself. Though of course first of all they have to deal with the airship pirates. 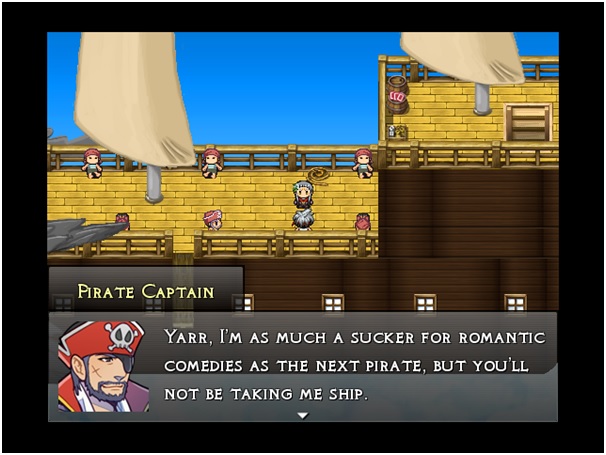 Once the offending pirates are dealt with and the realisation that no-one left alive or conscious on the ship can actually fly it our heroes decide that discretion is the better part of valour and take a swan dive over the side to land in the soft and spongy swamp below. They are heroes after all, jumping from impossible heights and surviving unscathed is pretty standard fare. It's a shame about the fellows they left tied up or unconscious on the pilotless airship above though.

There are some nice touches in the game that let you know that the developer for all that the contest gave him a fairly limited time span in which to complete it really thought about the consequences of his opening scenario. None of the heroes have any of their magnificent armour or weapons that they have earned or found over the course of their heroic adventures, they have to make do with what they can find. Which in the end equates to pretty much nothing, this is a swamp after all, even the wood is too rotten to make decent quarterstaffs. All of the skills have personalised messages attached some of which are quite funny, though you have to concentrate a little to see them as they flash up during combat. As do the item descriptions and even the map names. A lot of thought went it to making the situation as real and fluid as possible and it shows.

It's the interaction between the characters where the game really shines though; they play off each other wonderfully with some honestly funny moments and exchanges that had me smiling. Eric is for all his heroic ways, a bit of an idiot, Brenda spends most of her time both angry and slap happy and Terrance is not the most reliable of companions, unless one gets the feeling you send him out for munchies. So a happy go lucky hero, an angry archer and an unreliable paladin stuck in a swamp, but they seem to work. 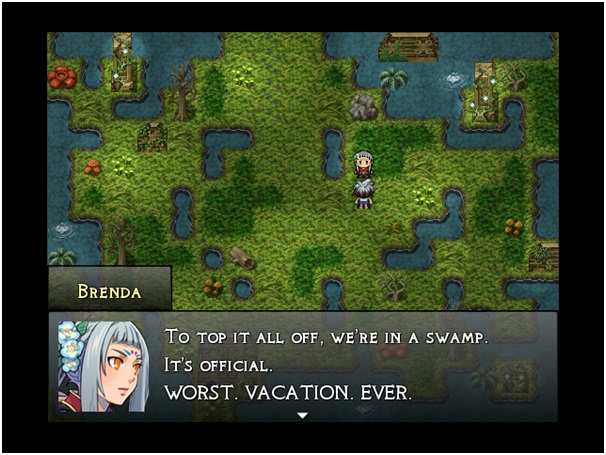 It's going to get worse.

The sprites for the main characters are all custom and the tile sets have been modified to highlight the colours and the work shows, the world is quite rich looking and a lot of fun to travel through, for all that there aren't a lot of maps available. In addition the music has been chosen with a bit of care and consideration and in most cases fits the usage pretty well.

The encounter rate is set punishingly high, with something like an average of 10 steps, which would normally be a reason for me to rage quit, but one of the features in the game is the set your own encounter rate system. If you don't like random encounters turn them off, if you like them crank up the percentage and be engaging in battles ever step or the way, and I mean every step. It was actually a really useful tool to manipulate during certain sections of the game, in the area with the puzzle I turned it to zero so I could move around to push the boulders where they needed to go without being bothered by random encounters, and then when I felt the need to go up a few levels I pushed the rate up fairly high to grind fast. It was a great little addition and I wish more games had it. I would probably dislike random encounters much less if they did. 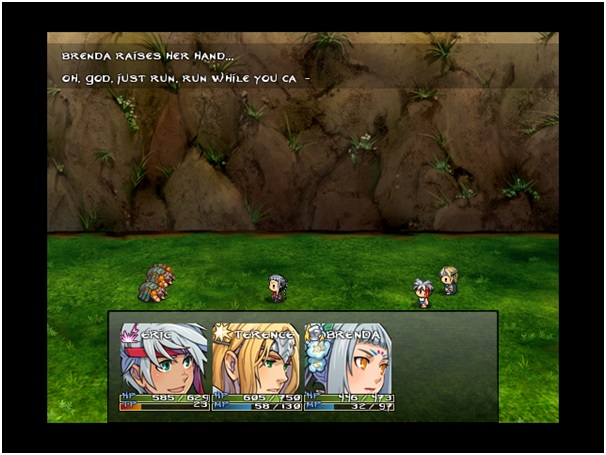 Those custom skill comments are a really great touch.

There is one of the classic push boulder puzzles in the game, though in this with a slight twist, the majority of the boulders are hidden by overhanging architecture so it makes finding a way through them more problematic than it should be. I understand the developer didn't want it to be too easy, but it is a jarringly clumsy attempt at difficulty enhancement in what is otherwise a quite polished game.

So after finding a swamparadise resort and discovering it caters entirely to a monstrous clientèle, except oddly for a rest and recuperation tent on the front lawn, er, swamp, our intrepid heroes run afoul of the condescending concierge. It's a form of patronisation that can only be achieved by concierges, seneschals and bespoke tailors. I believe they have to complete a course to qualify. 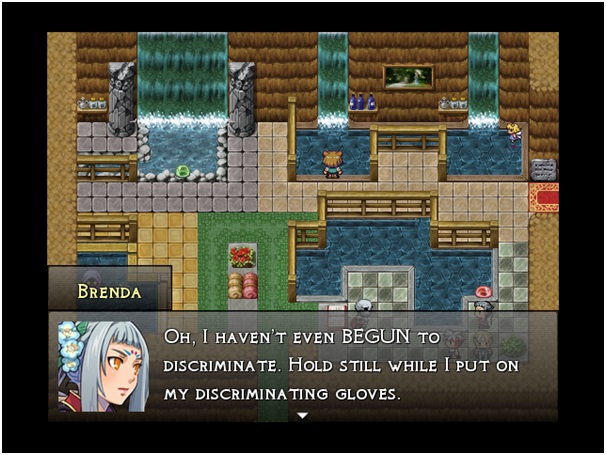 My kind of girl.

Deciding yet again to follow Falstaff's advice our heroes make a break for what they hope is the way out of the swamp and come across the villain of the piece. The exchange that follows is hysterical but does eventually breakdown and lead to the boss fight of the game. Hopefully you've spent a bit of time hanging around the rest tent and upping the encounter rate to once more into the breach levels (I seems to be stuck in Henry V for this game) otherwise the Evil King™ is going to wipe the lavender scented lava bath with you.

The majority of the game is spent grinding up to ensure you survive the final battle, which is a bit of a shame since though the combat isn't a particularly weak point it's not anything out of the ordinary either, except for those imaginative skill messages. I probably would have enjoyed it more if I could have experienced more of the unique brand of humour that is the interactions between these characters rather than on battles. Here's hoping that the developer expands on this universe one day and brings them back as I would really like to play a longer game with them.

Oh, and stay for the credits