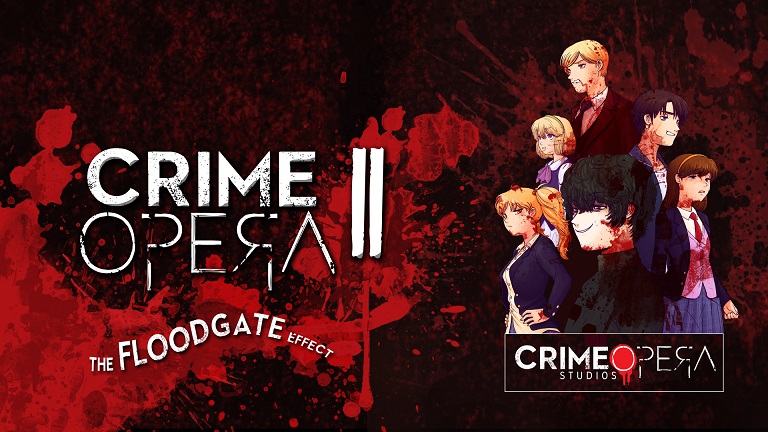 Once again, I thank you all for your support!

Hey everyone! We're back! Yes, this used to be the "Mafiosi 2" page before I took it down last year. It's now being completely redone as the proper Crime Opera sequel, just as the first one was reworked.

We are launching the kickstarter on Nov 6th. Everything is well on track to get this thing finished up in the next year, and it's looking pretty sweet so far.

The whole team from CO1 is returning, I'm proud to say. The character art is all done (with the exception of a few special scenes we'll be doing last), and the backgrounds and soundtrack are being completed right now. I just need to get these last few funds to finish them off.

As with the first game, I don't expect it'll make it onto steam. I think we may have pissed them off when the kotaku article went live, but we'll see. I do plan to try and get it on consoles again though, so I'll be reaching out to eastasiasoft once more when it's ready to go.

Thanks for your continued support! Glad to be back here with the news!

I finished my playthrough/editing session today, so everything is finally available online for you to enjoy!

I released Windows, Mac, and Linux versions all at the same time, unlike what happened with the first novel in the series. Kinda unfair to make other users wait, so it's all there.

Thanks to all who have been following along with this novel, and look forward to seeing Mafiosi 3's page up sometime this week!

Yes, I wrote the last two chapters of MAFIOSI 2 today! It's been about 6 hours of work throughout the day, so I was determined to have this done tonight.

I know what you're thinking, "Where's the download?". I still need to add the music and read through the last 6 chapters before I can release it, so you'll have to wait just a little while longer.

So, expect a download very soon, like over the next couple days or so. I also plan on putting up the Mafiosi 3 page over the next week too, so if ya want to avoid spoilers in M2, don't look at it until you're finished reading.

I knocked off chapter 19 last weekend, and finished off the 20th earlier today. The novel is at 80,000+ words now, with only four chapters left to be written. I'm definitely getting excited for the ending, when the ideas in my head will finally become words on the screen.

There are so many little details that I keep having to work out along the way, but luckily, it's been going well so far. It was much easier during my unemployment stint because I could just pick it up whenever I wanted, but now I'm back to weekends only. Being so close to the end, however, it has really pushed me to keep at it. As Mafiosi 3 will be yet another new beginning, I expect I'll be eager to jump into that right away too.

Expect another update after the next couple chapters are completed. We're almost done!

Crazy week. Got a new job, went to a big wedding in Toronto, and now we have the third release for Mafiosi 2! Only 6 more chapters to go and it's on to Mafiosi 3!

Each chapter will take you roughly half an hour to read. I'm confident that this newest release is well worth the time, especially if you've already read the previous released chapters. I'm gonna try my best to pull all the strings together for a satisfying conclusion (as soon as I possibly can). With the new job, there are bound to be some hiccups in my writing time, but I'm still aiming for another 3 months or less.

Anyways, hope you enjoy. To those waiting for a final release before delving into this novel, the wait is almost over!

Just finished chapter 17, so we're getting really close to the third release! Just gotta do one last chapter, and then do my read through edits.

As should be expected, I didn't get anything done over the holidays on this. Just too much going on all at once. It's also a bit overwhelming, launching into the final part of the story and trying to make sure all my loose ends are tied and that there aren't any blatant plot holes that I may have missed. Unfortunately, that can happen when a lot of things are happening off-screen. However, I'm finding new ways to tighten everything up as I move along, so I get more and more confident with each passing chapter.

To loyal readers, I request that you stop on by VNDB (Visual Novel Database) and rate the first game if you have an account there. It's doing about as well as expected thus far, albeit with only 4 raters. I'm hoping this sequel will have better results, as I truly believe it's a much better piece of writing overall.

Anyways, the next blog may just be a release announcement. Stay tuned!

I hate posting a blog every time I finish off one measly little chapter, but it *has* been almost a month since the last update. Apologies for that.

I spent most of this month getting the rest of the Mafiosi 3 project ready to be worked on. The music is all picked out and all appropriate info has been entered into the Ren'py engine. Aside from a few small sound effects, it's completely ready to go! I even put in the titlescreen background into the engine, along with the titlescreen music. It looks/sounds incredible!

As for Mafiosi 2, I just finished chapter 14. Yeah, it took me this long to get to it. I know.

You know those chapters that when you begin writing them, you know the A and B, but you don't quite know exactly how to get from the A to the B? It was one of those ones, but it turned out great! I actually ended up building on a relationship that was previously (practically) nonexistent, so that'll add some extra oomph to the rest of the novel and its sequel. Wait, shouldn't I say sequel*s*? Haha, cryptic. Maybe death is at one of their doors, or perhaps both of them!

Being that I'm halfway through Mafiosi 2 (more than that now, actually), it's time to start putting together the pieces for the masterpiece of the first trilogy. Yesterday, I began the groundwork for the project in the Renpy engine, and that will continue throughout the week until it's all finished and ready to go. All the artwork has been ready for quite some time, though I added a few extras in this week (because I really had no choice). I need to find some new music, since my regular site I was using is having server problems (it's like completely dead).

The most exciting news, however, is that I was sent the final poster for Mafiosi 3 last night from my friend (who previously did the other two titles as well). It's awesome, as always. It's more in line with the 2nd novel's poster, with a black background, and a bunch more blood splattered across the title. Of course, the 6 narrators are also shown above the words, as usual. Someone (or someone's') has/have been replaced, however, just as with this entry in the series. Expect that to keep happening.

As for the current novel, I'm finished chapter 13, minus the TIPS. Real mindscrew of an episode, I'll tell ya, and one that I was really happy to write.

Thanks to everyone following the series! It's really fun stuff to write!

Well, I got through editing four chapters today, so here's the 2nd release!

I'm pretty happy with how it all came together, aside from a few narrative hiccups in the 12th chapter, which I hope will be forgiven (since it's only Maya talking). Now I can get right to work on chapters 13-18. Again, I want to try and bridge the gaps between releases a bit better, but we'll have to see how it goes. I'm still looking for a job, so...

Anyways, all feedback to this point is welcome and encouraged (not to mention greatly appreciated). Stay tuned for more!
Pages: first 12 next last