"Sword of Light III" was developed by Gamer91112 using RPG Maker VX Ace and serves as the final entry in the series. An entry that makes the first game seem like a master piece in comparison. And considering I considered that game merely average. You can safely assume that I absolutely loathe this game. So much so that I almost considered not finishing it, but after calming down a bit I figured I might as well slay these beast once and for all.

The story starts out pretty basic with the player learning about a dark lord that is ravaging the land and leaving misery and death in his wake. And the only way to stop him is by cutting him down with a legendary sword that was forged by a legendary blacksmith. Unfortunately the dark lord managed to steal the sword before the blacksmith could deliver it to the chosen hero so now we'll need to climb the dark lord's dark tower in order to gain the sword we need to cut him down.

And to make the story feel even more cliché the hero's mentor is cut down, but much like Obi Wan Kenobi our mentor is still able to pass on advice from the other side. Advice that starts to get annoying real fast since it means the game is constantly holding your hands when it comes to combat.

And while that aspect of the game is super annoying and makes me wish the characters would just shut up. What makes matters even worse is that the characters will sometimes go on long drawn out rambles that add so little to the overall narrative that at one point I started yelling at the various characters in the game to shut the %$## up and just left me fight. Jeez, the game tries to turn this aspect of the game into a joke at points by having the dark lord make snide comments about how the king and the legendary blacksmith never shut up. He even casts a silencing spell on the blacksmith at one point. 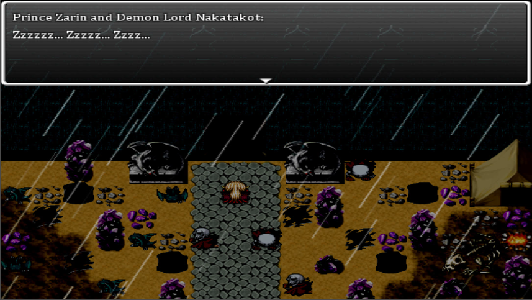 And both the chosen hero and the dark lord fall asleep after listening to the blacksmith ramble on for a while about how he forged a legendary bow. Unfortunately trying to make a bunch of meta jokes about the characters talking too much doesn't make the lengthy dialogue scenes any better. It just means the developer was well aware the character's talked too much.

On a plus side the game allows the player to switch between various weapons and armors during combat. This allows the player to adjust on the fly to certain situations such as giving up access to skills for better protection against enemy attacks and vice versa. Though I do wish this game allowed the player to switch between accessories as well since the Venomfang Necklace dropped by the Demon Vipers would have been really useful against the dark lord since it allows your weapons to inflict the poison status on your enemies. And if I had the option I would have had it equipped at the start of the fight, but the game forces you to wear legendary accessories during the fight with the dark lord. So your forced to give up the Venomfang Necklace in favor of an accessory that gives you passive healing. Admittedly that healing is pretty useful but being able to poison the final boss would have been nice considering he has over 750,000 hit points.

The sad part is the final boss isn't the only enemy in this game with an absolutely insane amount of hit points. Some of the regular enemies have well over 200,000 hit points as well. This means battles tend to feel needlessly dragged out in this game since your best gear usually only goes a couple thousand points of damage at most. Thankfully most of the weapons do get a buff when the enemies hit points fall beneath a certain percentage, but it also takes a turn to swap between gear until you gain a high level skill that lets you do it on the fly if you have 50 points of fury to waste on the fast equip skill.

And while the game boasts about the switching system. You'll be spending the bulk of the game in the knight's armor since it grants you immunity to physical attacks at the expense of losing access to your special skills. Though why a paladin would need to wear light armor to cast various types of divine magic is beyond me. Though I suppose this does mean this game goes on against the grain a bit, but you'll need to wear the knight's armor for a lot of fights since the enemies would easily kill you in most situations otherwise. So you'll usually open up a lot of the early battles wearing light armor in order to set up a healing banner that works overtime and then switch into heavy armor so you can regenerate health before dropping another banner that inflicts damage overtime. And this banner often times does more damage than the player's weapons do.

On a more positive note the game's final boss actually throws a few different change ups at the player during the final boss fight. So your forced to change your strategy up a little bit in response. On the other hand the final boss possess many attacks that bypass the player's abilities rendering certain defensive and status inflicting skills almost entirely pointless. This is only made worse by some of those skills only becoming accessible to the player shortly before the final battle takes place.

The game relies on a combination of the RTP, store bought resources, and seemingly custom assets. At least I hope the bulk of the enemy sprites are custom.

At least I hope enemy sprites of this quality were custom works. Or at the very least they were hopefully free since I couldn't imagine spending money on graphical assets of this quality. To make matters worse the bulk of the enemy assets clash with the rest of the graphical assets used by the developer. So not only do they look bad. They don't even match the aesthetic of the rest of the game.

Sound wise the game relies on the RTP for the most part. Apparently the developer decided to try their hand at voice acting at a few points as well. And this didn't really go that well in my opinion. In fact, if this game didn't piss me off so much I probably would have burst out laughing at how badly delivered some of the lines are.

For example the above line is voice acted, but the line is delivered with about as much passion as someone giving you a sorry, not sorry after they've unleashed an absolutely rancid fart within the confines of an elevator.

And before I offer up my final opinion I figured I should point out that this game contains a major eventing error. During the final battle with the dark lord the game has a cut scene that triggers during the mid-point of th final battle that causes the player's character to take two steps down.

The problem is this isn't possible if you open one of the game's final three chests from certain positions. And if you open the final of these chests in a position that makes these steps impossible your only recourse is to close the game and continue from your last save point. If you were smart and saved before beginning the final battle you'll only lose about twenty minutes worth of your time. If your like me though then you'll need to run through a bunch of trash enemies the boss tosses the player's way before the final engagement all over again. So it took me the better part of 45 minutes to get back to this point. Which is just fifteen minutes shy of the developer's estimate for reach the half-way point in this game.

"Sword of Light III" is undermined by lengthy dialogues, clashing visuals, and combat that tends to be really boring due toe enemies having excessive amounts of hit points. And while the game does have a few good ideas going for it like being able to switch between various weapons and armors. The implementation of this system leaves a lot to be desired since you can't change your accessories or switch on demand without a skill you get near the end of the game. As it stands this game just isn't worth checking out in my opinion.