Hello and welcome to... The Most Stupidest Game Ever - Re-duh!
I admit that when I started this game I expected one of these "lol games", as they called them in the old rpgmaker community I was into during the 2008-2012. These cheesy low-quality rm2k and rm2k3 games were frequently silly, with no-sense humor, for example I remember one in which you played as a giant egg and you had a bard and a talking alcholic cow as companions. But luckily, despite the title, this game was a bit different, I mean there is no toilet humor and the gameplay is pretty good, anyway let's start from the beginning.

In this game we play as ... Alex? No the hero is Herbert and he's a Alex lookalike that was just released from prison. Unfortunately his old house was sold to a priest that happens to be a kung-fu priest (I suspect that his voice comes from Father McGruder from Braindead, the kung fu priest or ninja of God in some versions). Guess what? He is defeated in combat, so he decides to find a real warrior that can help him, but this will lead him to an epic voyage in some mythical places like the City of Mages, the Smurf Village, the Dwarven Prison and so on...
Game plays like a classic Rm2k3 game so expect dungeons, random party-based battle encounters, wandering merchants and... arrogant save points? Well yes, those are present too! 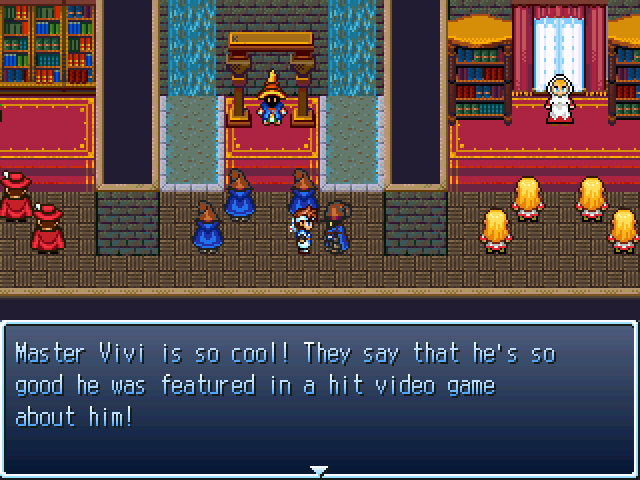 Let's start with exploration: well that's the usual rpgmaker classic, you go around on the main map (where you can save anytime), enter villages and dungeons, and interact with people. Well you must interact ith everything to see all the funny scenes and silly moments of the game!
Second, there is combat: it's classical Rm2k/rm2k3 combat with front view enemies and abilities that cost energy points. No need to grind, still some combat encounters, those against bosses, may provide some difficulty, especially that one that can paralize the party members, really annoying (the random enemies are often pushovers! Good thing since the game uses a save-points system). Each character learns earn new abilities levelling up, anyway remember to stock consumables, the wandering merchant is available more or less everywhere, and to look around for hidden loot.
Third... yes, there is a third! The game includes some diversions from classic combat and humoros dialogues, let's see some of them:

For example there are some puzzles, some banal and easy (press the button/activate the lever), others pretty tough, like the teleport maze (that's quite annoying) and the button puzzle that I know will be a stopping point for many players, especially considering that the developer was so sadistic that decided to put the save point AFTER the puzzle! But I, the RpgmakerAddict, I am here to help you! Look below if you are stuck!

Show
basically there are 25 buttons and each add a number of points to a total equal to its position (first button adds +1, second adds +2, third +3 and so on). The objective is to reach 74 points exactly (the number 74 is indicated by some rocks in the dungeon).
So what I did was pressing the buttons nr. 2, 23, 24, 25 for a total of 74 exactly! 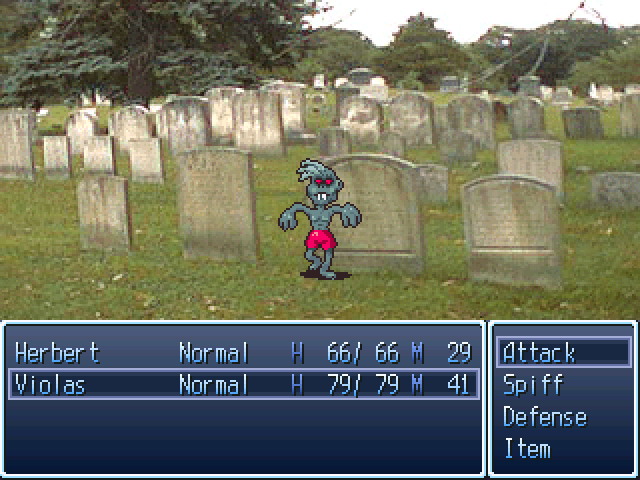 Then there are also a timed section, and duels, these have different variants but basically these all works like some sort of rock-scissors-paper game with the addition of the healing skill. Luckily these aren't too difficult, I failed only once. That's a matter of luck, but I think that the player apparently has some advantage, anyway these aren't a bad diversion even if they become a bit repetitive.

The story is... absolutely bizzarre (what do you expect from this game?), expect a lot non sense, and various events from travel by boat, a prison break, and so on... I mean the story isn't really coherent but this is supposed to be a stupid game, so ok, play and have fun.
Also expect lots of references to Star Wars, Lord of the Rings, Pokemons, the Monty Python, the Smurfs and various Final Fantasy games.
Mapping is... well... let's say average, and I'm being generous (this made me think that I complained about Three the Hard Way and A Blurred Line mapping but... here is no better). No really, some maps aren't bad at all, but most of them aren't that good since they're pretty large and empty or complete with some errors like caves in which you cannot enter (I'm talking about the one with the moogles), at least there is some Rtps but the use is limited since there are lots of charsets and sprites (like some of the monsters, for example) that are edits or come from entirely different games. I liked many of the stylistic choices, of course many of the style clash are due to humor reasons, see for example the appearance of Glass Joe (the easiest boxer to defeat in every version of Punch-Out!!) that replaces the usual low level enemy frequently represented by goblins/slimes in most jrpgs.
Sounds are likewise ripped from various sources (like the "kick ass for the Loooord!" mentioned before that I guess ripped from Braindead) and default sound effects, anyway a good mix. 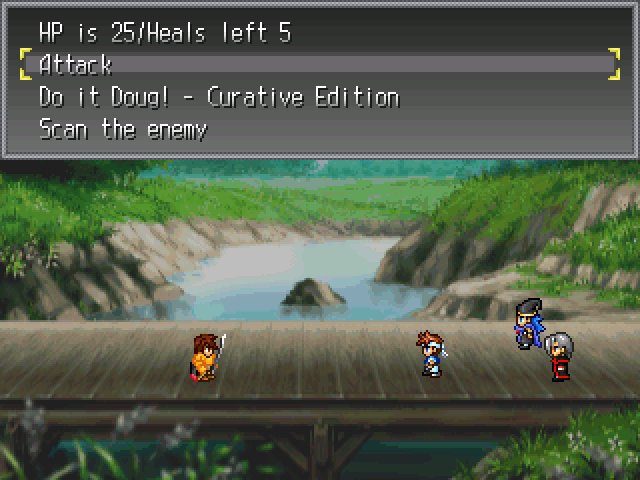 Final Verdict
I expected a really stupid game. No, wait, a REALLY STUPID game, instead this is a pretty ok game, entertaining and fun, and less stupid than what the title would suggest. I admit I started the game with really zero expectations, instead I found it to be not only longer than I expected, but also varied and fun.
That's not to say that there are no annoying parts, because there are some forgettable moments (like that terribly long and dull forest part! That's one of the reasons why it won't earn the 4/5 rating), but overall it's a positive experience, and a real classic, from what I've heard.

The Most Stupidest Game Ever - Re-duh is a game that will make you laugh and curse at the same time, but in the end it's pretty good and worth playing. 3.5/5 for a classic Rm2k3 parody game. Dumb & fun.