6 reviews
Save to Dropbox
Warning: This game contains a minor CG of partial nudity


It started when Raven's older brother Yuni brought home a little boy named Keldanite for the night. He went to stay with her mother's friend Brueta. However they became close friends. Now twelve years have passed, and they are members of a guild called Defenders who helps others.

Some of the battlers are from CLOSET

Some of the battlers are edits from Lud Sakura's site, and Chaos Portal's Site.

I cannot remember for sure who made the dog sprites, or the cat face I am using. If anyone knows let me so that I can credit him, or her.

Zonderland Music Pack (Only in title)

Some of the music for boss battles is from here http://sound.jp/foceal/

The normal battle theme, and some of the Town music was made by my friend StormKat32

Special thanks to TrueCynder from RMC for touching up the dungeon maps.

If there are any bugs please tell me exactly what they are, and where they occur. This is the full game of arc 1. Nothing will be changed. Only bugs will be fixed at this point.

I just wanted to let everyone I fixed a mistake I made with Raven's Revive skill so it should show up now.

author=Roy
No matter what I do to open it...it doesnt want to.

Sorry but please tell me what it s that won't open?

@BurningTyger
Thank you. I'll pm you the game file after I finish the remaining chapters.

author=Roy
No matter what I do to open it...it doesnt want to.

Sorry but please tell me what it s that won't open?

ok....whether I try to open it with one of the the zip options, archive, plain old open, right click, double click.

Unconfirmed 98136 download...there I bet THATS what you need to see.

Never mind...I dl it again and it works! Thanks for the offer to help me.

Close
03/14/2014 10:15 PM
Hello! I started playing your game and took the mission to kill the bugs in the man's basement. After I beat them, the game made the main character invisible. I got a screenshot of it. 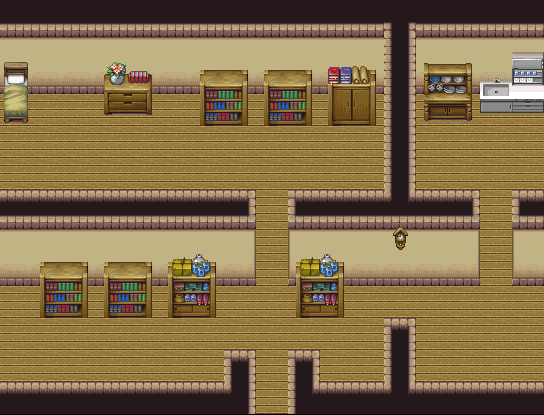 Close
03/14/2014 10:48 PM
@unity Thank you for pointing that out. I forgot to turn the transparency off. It's an optional quest so just don't do that one for right now. I have that fixed for the next release that is going to be the full game so don't worry. Just don't do that mission for right now the others should be fine. Again thank you for pointing that out.
Rose_Guardian

Close
03/15/2014 08:32 PM
Sorry for double posting just want to let you guys and girls know it is updated and all of the chapters are playable now till the end of the game but there will still be more updates.
Roy
265

Close
03/17/2014 12:18 AM
it may well be painfully apparent but i dont see how money is made. I am level 5 and no money to buy any weapons or...well anything.
Theres one shop or house where you can walk around the black perimeter. Toms house or something?
Also when I fight the guys with Haiku no matter what I hit them with they take lots of damage but never seem to die but all my lot get pinched.
Rose_Guardian

Close
03/17/2014 01:08 AM
You only get money for doing side quests. The quests are in the menu. Also you have to grind in this game. I tested it, it's fine. Sorry if I sound rude. The reason you cannot seem to defeat Haiku is because you're not leveled up enough. It's not a glitch and I didn't make a mistake there it's possible to defeat him. I made sure it was. Also thank you very much for pointing out the passibilty mistake I greatly appereciate and will make sure that is fixed in the next release. Just make sure you do the side quests and there should be items in the treasure chests in the forest. All I can really say is when you fight Haiku, spam heal. Belle's heal, heals all party members. Also try to reach a higher level before you fight Haiku.
Roy
265

Close
03/17/2014 12:44 PM
I didnt think you were rude...if I sounded so forgive me. I was wondering about the side quests. Right off the bat there was one about rats in the basement but you cant go down there. Speaking of grinding I thought I was ahead of the game a bit by just doing nothing BUT grinding until I got to lv 5 and since the fight with Haiku was at the beginning of the game, the first fight should have been a bit easier. I dont mind it being hard but I am wondering what level would have been better the first time.
Also I am needing to save every other fight or so since the game freezes frequently.
Rose_Guardian

Close
03/17/2014 12:53 PM
@Roy It's okay, the RGSS Player stops working for some reason. I am unsure why. Usually if you close out the game and continue playing it should be okay. I really cannot fix that problem and I have no clue why it happens. You could try to get to level 10 for the first boss fight. I managed to defeat him without a problem. I made the forest sort of long so that people playing could level up. I made it so that you could level up fast because I felt that the characters were leveling up too slow. So you should be able to level up rather fast. The quests in the menu are completely optional but I recommend doing them because it is the only way to get money. However you do get money after clearing some of the chapters not all but some. This maybe a spoiler but, after chapter one Silvia awards you 1000 coins for capturing Haiku. Also you should be able to go in the basement in Ron's house you just have to talk to him first.
Roy
265

Close
03/17/2014 01:07 PM
Thanks! Also I did talk to the man outside who tells me about the rats. Thats why I was surprised about being told not being able to go down there.
Yes thats what I do when it acts up, close it and start again. Good thing to constantly save!

Close
03/17/2014 07:21 PM
You're welcome. By the way I do have another update when my mapper is done touching up the maps. Also I figured out how yanfly's new game + script works. That means in the next release you'll be able to save after the last boss fight and copy your save file for this game to the second game after I finish this one and release the second game.
Rose_Guardian

Close
03/18/2014 09:41 PM
Sorry again for the double post. Just to let everyone know I went a head and re uploaded the game again since I figured out how yanfly's new game + works. You can now save after the final boss fight so that you can copy your save to the second game after I release it(The script will allow you to do so). The next update is just going to be improvements on the maps.
Rose_Guardian

Close
03/28/2014 01:38 PM
Sorry for the double post but there was a glitch pointed out in a review at RPG Maker VX Ace.net that prevented the player from going any farther. If anyone has encountered this glitch please tell me where it is and what quest it is so that I can fix it.
Rose_Guardian

Close
04/02/2014 01:30 PM
That's weird. The quest is optional and so are the quests in the menu. I'll take a look at it and see what is wrong. For right now just skip that quest and continue with the story. I will have to figure out why it is doing that and fix it.
Pages: first 1234 next last