Let's have a look inside the freezer


Often when a new developer comes to RMN and asks for advice, the one thing they are frequently told is to not be too ambitious. Keep your project simple. Back in 2014 Craze came up with a game idea for a 2 day event. This game idea would lead to a community collaboration to make a massive game with 30 unique characters, each with a back story and special skills. And I have no doubt that if Craze were to develop such a game by himself this might not be an issue (provided he had the motivation.) The issue here seems to be the community part. 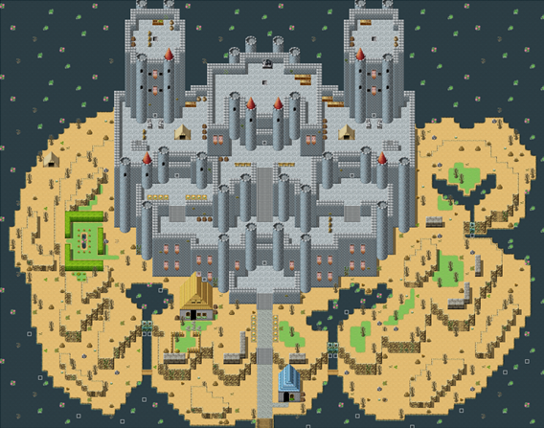 An impressive map. A lot of work has gone into this game.


Wyrm Warriors has been in the deep freezer for quite some time. And I'm not so confident that's going to change in the near future. The demo is actually quite impressive with what is shows. If this game were ever completed I would have no doubt that it would be a classic. Now let's look at what it has to offer.

Andri, Rosie, and Lorence go to a ruined castle because they were told to in a dream. Here you will meet Wilford, the Bulter of Prophecy. He will tell you about how Wyrm Wizard has put a curse on the land and that the king is trapped in the Realm of Nightmares. King Aremen will show himself to you and give you the Craze Crystal (expect the name dropping and RMN reference to be abundant.) Now you need to find 27 other warriors in order to defeat the Wyrm Wizard. Story set, missions go!

You can get other party members by often just talking to other characters. Some might ask you to do something, but many are very easily convinced to just up and join your party.

The tile mapping is RTP, but there are custom graphics to be found in the character faces, enemy battlers, window screen, and perhaps some other things I can't recall right now. The music is a mix of a whole lot of different things. I heard things from the RTP, the RMN Music Pack, and some other things I didn't recognize. The mapping in a lot of the areas if fairly competent. There's obviously some strong developers behind this game.

The combat system is front view and features many Yanfly scripts. You have 5 party members in battle at a time, but you can change party members while in battle (I mean you'll have 25 other choices to choose from!) Enemies appear on the map, I was sort of thankful that this sort of game didn't have random encounters. There's a lot of areas to explore and if you go off the beaten path you can get a treasure chest or two.

The game has a lot of other features to go through. When you find an item it actually increases your item capacity for that item (and when you recharge your crystal it refills your items.) This is a cool idea. Dungeons have doors that can only be unlocked by having a certain number of party members. So you'll really need to explore to find them. The game has level caps on the characters that are lifted once you defeat a boss and destroy a crystal. And each character has passive abilities and special abilities unique to that individual.

This was a very good demo. There's a lot of great features in it. But this game is very ambitious, as said before. I don't see how something like this can be finished without some very sheer dedication and will power.

Close
06/05/2017 11:03 AM
I feel the game feel apart sometime around when the community was asked to make maps. When the reigns of the project moved to unity, I think there was renewed interest for a while. I don't know how many maps were submitted during that time, but, she pushed out the demo that you played. Eventually, she had to just step down from the project, and it's been on hiatus since.

I kinda feel the same thing happened in regards to Liberty's Apon the Brow of Tomorrow, Clear, though that's probably a sadder story, as there were two games before it! Still, there was this expression of interest, but the number of maps that were submitted were minimal, at best.
Sunflower Games

One person might need to take what's here and finish everything by themselves. That's likely the only way it can be completed at this point. I didn't really pay too much attention to this project until this event occurred actually. I knew of its existence, but not much else.
Cap_H

Close
06/05/2017 12:33 PM
I remember playing the demo. It was a solid game, but unity got better meanwhile or at least her projects are more intersting now. I think that this is long past its due time.
I think that there is space for community gammak and I would like to see another game with unity on board.

I quite like the review too. It's short yet manages to mention a lot. A very informative read, I reckon.
Liberty

Close
06/05/2017 09:20 PM
I'm still a bit bummed it never got finished, especially after I commissioned that cool shop script for it. Well worth the money it cost me, considering how well it works in the frame of this game. Maybe I should ask Marrend if he'd like to use it for his new Suikoden game.

There's nothing stopping from someone finishing this game, or a couple of people. Keep what's there and just finish it. Maybe some fresh devs to get it done.

But if we're really looking at finishing something it should be Befuddle Quest 7.
(Yeah, I'm never letting that one go.)
Marrend