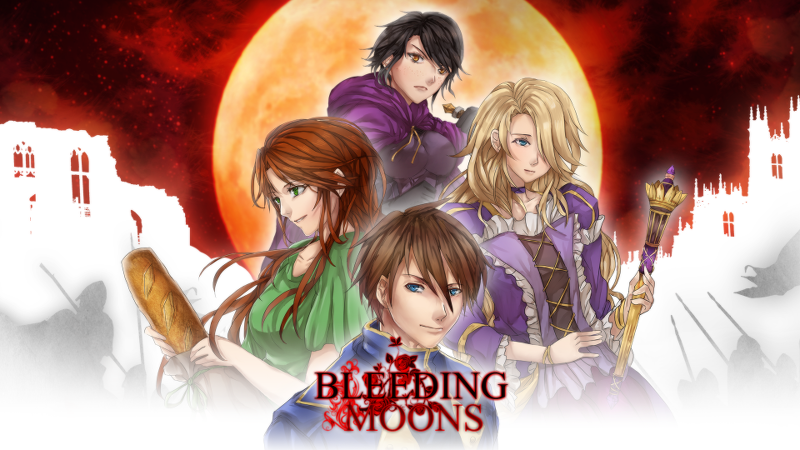 While it only has 3 review on Steam so far, they're all very positive about the game.
And all 5 players' reviews on GOG are positive too, rating the game a 4.6 out of 5!

Thank you and don't forget to leave reviews for the games you like ;)

You can find it on my publisher's official store as well as on Steam and GOG.

Thank you to all my fans and supporters. Your patience is laudable after all these years, but I can promise it was worth the wait.

Now you can finally play the full game and see why it has won so many awards already!

And now, ladies and gentlemen, the release date!

It has been a long journey, longer than expected, but the end result was well worth the delay.​

Thank you to everyone, especially my day one fans and my publisher, for supporting this new kind of storytelling.

Less than a month until you can enjoy it too!

Bleeding Moons is taking part in the Steam Summer Festival!

Bleeding Moons is taking part in the Steam Summer Festival!

You can find an all-new playable demo in the store page:
https://store.steampowered.com/app/874060/Bleeding_Moons/

Don't hesitate to wishlist the game if you like it!

Soon™ but not yet

As I am looking to provide the best English version of the game I can (if you can't read the original French one also included), my publisher and I have decided to make another pass at proofreading and rewriting anything that can be improved.

Short version: the game is delayed until 2020 to give us the time to make things the best they can be.

Sorry for the delay, but I much prefer a polished released than a hurried one. Thank you for understanding.

Sorry to keep you waiting, please bear with me for a little longer!

It’s been a long time since last update.
Like, a year.
Sorry about that m(__)m

Each time I thought I’d be able to tell you good news, something got in the way…
When more than 1 people are involved, you increase the risk of having real life events delaying work here and there.
Nothing too serious, but enough to lose many months compared to the original release plan.
And since I (and my publisher) don’t want to rush things when it’s not needed, well, the game is not out yet.

Actually, I still don’t have more to tell you now, just saying that the game is in good hands.
Only peripheral activities are remaining on the to-do list (another pass at proofreading, a new trailer, PR stuff) and I hope (once again) to update you with more exciting news soon!

The beginning of a new journey

It's now live: Bleeding Moons will be published by Phoenix Online Publishing in the second half of 2018!

It's the beginning of a new journey, an exciting one!

Better than a thousand words 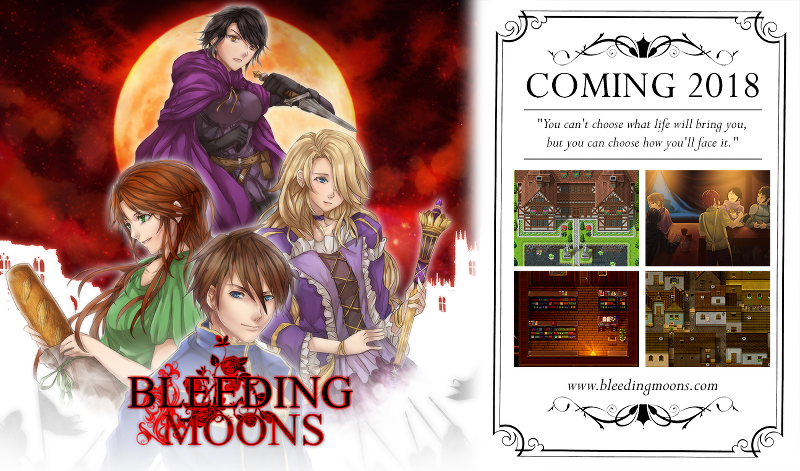 Yes, Bleeding Moons is done and will be released this year!

I have contacted a publisher I'd really like to work with and now I am waiting for their answer.
This might take a while. Several weeks is not an uncommon waiting time, or so I've heard.

In the meantime, have a look at the trailer for Bleeding Moons.

I'll release an updated demo soon, after I have news from my potential publisher in case they want to change some things first.

Thank you for your patience. It took a bit longer than expected to get to this point, but it'll be worth the wait. Mark my words!

Are we there yet?

First, I want to apologize. It's been such a long time since last update, sorry (-_-);

As December is coming, I have to tell the bad news: Bleeding Moons will not be released this year...
Several times I hoped it would be done, but there always was something in the way.
Not major issues, the game is all right, but if I want to seduce a publisher, I need to have the most complete and perfect game possible, including peripheral assets. After all, they don't know me and I can't show them an "almost done" product.

Now, what happened during those past months?
First, the rewritting of the English text for the complete game is done.
It took a lot of time to fix my broken English but, at last, you will be able to play with decent English on screen.
All this work has been made by a native American and I made sure that the rewritten sentences kept the same meaning as the original version.
Since most people in the world will play Bleeding Moons in English, it has to shine!

Second, there are now illustrations added to some of the cutscenes. One of them can be seen in the (upcoming) new demo, when the children Ian and River meet for the first time: The full game includes more illustrations, of course, but since they would be spoilers I can only show you this one: Once unlocked, the full-sized images become available in the game's directory.

What do I need now before releasing the full game?
The key illustration for the game is currently underway. The sketch is already looking great!
The trailer for the game is done (more about it later) and the website to showcase the game is under construction.
But more importantly, once everything is ready I can contact a publisher to handle the marketing side of Bleeding Moons.
I have a few leads but it's too early to say anything right now.

In the meantime, I continued to work on making games and I can say that my next game's story is completely written.
Production has already started, I'm currently drawing the maps.
This new game (with no definitive title yet) will be a Visual Novel in its gameplay, set in the same world and at the same time as Bleeding Moons. It is an independent story but will bring a new light on shared events.
And it will be free, because I wanted to give you something in exchange for your continued support all this time.

You can only take my words for now, but all the people who playtested Bleeding Moons were very positive about it!

The game has already reached its 1000th download!
Thank you to everyone who got interested enough in my game to give it a try.

Bleeding Moons is closer each day to its release. I have finished manually translating the 174,000+ words from the original French into English. As you're reading this, the English version is currently in the hands of a native American English speaker who will help me by reviewing and fixing it so that you'll have a much more natural sounding English from day 1.

I'm now working on the trailer, which will also be a first for me! The prototype is looking good so far.

No new screenshot of the game this time, but instead let me show you some cute artwork of the main characters, drawn by Melaniipon: No ETA for the release yet, although at this rate I think early 2016 to be the most likely. There are a few things to do in addition to the game, such as the text revision and the trailer (both in progress), setting up a website for the game and finding a publisher to handle the marketing side.
I will also put Bleeding Moons under the Greenlight process when the new demo for the final game is ready.

In any case, I'll keep you informed on the matter.