The Good, the Wizard and the Cat

Howdy pardner, are you ready for a western?
Yeah, yeah, I know this STEEL WESTERN (all caps!) is a demo, BUT it's longer than one hour, and it's fun so it's worth your time...

stop right here, I've not finished my review, so wait a second and listen up, then you can play the game. In fact I've to explain something since this isn't your typical western adventure.
STEEL WESTERN is a RPG Maker MV game made by Toto_vT and the demo was released in 2018, and as I said before it's not your typical, "boring" western but... uhm let's see. There's a world that was once populated by humans and now it's a weird land filled with elves, robots and various bizzarre creatured. It's a wacky and colorful land that for some reasons reminds to me of the land of Ooo seen in Adventure Time. Really!

The game starts with a prologue in which we play an adventurer and an elf searching a cave, but this is just the tutorial, and it does not involve the protagonists but it's related to the main story and it helps learning the system.
The game is a typical Snes-style jrpg with atb side view combat, lesser enemies that can be avoided and bosses that must be defeated to proceed, puzzles, quest, subquests and much more! There are also some activities/minigames to get extra loot, if you want. 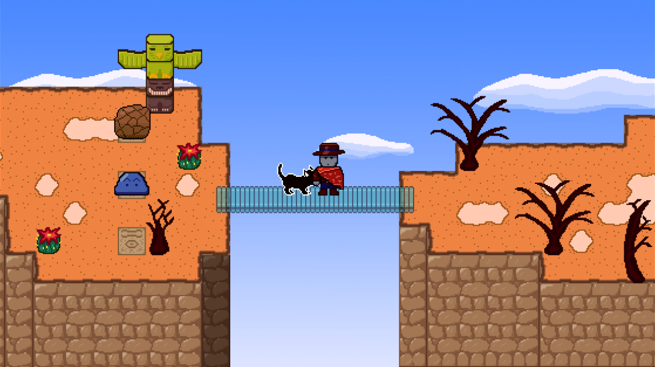 First puzzle... SOLVED! Good luck with the next ones!

The protagonist is a Robot Sheriff that has a simple quest: find who is killing the cattle and arrest him. In his adventure he's joined by an elf mage and a black cat named CAT. Unfortunately it soon discovers that the cattle exterminator is not a common bandit or outlaw at all... but this won't stop our lawman!

STEEL WESTERN is a fun game set in a wacky world: combat is balanced and the only enemies that dave me a hard time were the bosses. You can earn experience not only killing enemies (that respawn when you re-enter a map, but can be avoided, or if combat starts you can run away from them rather easily) but also performing secondary (fetch) quests that also gives some more substantial rewards. So no reason to skip them!

The shops... well there aren't any! Nah, it's the future and the vending machines are all you need: these awesome installations not only can sell and buy items, but they will also restore your party health, manage your team and upgrade your characters. How? It's simple, you get experience points winning fights, and the only way to spend them is using these vending machines, that will send you to each character skill tree, that are completely different, of course, and lets you buy both permanent upgrades and advantages and new abilities. The only thing that the vending machines don't do is saving your game, because you can do that by yourself anytime and anywhere! Very convenient, really!
Ok, now let's review our party members: 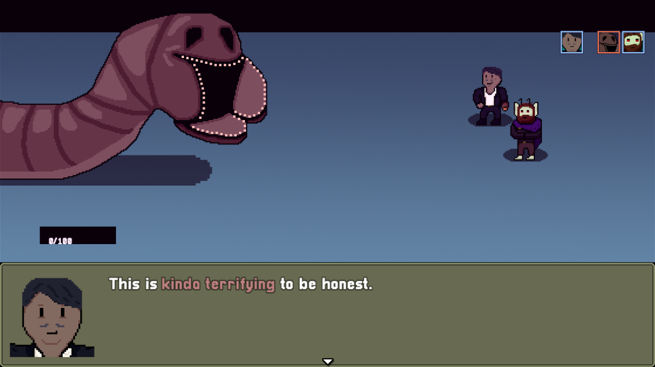 I must agree with you... hey, but you aren't the Sheriff and his friends, who are you guys? Well play the game and see!

We have the protagonist, the Sheriff (yes, that's the name!), a no-nonsense serious lawman bot that is clearly not interested in magic but specialized in physical attacks, using the arm-blaster (that starts as a pea shooter but may be changed with better versions). He has different aimed attacks (that cost TP, earned during combat) that can slow or weaken the enemies, and later he will learn a weird ability (that has no cost, use it as much as you want) that can cause random effects: it can heal the party or severely damage an enemy but it can also cripple or poison a party member.
Cat is instead a more versatile party member, with a decent attack skill (he uses a laser pistol. With his tail. Seriously!) and decent attack spells. Whizz-Gab, the elven wizard is instead all geared towards magic, and he uses the runes to cast his fire spells (of different potence).

Finally let's review the graphics and music: these are all original and well made by the developer, I mean the style is weird and colorful, looks like Space Funeral, even if less creepy and more lighthearted, this is in fact a more classic jrpg adventure that seems to go from saving the cattle to saving the world! Anyway both setting and characters are cute and funny looking, it's a sort of surreal postapocalyptic space western, or this is that the style evokes, in my opinion. Sounds and music are strange but fitting and good. What else? Well try it yourself! 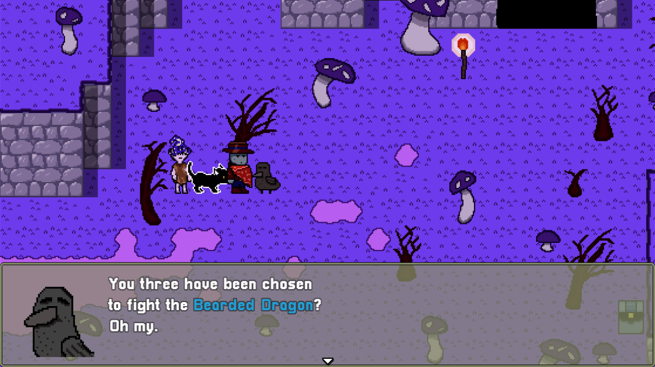 Final Verdict
STEEL WESTERN looks like a blend between Adventure Time and Marshal Bravestarr (ok, I am aware that these are two cartoons and not games!) inspired Snes jrpg. It's fun, and despite being a demo there is enough content to enjoy this incomplete, but intriguing story. Difficulty is well balanced, I think, only bosses were challenging, but with a good preparation you can win!
Ok, I never suggest to play demos, but this is one of the few that I can surely recommend!