0 reviews
Shortly after Aria's 18th birthday she decides to return to a research facility known only as "The Sanctuary" that she stayed at for a small portion of her life. While there she was together with her sister Ira, however since her release she hasn't seen her sister. She returns there to find what happened to her sister in hopes of tracking her down. However when she arrives she finds the Sanctuary to be in rubble, closed off and seemingly abandoned by its staff. Unsure of what happened and assuming she is alone, Aria enters the building regardless in hopes to find some clues to the truth about her sister's whereabouts, regardless of the red flags she senses.

Game Features
Sanity vs Knowledge: Pick and choose what Aria should learn, balance the scales, different interactions have effects on both Aria's sanity and her level of Knowledge, keeping a balance between the both is key to your ending. Remember Aria is only 18, how much stress do you think it will take before she snaps?
Multiple Endings: Based on your Sanity and Knowledge Meters, there are a total of 5 different endings (1 Good, 1 Canon, 3 Bad), the canon ending is the true ending to the game, and as to not spoil it, I will not be revealing the nature of the ending, just know that it is how Aria's story is supposed to come to a close.
No Combat: Enemies are just that enemies. They can harm you and leave you for dead, or they can end it right there and they are not to be messed with. Sadly Aria is just an 18 year old girl, with no formal combat training, though she can be resourceful at times, hiding is how you'll have to deal with the Sanctuary's monsters.
Various Puzzles: There are many things that must be solved apart from the main mystery, how will you navigate the halls?
Environmental, Monster, and Mental Enemies: There are three things that will cause harm to Aria throughout the game, the first being the environmental enemies, The Sanctuary is a decaying building, be careful of where and how you tread as the building falls apart around you. The second type of enemy within the game are the monsters, every place has their own demons, and these things are the Sanctuary's. Lastly mental enemies, Aria is an 18 year old, full of questions and sometimes the answers are more harmful to the mind then the questions taunting you on a daily basis.
Dark Themes:Loss, Grief, Mental Illness, Insanity are a few of the themes present within the game, along with many more.
Immersing Story Line: Aria is an 18 year old girl who will be experiencing the trauma that The Sanctuary has in store for all who have walked it's halls. Will you leave Aria in ignorant bliss, or will you search the halls for every hint and clue in search for the truth, regardless of the cost?

Over 4 years ago, I came up with a concept for a game named Dark Aria. Since then, I sadly had technical issues which resulted in the loss of my project, as well as many of the development documents that I had created for it. This led to me taking a hiatus from creating this game.

I am happy to say that I will be restarting this game's production come January 2017, this time using RPG Maker MV. Until then I'm doing as much prep-work as possible, from creation/gathering/editing of graphics, to re-writing concepts, profiles and story information, to programming and testing game mechanics.

Additionally I would like to look into recruiting a team to help with the creation of this game. At this point in time, I'm confident to say I'm familiar with sound design, art, writing, and programming, however these are only to an extent and I would be more comfortable if I had people who are even more familiar then I am in these areas to be able to work with, as well as add their own personal flare to the game.

As such I'm going to ask that anyone who is interested in working on this project with me, please contact me via DM. Thank you so much.

- Clarey
Inside of the Bunker

Outside of The Sanctuary.

The title screen, the artwork was commissioned by telivesion@tumblr

Close
05/02/2014 11:10 PM
This sounds like this game will be pretty cool. :3
I'm interested in the Sanity and Knoweldge meter. These sound like they'd be a pretty nice part of the gameplay :3
ClareyMarie 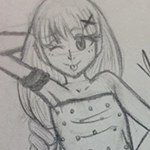 author=Delayed_Chimera
This sounds like this game will be pretty cool. :3
I'm interested in the Sanity and Knoweldge meter. These sound like they'd be a pretty nice part of the gameplay :3

Thank you, the basis behind this is finding a balance between what you know and what you don't know, as learning negative things have a negative affect on the mind, you need to be careful of what you learn, but if you limit learning things to much then you might not find out the truth. So the end is figuring out a balance to try and get the canon ending.
AliceShadowRose
0

author=2013
game look good hope it come with a guide for good end and the Canon one too :P

No worries there will be a complete guide released with the game!
shayoko

Close
09/17/2014 12:02 AM
looks good sadly not my genre ill see if anyone that plays these types would be interested
oops...recommended it just now and didn't notice it wasn't released yet o noes!
Preaul

Yes this game is, however I'm currently looking to recruit a team so that I won't be making this entirely alone, also I've run into a bit of a hardware snag that has cost all the work that had previously been done on it, so sadly its had to be started from scratch. I do not have a set day for release because of this.
Preaul

Yes this game is, however I'm currently looking to recruit a team so that I won't be making this entirely alone, also I've run into a bit of a hardware snag that has cost all the work that had previously been done on it, so sadly its had to be started from scratch. I do not have a set day for release because of this.