As Charming as it is Frustrating

For a game created in just 48 hours, Gravedigger 20XX by orochii is incredibly charming. The graphics just ooze with retro Gameboy style, starring a cute player avatar, some fun enemy sprites, and dark yet stylish 8-bit tiles. The music, while a bit simple, evokes the feeling of exploring underground caverns while mimicking the beeps and boops of older hardware faithfully. When getting into the gameplay, however, the charm of the old-school aesthetic starts to fade as frustration settles in. 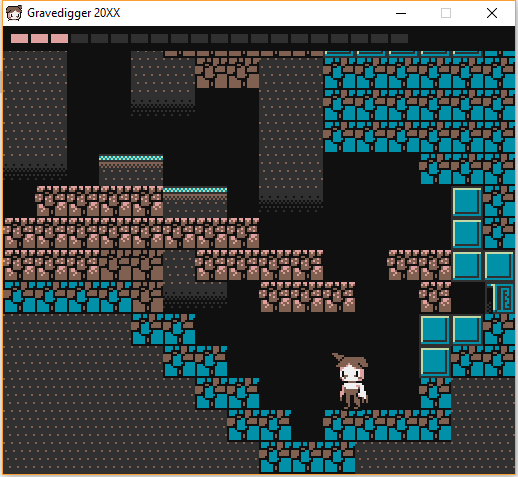 Who needs sunlight or human interaction when you’ve got MOLE-CLAWS!


The premise of the game is simple. You play as some poor schmuck who has been cursed by the spirit of an old king to be some kind of mole-man. Using your newfound ability to dig, you make your way below the king’s grave to see if you can break the curse. The simple plot works for this style of game, and gets the action going right away. As soon as the introduction is done and you start actually playing the game, however, the cracks caused by the short development time start to hamper the experience. 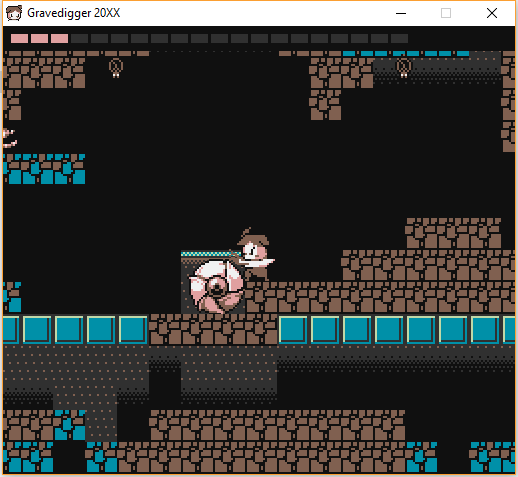 
The gameplay consists of running, jumping, and digging to make it through a short maze of connected levels while slashing with your claws to dispatch enemies and finding health pickups to stay alive. Sounds pretty fun, right? It should be, but the execution leaves enough to be desired that nothing ends up being as satisfying as it should be.

Movement in this game is slippery to an annoying degree. It’s almost impossible to make your character stop in just the position you want him to. It can also make some of the platforming more time-consuming than challenging. Successfully landing on a 1 tile wide platform only to slide off of it isn't very fun. Also, you might as well forget about just turning your character around without moving him several pixels. Besides all that, moving around the character feels fluid and responsive. The movement speed is also almost right, though I would actually prefer if he moved a bit slower to complement the smaller level designs. Jumping is fast and a bit floaty, as it should be. I just wish the jump was a bit higher as that would have made getting around a bit less frustrating in some cases. 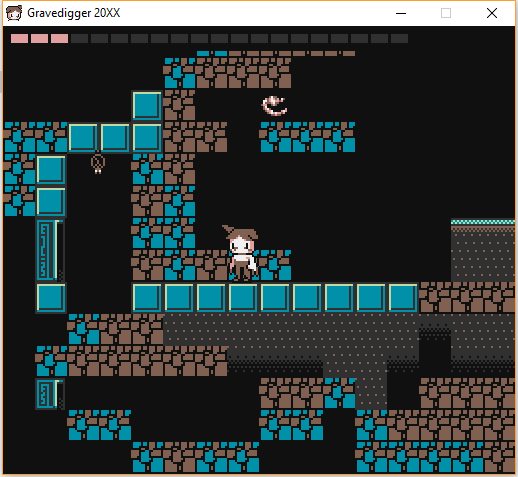 Picking up this simple healing item is a lot more difficult than it probably should be.


Digging is this game’s namesake mechanic. While it is innately fun to just dig all around the map, there are a lot of issues with the implementation that make it hard to fully enjoy. First of all, it’s hard to tell where to dig to destroy the blocks you want. There’s no visual feedback telling you if the blocks you’re swiping at are being damaged. The sound effect that plays while swiping with your claws does change when hitting a destroyable block, but it’s subtle enough to not even notice. When destroyed, the blocks just disappear with no sound effects or animation. I understand this is almost certainly due to time constraints, but it’s a bit disappointing nonetheless.

Secondly, digging sideways and upwards is very slow and cumbersome. If you want to dig downward, it’s very intuitive to just crouch and dig, and works very quickly. Digging horizontally works well enough, but takes significantly longer to do than digging downwards for seemingly no reason. Digging upwards is even worse. There is no way to actually point your claws upward and and dig, so the only way to do it is by jumping and clawing in place like an idiot until the blocks above you are randomly destroyed. It would be one thing if the level design circumvented this somehow, but I found myself in a few situations where the place I wanted to explore was sitting above a few dirt blocks, forcing me to slog my way up there. For example, during my first attempt through the game, I wanted to go back to the starting area to see if I missed an exit, but ended up giving up and starting the game over to get up there instead.

Finally, there’s just not much point to digging besides making it through the levels. At one point in the game, I found a bunch of dirt sitting in a corner. Intrigued, I spent a bit of time just digging all of it up and found...nothing. I can see why this wasn’t a priority, but if there were more things to find while digging, even just health pickups, that would encourage digging as an exploration tool and not just as a means to the end. For all these reasons, I don’t think the digging mechanic quite does the name Gravedigger 20XX justice, which is a bit of a shame. 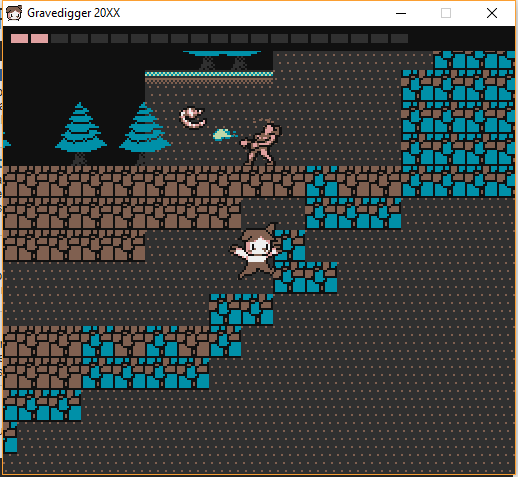 Yeah, I’m not getting back up there…


If movement and digging are flawed but still fun and functional enough, then combat is where the game kinda falls apart. In addition to digging, swiping your claws is also how you attack enemies. The problems with digging become so much worse when applied to combat, as the attacks feel imprecise and the enemies soak up hits like a sponge. The worst example is probably with the bat enemies, who are so small and move so quickly that trying to take them out is basically impossible without taking several hits. In fact, the only enemies that are reasonable are the zombie(?) and snake enemies you encounter at the very start since they just move in a straight line. The boss is a nightmare, being just too hard to kill with your pathetic attacks and while also worrying about the other enemies that occupy the arena. To rub salt in the wound, you respawn without full health at the boss room when you die and can't go back. All of this just demotivated me from completing the game, unfortunately. 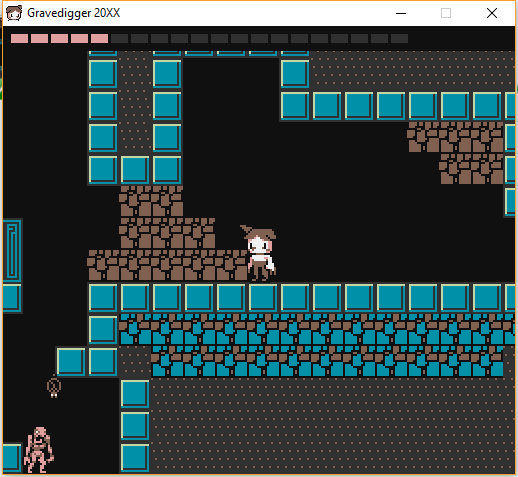 Once you get to this screen, GOOD LUCK


Overall, I still had some amount of fun with Gravedigger 20XX and would recommend giving it a try if you love the aesthetic and don’t mind a little frustration. It’s also not much of a time investment. The developer has talked about continuing development of the game past its 48 hour contest form and into a full game, and I sincerely hope they do! I can see this concept working out very well with beefed up, more polished mechanics and a larger world to explore. But as it is, I think I’ll give this game a rating of 1.5 out of 5 and hope that one day Mr. Moleman will have the game he--as well as the charming retro aesthetic--deserves.

(Now I'll be closer to be the master of makscor >:D)

Certainly there is a lot of design flaws in that game, this was maybe my second platformer so I hadn't even ironed out the basic movement. The water for example is horribol :'D. And the boss was something I wanted to give a little twist, so even if it's technically possible to kill just by punching, I wanted to make it easier to use your digging skills for some kind of alternative beating.
Show
You have to destroy all the ground and send him through the hole below him. That's why there is monsters under him and not with him. TIP: Destroy the bottomest layers of ground first, then the top one.

Thanks for the review again! :^D
Pages: 1