Am I disabled?
This is what I am thinking as I try that combat one other time...

But let's start from the beginning:

Acaso - Iris starts like a nice little game about a mystery: our protagonist wakes up incorporeal and with no memory of his past. Then you will have to explore, solve some puzzle and fight. Oh yes.

Graphically the game uses pleasing pastel colors and nice custom charsets and facesets, not the usual rips. The mysterious snowy setting is also a different and original setting, nothing particularly complex, but maps are ok and well done.
It's a pleasing and relaxing game... in the beginning!

Music is ok, I liked that during combats especially, but there's not much to say anyway about this.

Unfortunately soon some flaws will be manifested: for example the translation couls have been better. For example phrase "looks like I can't move anything" isn't really understandable. I would have used some alternative, like:

And so on... it's a pity because this could have been easily fixed. I'd also preferred longer dialogues, because most of them are really short and simple. Non a bad thing but, as I did a lot of translation myself, I'd have preferred more complex dialogues. And more of them too. 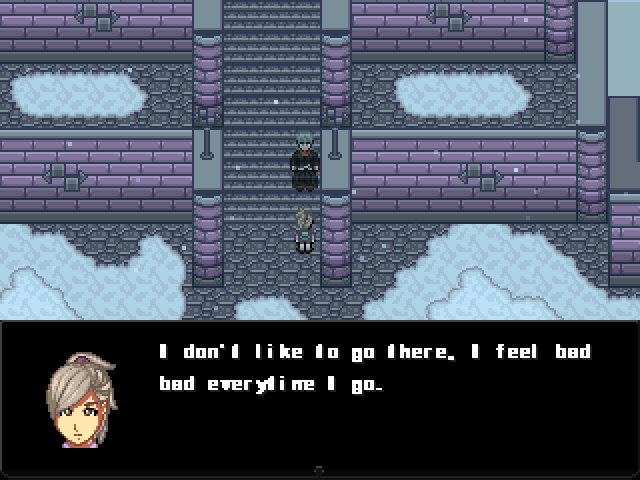 Then let's talk about the gameplay: the game is a mix of exploration, puzzles and quicktime events.

Exploration is ok, there is no indication of the place you have to visit and the correct order, but the maps are not so big so sooner or later you will understand. Nice thing is the "survival feature", as one character has to eat/drink as the time passes. It's an interesting addition, I liked that, as I liked the backpack/inventory menu. Oh, and you can also save anywhere, usingthe diary in the backpack. This is good!

Puzzles are very good: not too hard and not to easy, I spent some time but I was able to solve them, and well it's satisfying. I think the difficulty is balanced here. This is good too!

But I said also quick time events, correct? Well, to tell the truth the first and the second were not that bad, then BAM! The impossible combat, that I think it's also the final boss fight. I guess because I tried it one thousand time but it was no used.
So you know the sense on the question "Am I disabled?"
Technically it's not hard, just press the correct key at the right time, but well... during the last part you have to be too fast, and also never do ONE single mistake or it's game over. Ok, no mistakes, but you are slow? Then Game Over sir!

Too hard for me, sorry, I had fun with most of the game but that part is too much.
I'm sorry there are no other reviews because I'd really like to know if this is just my problem or it's really impossible to finish.

Well, if you try, good luck then!

The Verdict
This little game has some neat ideas, some simple but clever puzzles and nice graphics, but the translation and especially the unforgiving combat encounters are a big big problem for me. The rest, I mean music, mapping and so on, is ok, but nothing special. So for me it's 2.5, better luck next time!