Shippu la Senpu is your typical vertical shooter in terms of difficulty. Akin to the renowned Touhou series, or Ikaruga, or whatever, this game offers the player a tremendously challenging experience. What's different about it is the way that challenge is presented: unlike in many other shooters, your goal in Shippu la Senpu is not as much about avoiding bullets as it is about taking out enemies. Most of the time you won't be able to dodge bullets anyway, given that not only you but the ship you're protecting can also take damage, and it has its own health bar.

The enemy variety is not too broad. There are 4 types of them, I think? Not counting bosses, naturally. The weakest type, the little robots that come in little flocks, don't shoot bullets at all and mainly threaten you by gliding across the screen and looking to bump into you. A slightly larger type takes a little longer to destroy and shoots three bullets at a time before moving diagonally a few steps back. The harp-shaped enemies are probably the most annoying ones, screaming all sorts of slow. They just stay in one place, shooting bullets with large intervals in-between. Those bullets move painfully slow, increasing the chance of you accidentally running into them while trying to avoid other enemies' bullets, and once you get hit, you're slowed down yourself, along with your ship. In this game, that means losing a lot of HP. The largest type of enemies is the strongest one, and shoots big glowing fireballs that come straight at you at quite a high speed. This guy is fairly easy to deal with without getting yourself damaged, unless they come in two or more, all at the same time. And that, I tell you, happens way too often. It's especially annoying when you have the harp bot on the same screen.

But that's only the first 2-3 minutes or so. What comes next is a boss fight. Oh no. The thing about bosses in this game, they don't fight alone. That is, other enemies don't disappear when you reach a boss. This is when a couple dynamites really come in handy - but what if you don't have them? Well, you're screwed. This is where one of my problems with the game lies. The items that you need will sometimes not appear at all, so your success will depend a lot on pure luck. 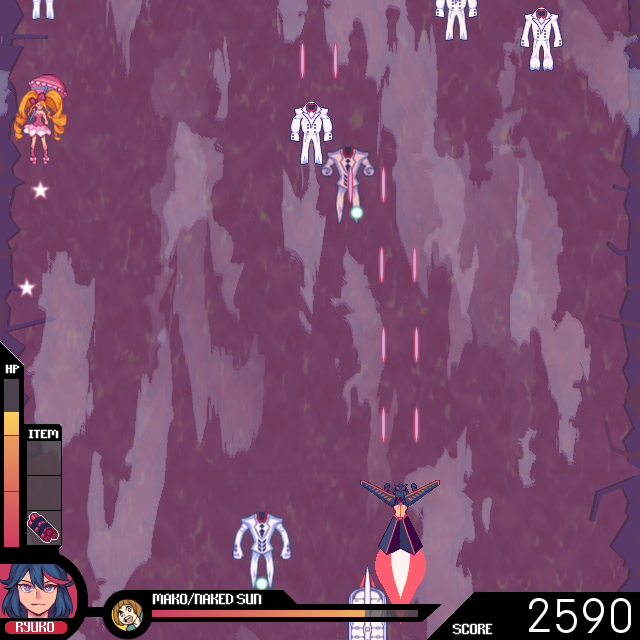 Aside from dynamites, the item list includes a golden star, a silver star and a bottle of potion. With the starter character, golden stars give you a wider shooting spread and silver ones make give your bullets more power. For the unlockable character (who is much, much stronger), golden stars put your attack in auto-aim mode and silver ones simply let you shoot with higher frequency. In both cases, the combination of these two items increase your attacking effectiveness by a spectacular margin. That fact makes the gameplay all the way more interesting, but then again, it's often that you just don't get the items you need. The potion is the most useless thing I found in the entire game: it restores a little HP to your ship. It's not necessarily pointless, but you do get random food drops from time to time, and they are usually more welcome than those red bottles that, apart from doing the exact same thing, take up a slot in your inventory thing - that's right, you only get 3 slots for items, and if they're all full, a new item will push the oldest one out of your pack. That means that if you have all the items you need, you'll have to avoid picking anything else up. This, I have to say, is quite annoying.

The are a few more elements that made my time pretty frustrating. The player's health can't be replenished, it regenerates on its own. The problem is, your health bar has two benchmark lines, and each time your HP goes below a line, it can't go over it again. If you lose too much during the first boss fight, you basically don't stand a chance against the second. Another subject of my annoyance was the fact that enemies can get you from off-screen, and you can't. And another thing, you can't pause. These are minor faults, but they are frustrating.

Finally, I'd like to compliment the proper choice of control keys. Arrows for movement, spacebar for shooting and ASD for items - it's all very basic, but I can't deny how comfortable the controls are.

Three of the four developers are artists - that fact speaks for itself. With combined efforts, these people managed to give this game a stunning look while keeping the colors and fonts relevant to the original show. The menu interface is apparently very simple in contrast to its surroundings, yet very fitting at the same time. The art style is quite distinct, but everything is still very much recognizable. The pixel art was done superbly - everything is well detailed, and the animations look smooth. Though I have to admit, the explosions feel a bit out of place, as they are a tad too... realistic, I'd say. 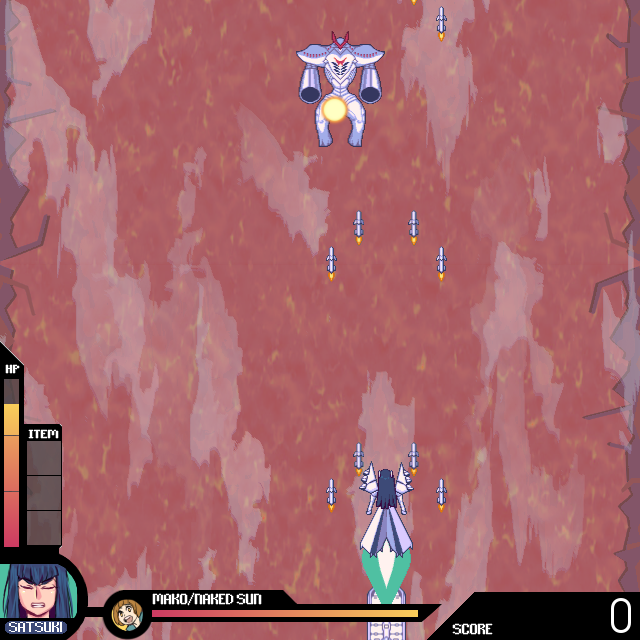 And one more thing: I wish bullets didn't appear out of thin air.
But that's all trivia

All the background music is taken from the TV show's soundtrack (correct me if I'm wrong). I can only give props for picking out the right pieces and leaving out the inappropriate ones. The sound effects are all custom and suit the game well. The good thing about Shippu la Senpu that makes it different from other shmups is that its sound effects don't interfere with the BGM and feel very natural. Eat your heart out, Touhou.

Shippu la Senpu is not everybody's game. Many people will find it too tedious to make their way through the bosses, and others, like me, will feel that the game lacks that certain something that'd give it lasting appeal. For me, that something is game modes. I'd like some customization, maybe? In terms of gameplay at least. Perhaps having more levels of difficulty would help, as the game is too hard at the beginning and too easy after unlocking the second playable character. Sure, you can compete with your friends and possibly aim to beat one of the creator's high score of 80k+, but I'll be honest, it does get boring after a few days. 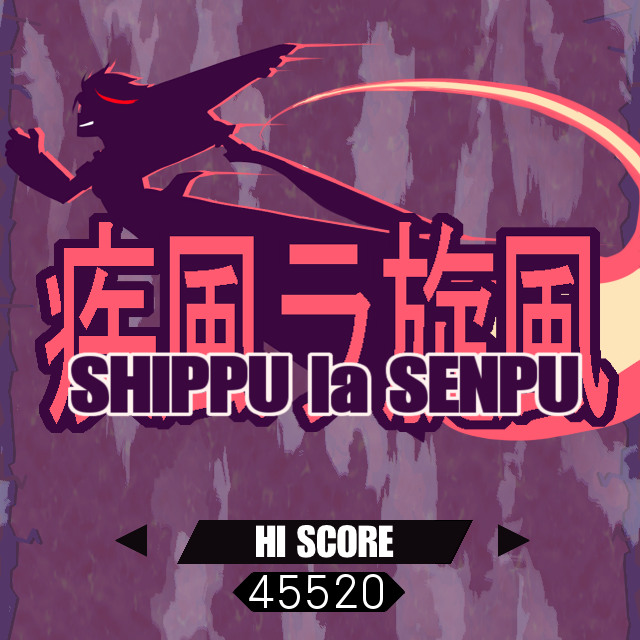 All in all, I did find the game very enjoyable though. For those who loved Kill la Kill especially, this game is a true gem. Of course, it has its own gameplay flaws, just like any other action-oriented game, and it's not very polished (due to time constraint I guess), but what it is at the moment is enough. Fan games are a generally rare occurrence, never mind good fan games, and what Shippu la Senpu does is, it provides the indie game scene with its breathtaking magic of quality and effort.

Final score: 4.5/5
Too good for a non-commercial game.

Close
08/14/2014 02:34 PM
Thank you for taking the time to play and to even write a review for it. I'm not sure if the game even deserves the 4.5 stars rating since, yes, we're aware that it has a lot of growth potentials and yet is lacking a lot. We've decided against expanding it because we ... kinda have more important stuff to do. Though, it was really fun working on this game while it last, and we're really happy that you and some others had some fun with it as well despite the lack of a lot of stuff.

Again, thank you very much. It really means a lot to us :P
Chivi-chivik