Hooray! Remnants of Isolation is now available on Steam at 20% off for the first week!

Hey, everyone! The Steam page is set up!

You know what that means? That's right, the release date is right around the corner! Keep your calenders open, because the game will be released on May 1st with a 20% discount for the first week.

Thanks for sticking with us. I can't tell you how much we appreciate it!

If you've been looking at the statistics threads these last few months, you may have noticed RoI at or near the top of the Games that Generate Discussion Last Month category. Despite the many conspiracy theories that have surely surfaced at such a perplexing phenomenon, we are not part of some shadowy effort to keep the game's buzz as high as possible. Just Sooz.

No. Instead, we have been talking each other's ears off in making sure that the game gets as much polish as possible before release. In order to stay coordinated, we've had to talk about every minute detail that could stand a little extra spit and shine. I know what you're probably thinking, "But Nova! Can't you let US in on some of this stuff every now and then? Quit keeping us in the dark!"

Well, that's the purpose of this blog, yes? The changes, additions, and polishing have been coming along very well, and we're now ready to bring them to light! So without further ado... 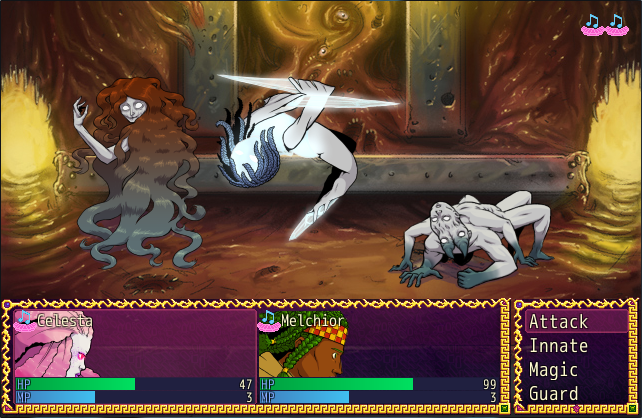 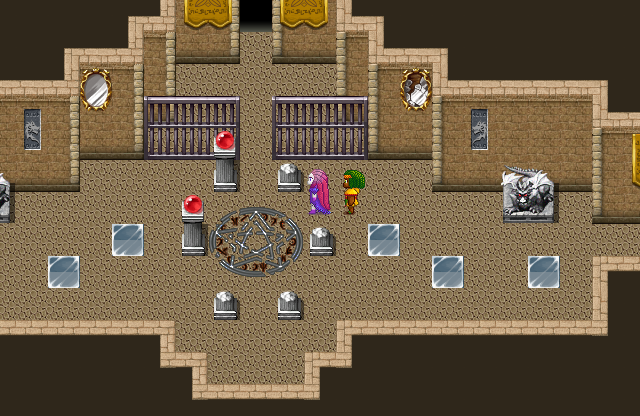 Also, Sooz is going the extra mile by making CGs as well! 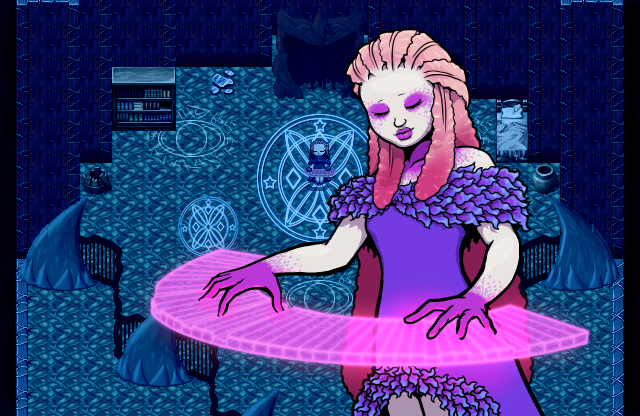 There will be new pieces of music composed by Quigon to replace some of the older battle themes. We are really happy with how they're coming out.

We've added some more backstory that gives a better insight into the castle as well as its inhabitants. Some of it is told via collectible notes, but sharp-eyed players will pick up on the more subtle changes to areas here and there.

That about wraps it up. We're pretty excited about this, and can't wait until release day! Oh, that's right! The release day! When's that going to be? Well, while we don't have a hard date set, we're shooting for an early May release. As soon as we have some more hard facts, we'll make sure to let you know.


Okay, NOW that wraps it up. Thanks for reading!

It's never too late for a bug fix, right?

You may recall a very frustrating instance where pressing right too many times during battle will cause the party's turn to immediately end, right? Well you'll be happy to know that, as of now, that bug has been cleansed! It feels good to finally put that issue to rest.

The game is now updated with this fix, so for those that are interested, go ahead and give it a shot! Just so it's clear: only the Deluxe version has this fix. We won't be making any sort of changes to the contest version as it's purpose is to show what we did in that one month.

First of all, we want to thank all of you who played Remnants of Isolation. It really means a lot to us!

We've been working with Degica, a digital distribution group, for the past couple of months to decide on a course of action for the game. We've finally laid out a rough plan for the future, and we wanted to share the highlights with you. Let's get the big one out of the way first:


Remnants of Isolation is going commercial!

Yep. The game is going to go on sale. We're in the process of polishing things up to make it extra-nice for the internet shelves, including:


Custom assets! No RTP for the commercial version.

We have been given 20 hours of free commission work, and we intend to use every minute of it! Tilesets, music, etc. will be made, so the game will have a much more unique look and feel than before. You will also be happy to hear that Sooz will draw new monster battlers for every enemy!

So what does this mean for the versions available for download now? Well, not to worry:


The contest build and Deluxe version will both be available for download even after the game goes on sale!


This was something we were nervous about the most. I was really wanting to keep at least the contest build up to show the result of one month of hard, hard work that we went through. Thankfully, Degica says that the current versions available will be great promotion for the commercial version, so they practically encouraged us to keep them up!


This pretty much covers the big points we had to talk about. Everything else is backstage, business stuff that isn't really important to you. I also want to mention that, right now, there are no hard dates set. We're still sorting out quite a lot of details behind the scenes, so we just have a rough outlines planned out. But when we do have something set in stone, we'll be sure to let you know.

We all want to extend a huge thanks for playing this game. It's great to see that both the contest and deluxe versions are getting their share of love.

Anyway, I hope you enjoyed it. Thanks for reading, thanks for playing, and thanks for all the support you've given us ever since this page was created. You are amazing!

We are very proud to present Remnants of Isolation Deluxe! We've been working almost nonstop for the past month and a half to polish this new version for you all.

This is more than just a patched version. We wanted to make a full-blown expansion to this game in response to your feedback and new ideas. This version contains a lot of additions that will make the game feel both familiar and new.


Here are the major changes:

- The dungeon that was cut from the original version has been added back in!
- A new Innate Spell for both characters!
- New enemies!
- New status effects!
- Some extra scenes, notes, etc.
- Rebalanced difficulty.
- Various bugs and glitches fixed.


With respect for the contest, we are leaving the Contest Build available for download. For anyone that wishes to play it, it will be under the Downloads tab on the gamepage.

Huge thanks to all the subscribers and everyone who downloads this game. You are awesome!

Wow! We've hit 200! Thank you to everyone for trying RoI out! I hope you enjoyed it! :DDD 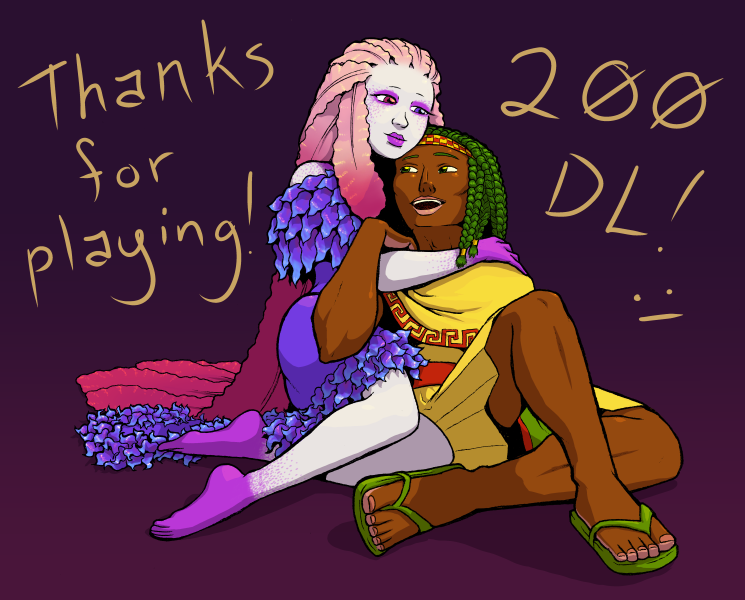 Remnants of Isolation is Here!

On behalf of Red Nova, Sooz, and myself, I'm very proud to present the Contest Build of Remnants of Isolation, available for download now! We had planned to release this yesterday, but we took an extra day to add some more polish to the game!

Please give it a try and let us know what you think! This is the build for the 2014 Indie Game Development Contest. As Red Nova mentioned in the last blog, we had to cut a few things (like an entire dungeon XD) from this version to meet the contest requirements, so be on the lookout for a Deluxe version, which we'll put together after the contest is over.

A huge thanks to all of our subscribers and to everyone who gives the game a play!

PS: I apologize ahead of time for the 100 meg filesize. The contest requires all materials to be packaged with the game, so that's why that ended up like that ^_^;

Zeroing in on a release!

To say I'm excited about this would be a bit of an understatement. But it's true! We're about 90% done with this game! All we have to do now is create the last boss, get a few pieces of art and music, and we're ready for a release! Since the game is only about an hour long, I don't really want to go too in-depth about the actual content for fear of spoiling. After all, you're all about to find out for yourselves, because we've got a tentative release day planned!

Yep, we're thinking this game will be ready for a Contest Build release on June 28th. Four days from now!

Wait, "Contest Build"? What do I mean by that? Well, you see, we were so excited about this project and we put so much effort into it that we actually went a little overboard! The amount of time it took us, people who knew exactly where to go and what to do, to run through the entire game was about an hour and fifteen minutes. Since the contest says the game shouldn't be longer than an hour, we needed to make some cuts. And so, unfortunately, we had to remove one of the dungeons and simplify the others. Trust me, we tried so hard to keep that from happening. But we simply had too many ideas, and not enough time.

Oh well. It's a good problem to have. I'd rather have lots of content and make cuts than not being inspired enough and just have a hollow husk of a game with forced content just to lengthen playtime.

The good news, though, is that we're not about to just let our heads droop and cry about the loss of the dungeon. After the contest is over, we plan on opening up this project again, add in all the content we had to cut, and release a new version. We put a lot of effort into this, you see, and we're not going to let it go to waste. We'll still keep the Contest Build up out of respect for the contest. We will just have a new download for the game with all the cut content added back in.


Anyways, that's all I've got for you guys. We have all had our noses to the grindstone this past month, and we cannot wait to show you what we've got!
Pages: 1