Okay, let's just pretend like I didn't put my foot in my mouth there :3

Remnants of Isolation is an rpg made for the IGMC 2014, in a collaboration between Unity, Red Nova, and Sooz. This review is written for the current post-contest version of the game. The game is a traditional rpg, with a series of quirky twists. You play as a girl who cannot (or refuses to) speak, and who was locked behind bars in a magical castle for her entire life. Suddenly her cage's doors broke, and she was free. Soon enough, she meets Melchior; a (rather chatty) fellow who seemed to be exiled to the castle. They eventually grew closer to each other, as they explored the strange castle; looking for the way out. Will they succeed in their escape? 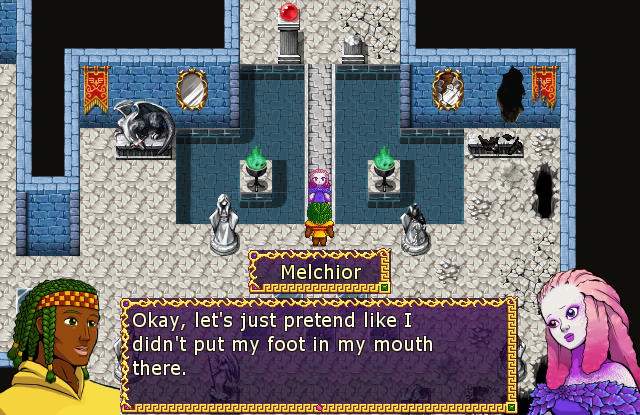 The story is well-written. Despite having only one character doing all the talking, conversations still happened. The story moves forward constantly, and has many sides to it: Sometimes it's serious, sometimes light, and sometimes forlorn. And yet, it doesn't feel like a mish-mash of tacked-on events. Everything is fluid and polished. Great job!

Art and Music: 5/5
Although a large portion of the art used was from the rtp, these were used expertly and even modified to the point where you would no longer notice that it is rtp graphics. The ones that were custom made though, were professional-grade art. Any other description would be a complete understatement.

The music supplemented the game's story and art rather well. It helps establish the mood for the current scene, and it does so with complete ease. 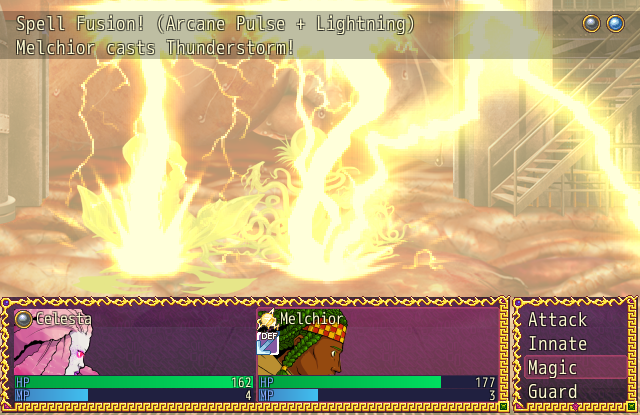 The battle system isn't perfect, I'll have to say that. Although there were no balancing issues that I've encountered, the battles still boil down to 'set up for strongest attack' followed by 'spam strongest attack'.

Nonetheless, it is still quite innovative. This might be the first rpg I played that gave further importance to turn order and my previous actions, as they might make or break the fight at hand. You are given two types of skills: innate and magic. Innate skills have various effects that can either damage/debuff a foe or heal/buff an ally. In addition to that, Innate skills also modify the magic skill used right after it is cast. Magic skills are your main damage sources, and are learned by equipping various cards for each skill. The system goes like this: you activate an innate skill using one character, and then follow up with a magic skill using the other character. This results to 'skill fusions' that have various effects that can easily tip the scales of the battle to your favor --if used correctly.

So to summarize: The battle system is simple, and has lots of potential; though I feel that it was not fully showcased in the game.


Outside of battles, the game sports some quite challenging puzzles. They also were not added in just for the sake of having a puzzle. They served a purpose; and they served it well. Being neither too easy nor impossible to solve, the puzzles were one of the many things that I really liked in this game.

Random Thoughts:
Show
*The maps are... too big and cluttered. But that's just my opinion, and it's coming from someone who can't make maps larger than 30x30. Take it with a grain of salt ;P
*Now that I've thought of it, how come Celesta trusted Melchior that fast? I mean, I assume she was born in the castle and thus, had never seen another human before...
*The Prison of Flesh gave me the creeps... >.<


Overall: 5/5
Playing this game has been nothing but enjoyable for me. And even after the game spurted the ending lines and returned me to the title screen, my mind's still hanging on to the pair. I guess you may call this a 'game hangover'. For this, there is not much argument. This score is what this game deserves. 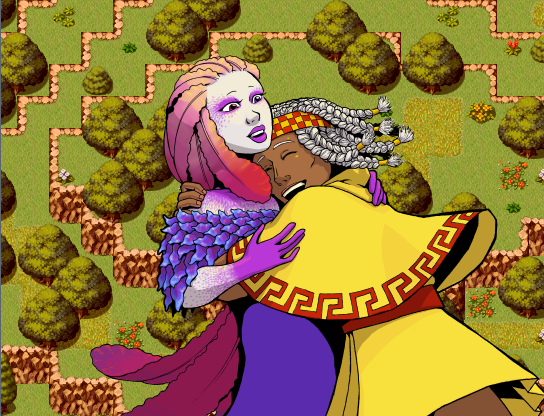 Play! The Sentinel won't be too happy if you don't!