Following the decisive battle of Wild Wings: First Flight, Shade and his party finally arrive at Hibernaculum, the Silverwing colony's designated winter roost. Taking a much-needed break, Shade knows he cannot rest for long, for he feels that his missing father is still out there, and very much alive.

Halfway through hibernation, Shade takes it upon himself to go on another journey to find his father. His allies are not far behind, and he takes comfort in their presence.

During Shade's longing search, he encounters obstacles and trials bigger than he could ever imagine. Goth clings on to life and is conducting more schemes to acquire the Silverwing colony's precious Tetsu Ring, an heirloom that contains the power of a Goddess. As if Goth wasn't bad enough, the Owl and southern Canin civilizations are creating an alliance to destroy Shade for his attack on the Xenos.

Shade's simple journey to find his father has just become a whole lot more complex. He will need to gather all of his strength and courage to best all the hurdles that he comes across as he continues his search; however, Goth is back with even more deadly powers at hand, aided by his demon god, Cama Zotz. Will Shade be able to put an end to his madness once again? Just how much power does the Tetsu Ring really possess?

In Wild Wings 2, you will get to see familiar faces, familiar places, and a whole new look on the adventures of Shade Silverwing. Prepare to witness the true power of both sides.

Wild Wings 2 is the direct sequel to Wild Wings: First Flight. It started in 2007 and encountered development hell since then; but now it's back, and will be under better and more consistent development!

This game is a pure product of love inspired from the brilliance of Kenneth Oppel's bat books. A large chunk of the content in this game was made by me. The bats have a stylistic, anthropomorphized look in order to remain consistent to the previous game.

As opposed to the first game, Wild Wings 2 features a bit of a darker and more mature side and will be released in episodes.

Part 1: Out of Hibernation 100% Complete

Modify battle charsets to include wings!

Change message boxes to optimize as much space as possible and highlight names!

And if you haven't already, please try out the first game in the series. It isn't completely necessary to enjoy Wild Wings 2, but the game does reference things from the previous game, so it's best to familiarize yourself.

Wild Wings 2 is back with Version 4!

Everyone, I am pleased to announce that I have successfully brought Parts 1 and 2 up to date with some new features! 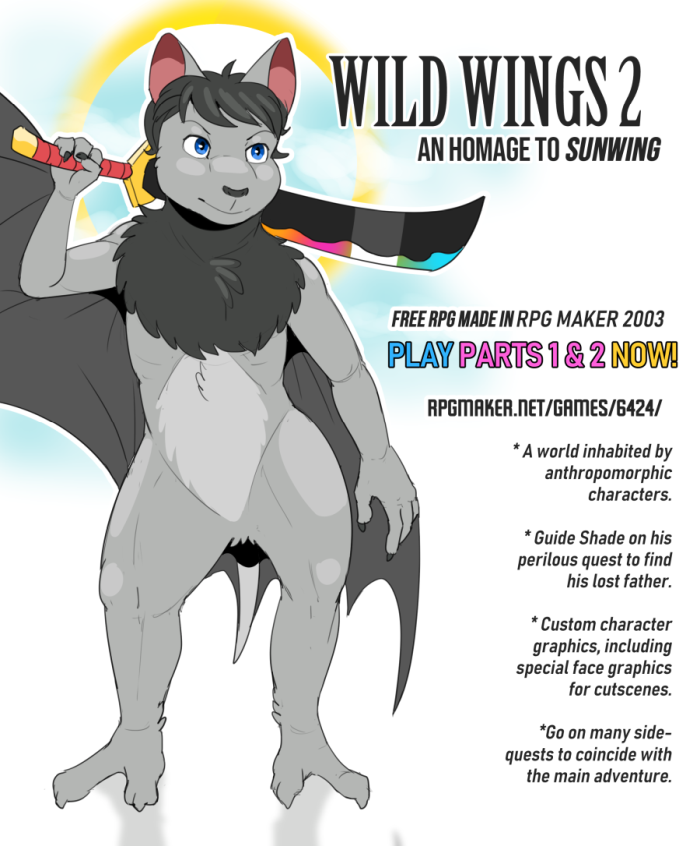 Here are some of the things added to this latest version of the game:

These are the biggest changes, but some more minute aspects have changed as well to deliver an overall better experience. With this update, I hope to make Wild Wings 2 as good of an experience as it can be in its current state.

That being said, I have a favor to ask you all. If you could please provide feedback on the first two parts thus far, I would greatly appreciate it. I've put many years and much effort into this project, and your feedback would not only help me improve the game, but also give me the encouragement I need to carry on with the project. Please share this game with other RPG Maker fans that you know, and let's help Shade finish his quest in Part 3!

If there's anyone concerned about whether or not they should play this in its unfinished state, don't be wary! The game can easily be updated to continue the story where you last saved at the end of this demo.

Thank you all very much for reading, and I hope you enjoy the game! Please let me know if you find any bugs, I'll be listening!
Feed your slime pet!

author=Corfaisus
I can't find Shade's mother at the beginning of the game. I've been all over the forest, but to no avail.

Head to the 4-way junction. If you Fly, you'll see stars near the pond.
amerk

Close
04/12/2015 03:52 AM
A shame you haven't received more comments. I just finished the first game and will be doing a review hopefully in the next few days. Hopefully this post will show you that there are people who do want you to continue and finish the sequel.
Fidchell

author=amerk
A shame you haven't received more comments. I just finished the first game and will be doing a review hopefully in the next few days. Hopefully this post will show you that there are people who do want you to continue and finish the sequel.

That is very kind of you to say, thank you! Don't worry, I'm still working regularly on the game, just have a lot of things on my plate, and this game itself is pretty large.
Gibmaker

author=Pancaek
This game is three years old and only has seven downloads?

The download was recently uploaded. I took down previous ones, so that's why there's only 7.
Pages: 1