One More Year tells the story of Sol, an average 14 year old petulant layabout, content to sit around the house doing next to nothing unless threatened with unspecified punishments by his mother, living at least a part of his life in his richly imagined daydream world but in reality happy to play video games when he isn't at school and let the outside world pass him by. 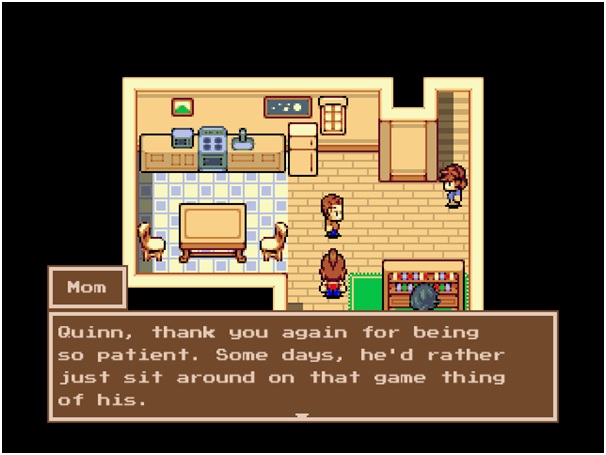 Could you be a little more specific? Gameboy, X-box, PSP, PC?

That is until his 15th birthday when a group of his friends decides that he's basically a waste of space and if he is ever going to make anything of himself they are going to have to push him into doing it. Peer group pressure being what it is Sol soon caves to his rival Sesy's suggestion and decides to venture into the conveniently located spooky mansion that is just down the street from where he lives. I mean he's making a change in his life but there is no need to go overboard. Trekking across some uncharted wildness to a scary abandoned mansion would be a step too far, walking down the block on the other hand is just about right.

So with his trusty companions in tow Sol sets out to fight ennui by breaking into his neighbour's house and rummaging through his stuff. Of such things are heroes made. Of course before that he does have to scope out the neighbourhood for any hidden loot and a run in with the scary maintenance worker and his fascination with mutant hummingbirds. Because don't we all live in fear of the inevitable mutant hummingbird uprising? 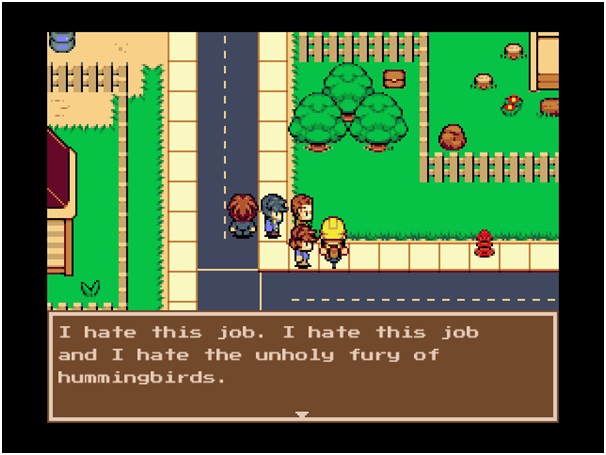 Back away from the jack hammer.

Before you can get into the mansion you have to go up against one of Sesy's other friends who decides to give you an education by way of fighting you. Hey teenagers, who knows? This brings us to the battle screen. Battles are your classic turn based, but the developer has included a couple of little tricks to the arsenal, one aesthetic and the other mechanical. The mechanical is the application of AP points in order to access burst capabilities. Unlike other TP type gains, you simply gain 1 AP per round, not dependant on taking or inflicting damage on the enemy. You have a maximum of 5 AP so you need to decide whether to spend it on low level AP attacks or run the risk that you will survive for the five rounds it takes to earn enough for the higher level AP abilities that deliver a devastating blow to the enemy.

The aesthetic one is fairly cute, as each one of your combatants are given their orders their faces drop down behind the menu and you move on to the next, then when they are in their action phase they pop back up to complete their action before dropping down again to allow the next to take the spotlight. 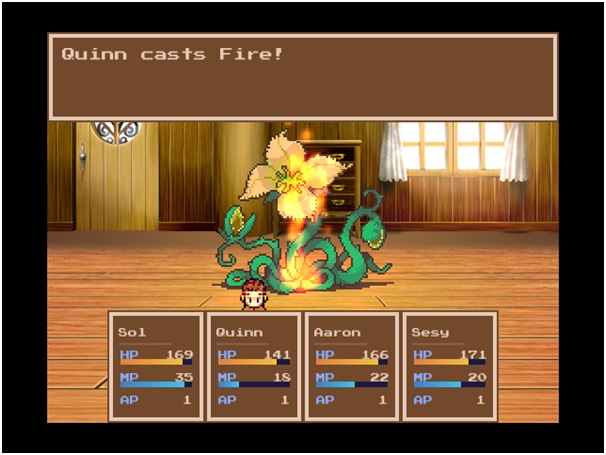 Kill it Quinn, kill it with fire!

The battles do have an odd downside though, they award both experience and gold as expected, but since there is nowhere in the game to spend the money it seems a bit of a waste to include it, given the currently available game it would have been more helpful to simply drop more monster loot rather than money. Though if the developer ever does return to finish the game I'm sure that oversight will be corrected and there will be opportunities to spend your hard fought for rewards.

The trip through the mansion is a mostly guided one since almost all doors except the ones you are meant to enter are locked and you have a handy spectre giving you visual clues whenever you step off the beaten track. You don't get much more than a glimpse of the possible storyline due to the brevity of the game as it stands, and given the fact the developer hasn't made an update or comment post in the better part of a year I don't know if there will ever be a chance of getting any more than that. You can't tell from the little you get how the story was going to play out, but the seeds were definitely planted for something interesting, it's just a shame the developer never stayed around long enough to let them grow.

If you feel like spending 15 minutes or so wandering around an old school modern tile set and watching the beginnings of a coming of age story, then take the time to download and play. But really there is very little to see here and you don't finish the game with any feeling of accomplishment, or much of a desire to roust the developer from his den to find out what happens next.

author=nhubi
Could you be a little more specific? Gameboy, X-box, PSP, PC?

Yes, because if there's one thing mothers are known for, it's taking the utmost of care to specify the exact type of game console their kid uses.
Pages: 1