The bar is a listed as a short visual novel, but it's more of a one room play, however since that category isn't actually available on RMN, visual novel will have to do. In the comments on the game page I said the description reminded me a little of waiting for Godot, Samuel Beckett's absurdist play that has spawned a thousand opinions, and quite a number of arguments. This game is no waiting for Godot, but then it would be foolish to think it could be. What it is, is a moment in the protagonist's life when through actions not completely of their making they are forced to wait for someone, someone who may or may not be coming at all, someone who may not even exist and yet they wait and as they do, their mind does what almost all human minds do, it wanders and ponders and invents. 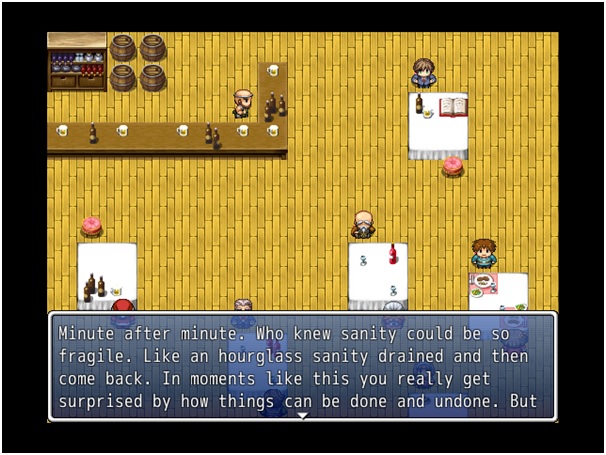 Waxing philosophical after a beer or two.

This is basically a study of boredom and loneliness and the often odd ways our minds tend to cope with it, in this case it's pretty much a single person stream of consciousness, which though an interesting concept is kind of odd to watch unfold. I know my own stream of consciousness conversations can be oddball to say the least but to be privy to what amounts to someone else's is a little disconcerting. Still I've got to give it points for originality, if not lucidity.

There is very little interaction on the part of the player other than hitting the enter key to continue the internal monologue of the protagonist, or to make a simple choice to either wait or leave the bar. 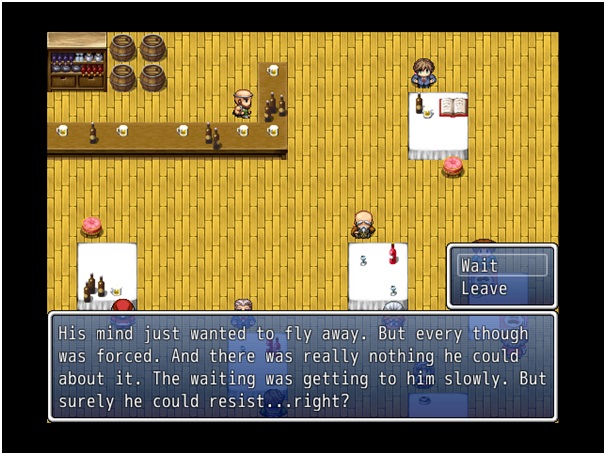 Then again as there is almost no interaction on the part of the protagonist with any of the other denizens of the bar, perhaps the lack of involvement is meant to serve as a mirror for the player.

For a visual novel, there are quite a lot of spelling and grammatical errors which do detract somewhat from the flow, and since this story is all about the leaps that a bored mind can make, flow from one idea or concept to another is important. Still it did not stop comprehension, just created a slightly jarring effect, which perhaps may have been intentional on the part of the developer, but I don't believe so. Or if it was it wasn't consistently portrayed.

The Bar is fairly short, if you wait every time you have a choice it lasts less than 10 minutes, but you can leave well before then, so it's not a huge outlay of time. It's just nothing actually happens, so if you feel like spending ten minutes as a spectator to the thought-play of a lonely somewhat obsessed character, then give it a go, otherwise I'd say let it pass.

Close
08/07/2014 05:50 PM
I have to say thank you about the review. I will try fix the grammar and spelling once I get the time. Also at first I wanted to make the player able to interact with other people but I kind of gave up on that idea. Again thank you for the review.
nhubi

author=nhubi
No problem, I did say I'd do one, just took me a little longer than I thought to get to it.

Well time is something we all need but it is given to us in such short spawns that we don't know when we lost the day :P
Pages: 1