Introduction:
Here are my thoughts on the game from a game designer's perspective. When I first played this game, I was pretty much satisfied on all sides. Great in some regards, but okay in others. I always go into writing my reviews with my prediction of a star rating only after I played it. I'll start this game out on a 3 to 4 star rating, before I begin discussing it. Most likely a 3.5, however, I might talk myself into either a lower or higher rating. Again, just my feelings before going on to analyze.

Let's start off by talking about the game's biggest draw and appeal: 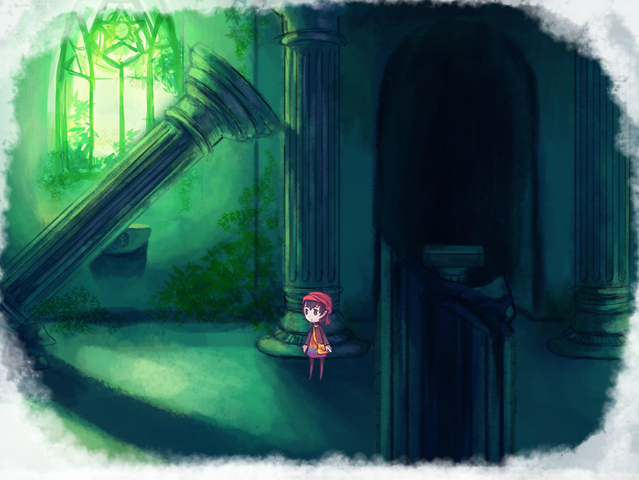 This might be my favorite scenery of the whole game. Not that it gets worse after the very beginning, but that it's green ;)

It's not my strength, so I won't even try to in-depthly critique the art, but it was definitely the defining part of the experience. The environments and UI all kept to the painted style. Each environment had a different color palette making it unique enough. As you can see from above, the first scene had a lot of my favorite color: green! I feel like this falls under art so I'll quickly mention that it was rather disappointing during the "painting" scenes. When you walked up to the statue, I was hoping after each flash the painting would slowly be painted. But it wasn't until the last flash before the entire thing was painted in. I suppose It would have been cooler to have some progression.

The art was great pretty much in every part of the game, however the final boss's final form wasn't as intriguing to me as the last two forms were. I didn't really like it's design. The rest of the monsters and characters were pretty neat, though. Finally, making it very "minimal" in the beginning was a very good decision in setting the atmosphere. Not only was there a change in scenery, but also in the player character. Agiel and Zophire were even better character designs. I loved those two designs the most out of all characters in the game.

As for the music in the game, it's pretty much on the same level as the art. A good use of vocals in my opinion, because they were never during a part where they could distract from the actual game. When I look at a game to play, I look more for music then for art. The art wasn't what made be want to play. What pushed me to play was the fact that there was a custom soundtrack(and battle system), and there were some really good tunes. Great use of sound and audio.

I'm going to start rating individual parts in my reviews for now, so I'd give this part of the game a: 5/5. 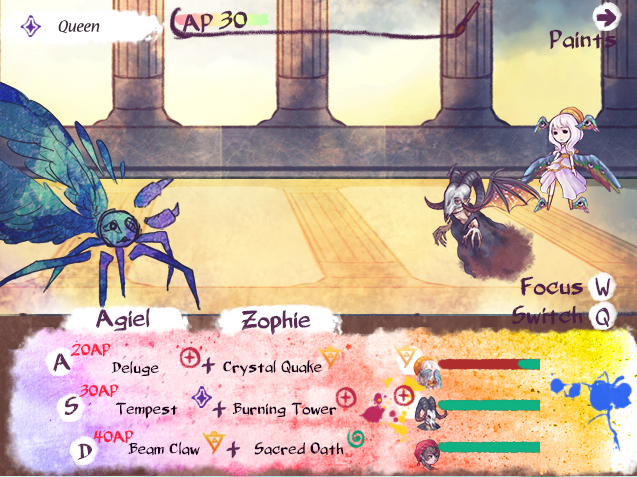 That UI keeps to the same, painted style. Awesome. Quite an interesting battle system too.

I've put together little battle systems with 100% eventing before, but never go to try making it visually appealing! It's a very professional, visually pleasing UI. While this system is 99% evented, it manages to be pretty technically sound. While I wasn't mashing any keys or anything, I did press a couple extra times or whatever. It was put together quite soundly. I had some picture troubles, however. I would press X on the map to bring up the menu, and the wooden background that usually drops down wouldn't come down every time. Usually because I pressed X too fast, I think.

Other then the menu, the problems that I had in the set-up during battles were damage pop-ups for Cor. They were WAY too far away from Cor. It was hard to tell at first what numbers pertained to him. When the final boss died, it went to the victory screen, and the numbers for how much Max HP you gained were out of place. Basically, there were some technical things that could use touching up. 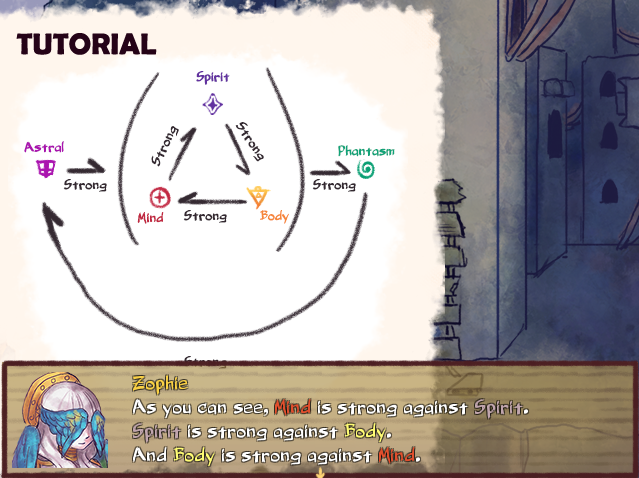 The equation here was great in making battles strategic.

The typical triangle formula you see in a lot of games has an interesting twist I'm not used to seeing: having an element completely weak against all but the one element that happens to be strong against everything else. A great idea, and it's execution is THE premise of the battle system. I kept the picture file provided in the folder open throughout the whole game to use as a reference. I did a lot of studying before each and every move. This was interesting, and I had to decide when was best to use what moves. AP ended up a tricky part of the gameplay, as I was exhausted quite a few times on accident. I might just have been not very good at this, hah, but it was a challenge.

First time playing, I didn't get more then one passive skill. I didn't even notice them. Second time around, however, I got all of them. They provided pretty good options, but the problem with the battle system is that there is a lack of options in the moves, with their elements fixed. Others have brought this up, but I think customization in moves would have been a great touch. It almost seems like it should have been there from the start because of the way the battle system is set up. Battles were still pretty difficult when I played advanced mode, and I had to think about the switching, the elements my characters would assume, and the moves that hit best. They went on for pretty long, however. Thankfully, they were all scripted event battles, not randomized.

Overall, the design of the system was pretty solid just... missing things. The 2d plane the player walks, the puzzles, the platforming. They were balanced until the end. Those switch puzzles were tough when introduced but in the final level, they were nothing in comparison. Even the events where Cor would jump on and visually take a ride were gone, replaced with instant transfers that somewhat disoriented me. The final level felt pretty rushed. I'd give the overall design a 3.5/5.

Writing
I played this game twice. Both times I got to the final boss, but I actually beat it once. During my second play-through I had more influence from what other people were saying about the writing. HOWEVER, I couldn't find a "flawed" feeling when playing this. At least not as strong of one, but still. The dialogue and scene-by-scene are well done in terms of writing as well as direction. The setting is set successfully. The roles of each character are well defined. I suppose what this was missing was a solid overall theme. While I did like the message at the end with: "The only thing stopping me is me", it felt rushed a bit. While it was a great development for Cor as a character, was it satisfactory for the whole world's message? There was more to the world this game took place in, and I feel a better message would say something about pictomancers and the lack of color in the real world. Why were they so bland? They seem to really worship these pictures. There is potential for a great twist there.

While one-dimensional characters are dangerous territory, the characters fit their roles well and dialogue was interesting enough to establish them. They were likable characters and did have some "redeeming" scenes, where they challenged their one side a bit. In a short game like this though, it ended up not very strong indeed. But, I still felt Agiel was very likable. It was a nice touch having the jester's riddle. Because it tested the player's knowledge on the characters surrounding them throughout the game. Obviously there's something to his character if I can look at him and think "yeah, the answer is definitely him.".

There are definitely some good points, all though a bit lacking. I'd give the writing a 3/5.
Conclusion
So, to end my review, the writing and design were pretty average. The design was getting pretty intriguing, but ended up a bit lacking. The strong points were the art and music. I definitely enjoyed what I saw, however it ended in an experience that was not as memorable as it could have been. This game is definitely above average from what I've seen with good ideas and such. However, some lacking execution and whatnot. I guess I'm sticking with my gut on this one:

author=accha
Thanks for the review, outcry! Especially for touching on the overall misses of the game-- it really helps guide us for the next time. =D

Of course, good luck with whatever you work on next, RPG or not ;).
Pages: 1