1 reviews
Decades ago there lived a girl with a terminal illness, but despite her awful luck she was (for the most part) a happy person, though secluded from the rest of the world. While this girl had accepted her fate, others around her had not. Specially her father, Sir Victor Saparneva. He became obsessed with the idea of making her live foverer in someway. And although the idea was but a ruse to this young girl, she played along. She would allow her father to paint a picture of her every week, and in exchange she would sing for him. It was all well, it was all good. Until this was not enough for Victor.

This episodic series of games explore this premise where you first play as Emily, a 19 year old, whose brave attitude keeps moving her onward into a series of mystic and dark events that unravel inside her family's mansion. In Act 1, you will help Emily in her path to find the truth and destroy the source of the dark magic and theurgy that has rised from within a visible parallel dimension.

Series of games also serve as a precursor to the game Mirror.

Full game available for download with RTP or no RTP.

I think we did pretty darn good for starting this game nine days late.
If you find any left over bugs, let us now! And you'll be credited!

If you enjoy it enough please support it by liking the game page in the 2014 Indie Game Maker Contest http://contest.rpgmakerweb.com/game/view/id/172 between July 1st and July 7th.

author=Liberty
"He would allow her father to paint a picture of her every week, and in exchange she would sing for him."
...She? ;p

ugh I thought I fixed that. Thanks.
nhubi

edit: do grammatical errors count? Because the opening sequence has a few.

It's should be father's steps, not father steps and I have my own strength, not I got my own strength. Also father in the sequence shouldn't be capitalised, as it's not being used as a noun to replace a name in direct conversation, as the sentence stands it sounds like you are talking about a religious person called Father Claire.

edit 2: Ok found an actual bug. In the sequence after the nightmare when you awake the next morning you have control of Emily, which means you can move her. If you move her down a step or two before the cut scene of her talking about not being bedridden kicks in she then moves on her own and ends up on the top of the wall between her bedroom and her dressing room and you are stuck, you can't transition back into the room to continue. 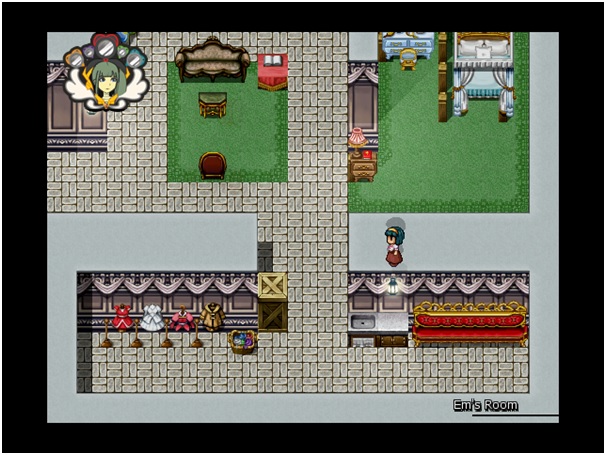 Also the dialogue attached to the untitled statue in the garden needs a self switch, if you look at that statue after the opening scene Claire's statement about Emily going inside plays again, even after Claire has disappeared.

Edit 3: In the room of the 4 keys puzzle, you can walk up the wall of the plants on the left hand side to the space between the walls, in addition the little forced movement section on the bridge also grabs you are you are walking back from the locked doors and pulls you up onto the bridge above.
hotarun Close
08/28/2014 04:18 AM
There is a glitch that when you go to the underground where you see the cloaked person run away and several bar doors block your way. You can climb up the ladder and walk through the wall and go around into the boss fight finale map. The story continues that way as you can do the finale but are unable to return since the doors are still closed. Close
08/07/2015 09:06 PM
Random thoughts
Show
i love the lighting and shadow effects! its awesome how the shadow actually moves a bit tho
i don't know how realistic that is

when you enter rooms the lighting effect is delayed a bit. that hurts the immersion

once you get into the east area of the manor. you really need to put a save point that's quick to find.

whats with the staff lobby??? i keep freezing. i cant move every couple of steps and theres a monster in there to make it worse

i was getting a lighting effect crash when the giant spider attacked me. then it just stopped

those doorways/windows are so misleading! should remove them.

General-Dropped 2 hours in (could not progress anymore)
Show
This game had potential to be something and i say had because it seems the developer went awol...
it has things that need to be improved and i could not finish the game unfortunately (reason below)
hopefully at some point he comes back and improves this...still its a good experience i would recommend.

Overall
has flaws but worth playing

Dropped where? why?
Show
Location of the 4 keys- i am missing the on which the clue is Time is just a prop to Art
i tried using the clue and just ignoring it and interacting with everything i can find. to no avail and i re checked everything at least 3 times. sadly i am out of ideas.

Lag?
Show
when your in the dream world there is a room with 4 mirrors and a gate up top.i am not sure if its the game programming or my pc is too weak?
but when i walk in the "river" the game slows down quite a bit
bicfarmer

Show
What happened in the end??? Was the dad evil or something? Looked like he was evil and had an evil artifact to live for, and didnt care about his daughter at all. What a mad father.
Pages: 1