A Game With Heart

The Heart Pumps Clay is a 2014 Indie Game Maker Contest entry by Housekeeping. It's about a witch and her two cohorts who attempt to climb the rather large Tree of Life and obtain the almighty Source of All Things that waits at the top.

The characters in this game are all a lot of fun, from the protagonists to the enemies you face. The main character is Mara, a witch with elemental magic, Bud, her loyal but silent Golem, and Crow, a thieving loud-talking crow. The enemies are a wide assortment of baddies, with the most memorable being the bosses, who all are a bit peculiar, to put it lightly.

The gameplay consists of making your way up the tree, fighting enemies and bosses, and looting treasure. Your characters gain no experience or levels after battles, and the golem Bud actually loses Max HP each battle (5 HP after normal fights and 10 after bosses). Enemies are static on the map, and while you have to fight many of them to progress, you can skip plenty of them. These, however, have treasure chests with useful loot, so you have to decide if making Bud weaker is worth getting the goodies.

This all makes for a very neat risk vs reward scenario that generally works well. While you don't gain levels, the treasures make Mara or Crow more useful. On the downside, not all treasures are of equal usefulness, and you'll have to gamble on if they're worth Bud's Max HP taking a hit. I always appreciate RPGs that play with the rules and do it well, so turning normal leveling on its head is very much appreciated, especially in how it shifts the characters roles in battle.

Bud is your tanking-style character, and starts out with significantly greater Max HP than the other two characters. He can also draw enemy attacks to himself, making him the perfect meat-shield... as long as his Max HP is high enough so he can take the hits. So Bud's Max HP really is a precious resource. 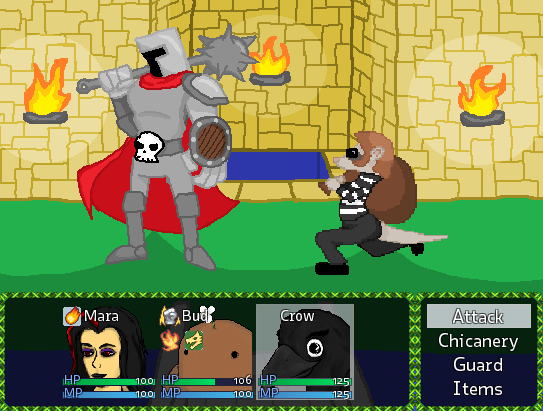 This brings us to the battles. Using a combination of elemental strengths and weaknesses and various other means, Housekeeping keeps the battles fresh and interesting. Mara can shift between Fire, Water, and Earth modes to cast magic of the corresponding element. When she does this, Bud will get a status effect that either makes his attack or defense higher, or, in the case of Earth, gives him a hit-all attack. Bud, as stated before, is your tank, and can draw fire to himself, deal physical damage, and revive. Crow is your fast thief-type who also has a couple of game-changing abilities that are very useful if used wisely (the ability to stun a foe at the cost of a lot of MP, and a move that restores MP).

Items are used very interestingly in this game. Mara can produce them and Crow can steal them from enemies, but all items are lost at the end of the battle. To make up for this, the items are super-useful, fully healing HP or MP or reviving with all HP, for the most common examples. This makes item management a per-battle affair and really makes you think about how you'll use them. It works perfectly for a game of this size and is a really cool feature.

Most of the challenge of the game comes from exploiting elemental affinity. Most enemies are immune to one or more elements and weak against a certain one. As Mara is the only one who can dish out elemental damage (unless there's an enemy with an elemental bomb for stealing), she's your major damage dealer. While Bud does a good deal of damage, there are foes who are outright immune to physical damage, making him less reliable as a constant damage dealer. Crow's support abilities are just about always helpful, however.

This all works very well together to make fights challenging, though I found a few fights to be tedious, as 100% immunity to certain elements (and to physical damage, especially) draws out the battle as you have to spend a turn to shift Mara to the appropriate element, and then dispatch an enemy, and then rinse and repeat until you've got them all down. A group of enemies who are all immune to physical damage and each need a different element to kill felt like a bit of a chore.

Luckily, the majority of fights flow smoothly and some even have neat mechanics, usually involving Crow's stealing. For example, there are variations of a Puppetmaster enemy, where he commands his puppets to attack. Stealing the puppet's strings can have interesting effects, but each type of this enemy acts differently, keeping you on your toes.

Boss battles offer a good challenge, and you'll have to act wisely to make it out of them alive. This all culminates in a final battle that's very difficult if you made wise treasure-hunting moves and downright frustrating if you did not. It took me a good five or six tries to beat this one, but it certainly felt good when I finally got it right, and the fact that the fight feels so different depending on how you played the game really makes your choices matter along the way. The last boss fight also has a really neat dynamic that I won't spoil here.

The graphics are simple yet charming. They're almost-all drawn in MS Paint, and have a whimsical feel that really works for the game. However, they are sometimes mixed in with RTP graphics, which I felt clashed badly and didn't blend well. I would have much preferred if the game went all the way with the custom assets instead of what we got. Still, it's clear that a lot of work went into them, and the overall style really fits the tone of the game. 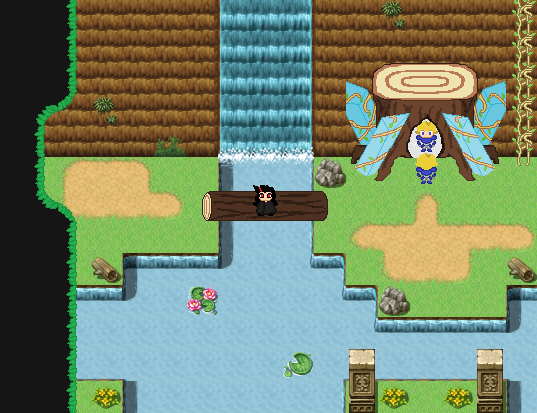 In such a small game, there is still plenty of story, told expertly in a minimalist style. This game has a fantastic sense of humor, and made me chuckle on several occasions. Housekeeping has proven once again to be a talented storyteller. The ending in particular was funny, touching, and beautiful. To elaborate on it anymore would be detrimental as I couldn't do it justice. I highly suggest you play the game and check it out for yourself.

The music is also all made by Housekeeping and is catchy and fits the game perfectly. The battle and boss music are especially awesome. The music really ties everything together and further makes the game feel especially solid, and the tunes are so catchy that I have the battle music in my head as I type this.

The game shows a lot of polish, from its custom graphics, spell animations, and sprite animations to its well-constructed battles that keep you engaged. A lot of work was put into it and it shows. The game is overflowing with charm, and the few low points in it are far outweighed by its merits. I give it four out of five stars and whole-heartily recommend it.

Close
07/04/2014 03:23 AM
Hey, Unity, thanks so much for the kind review! I was definitely going to go for all-custom graphics, but I tried to tackle water animations early on and was immediately punched in the gut by the cold fist of my own limitations (grass, too--I mean, holy crap, who knew drawing GRASS would be so difficult?). I was hoping decent mapping would at least keep the field graphics passable, but this was one of the victims of the deadline, and the unusual setting sort of required SOME custom graphics, so sorry for the clashing. Mainly I'm just pleased as punch that you enjoyed it!
unity

Close
07/04/2014 03:54 PM
That's perfectly understandable, and you did a great job, all things considered ^_^ I'm also guessing that other people who aren't as strict about art might not find the RTP as clashing as I did. Besides, like you said, grass and water are especially hard to draw, and I've spent plenty of time struggling with both of those.

I should have mentioned it in the review, so I'll say it now, your mapping is really good and has improved immensely since A Long Rope.

Seeing your growth as a game maker is inspiring! I'll definitely be on the lookout for whatever you do next (and the fact that you're working on another game has me excited ^_^).
Housekeeping