I've put Last Word up on Itch.IO for those who prefer to download the game in non-Steam-related scenarios! Long overdue!

As an added perk, I've dropped the price a couple bucks, too. Just a heads up! 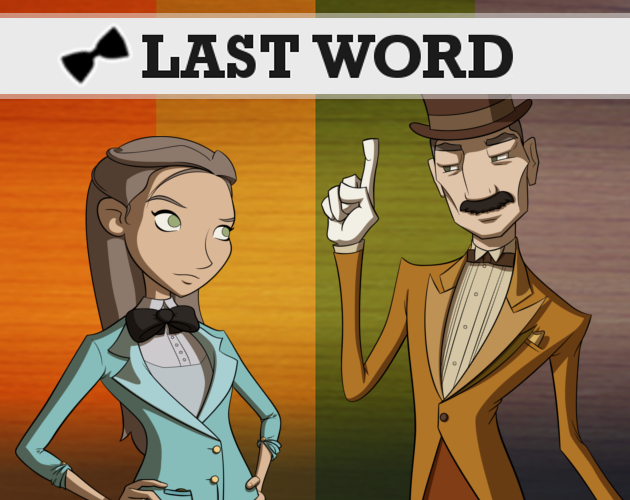 Last Word is done baking. It is being cooled so we can all eat it without burning our mouths. Yay!

The art alone renders you speechless.


There have been a lot of changes since the contest version. Whitty's an alien from the planet Ord, and Seymour, as Earth's Envoy of Linguistic Multitude, must welcome Whitty in her own language while minimizing the damage she incurs via her miraculous Death Mouth. Banter still serves wine.

Boasting is no less fat in the new version.

01. The character art is turning out great! I won't show them all off yet, but let this concept burn into your skull. 02. There's a lot of additional yumminess happening, but among them is the fact that there are (technically) four endings. Most interesting is that you can lose the last battle now, which is an ending in itself, albeit never as satisfying as winning. The other endings are optional and hearken to the Clue(do)/Whodunnit influences.

There are a ton of amazing pieces of polish and additions now, making the game feel more full and less like a side project. However, as I close up on progress, I can't decide what I should report on and what I should save as a surprise! In any case, I'm in love with this game, and I hope other people will feel the same way.

Here are some more changes that I've made. Quite a few are coming along really well.

01A. The menu is basically the same, but with a few little touches. The buttons have been re-mapped to make more sense. ENTER/C Shows descriptions, and SHIFT/Z equips (if possible). Wine bottle icons are different for each level of wine you find, and Skills show BOW icons when they're equipped.

01B. The Key Topics are now also marked with a version of the star icon that corresponds to the level of the topic. This, as you might be able to guess, means that each topic will now max at LV. 05.

02. The biggest thing is that the graphics have changed. The resolution was previously such that a pixel for a non-character object was actually a squared pixel. No longer! The new resolution means I get to add more objects as well as giving better detail to existing ones. This new title screen isn't final, but it shows off some of the changes.

03. The Discourse option used to only be for grinding (due to time restraints). Now when you choose Discourse you might win something extra through your witty persuasions. Gossiping for Key Topics can also be avoided in some cases, since the loser will spill the beans about the next step (if they know it).

04. Lastly, there are new Skills. Plenty of them have been polished or gutted and replaced altogether. Each character also has their own unique Skill that Whitty can't replicate, giving each discourse its own flavor.

Before long I plan to get some amazing artist to draw the profile pictures of each of the characters. I think that art overhaul and the extra gameplay and story I'm adding/polishing will really make Last Word shiny!

Last Word has undergone quite a few little changes and upgrades, mostly following some helpful feedback. It'll still be awhile before everything's finished and polished, but here are some of the changes so far.

01. Among many battle tweaks, you now have a projected arrow when selecting a move. This means that instead of counting out where the conversation arrow is going to land, you'll be shown. 02. The way you interact with people is still fundamentally the same for now, but after you Gossip, Chatter, or Discourse with someone, an icon (golden star) will appear next to it. This is sensitive to your selected Key Topic. You no longer have to remember whether you gossiped with Mr. Boasting about LV. 04 Mustaches. The game will tell you! 03. The VSFX (Vocal Sound Effects) now trigger half as often as they used to, rather than every time a portrait appears. I typically custom cue these sounds in games, but because of the contest I decided to make an automatic pull from available sounds. Not a lot of people liked that, which is cool, because now I make them hit a lot less. Even better is that you have the option to reduce the VSFX to zero if you like!

04. The soundtrack was pretty sparse. I've already added a few more tracks, and hopefully made a main hub theme that is less grating to some people. Here's an example of the final battle!