Introduction
I wanted to see how the hack 'n' slash part of this game was done, and unfortunately, it's a bit awkward and very clunky. However, I was noticing plenty of things worthy of a few extra points to the games score while playing. I was trying to decide mostly between a 2.5 and a 3. Maybe even a 2. Hopefully, after discussing the games' issues and positives I can make a clear decision. This review might get a bit lengthy, as I try to spend time on each part of the game's design.

So, the features in this game: sword combat, some skills added in, about four, and three stats: Health, Attack, and Speed. There's plenty of additional platforming gameplay mechanics, and an upgrade system for both your stats and the transformation of weapons. "ESP" is the currency for this, while gold is strictly for items and buying new weapons. Then there are four total levels, adding up to more than an hour for me. Probably an hour and thirty minutes of playtime. The majority spent in the first half.(I thought it was gonna be two hours, it was almost an hour by the time I was half way done). There's plenty of stuff in this game, obviously. So let's start with the combat. 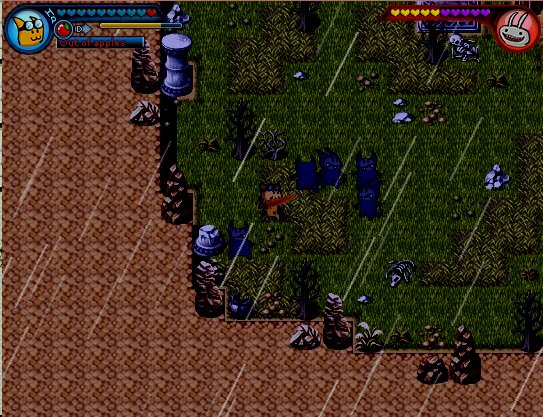 Very clunky, but some good UI and you can manage to get out of a cornering situation, luckily.

Let's talk about the sword combat, stats, skills, and items. Starting with sword combat, I'd say this is the weakest part of the game. Making sword contact with the enemy is very awkward with the way event triggers work, pressing "a" while moving toward an event to make an attack really doesn't work well. I mean, it was possible, but awkward to control who hits who. Towards the second half of my playthrough, I figured out when exactly a sword hit will hit a monster, and how to avoid the enemy attack trigger. Combat can be very easy, even on the hardest difficulty once you figure out how attacks are triggered and abuse it. Making contact with your sword isn't as satisfying as a hack 'n' slash should be.

However, I feel like the developer did pretty well with presentation aside from a bad sword swing animation. Enemies stagger from hits, default animations let you know who got hit, and enemies can't spam hits. Once you are hit, you have a second to back away to avoid getting hit too frequently. The UI works well, with a health system and an item switch icon that lets you know if you even have any of that item or not. Information is conveyed properly, and there was even a boss health bar sometimes in the top-right.(For the two major bosses).

Skills helped combat out a bit, but had their own problems. In a game like this, each skill should have it's own use that separates it from the rest. Once you get the last skill, an insta-kill for all enemies... why use the others? Freeze was a good addition, and so was the attack power up and barrier. Perhaps it should of stopped there? Don't give too much power to the player. Luckily, you won't be able to use a skill for every battle. But pretty much every other battle can be instantly ended with the fourth skill.

The stats weren't really effective enough, except for the health. With how awkward combat is handled, speed doesn't change much for the player, because it all depends on when they press the button when running into an enemy. Attack power didn't really have a big noticeable change either, but it was there. But overall, I didn't really think the stats worked well. There were critical hits, basically instant kills, but not much else.

Lastly, items. I uh... never used the golden apple, to start with. Water was a good, replenish-able system however, same with apples. There was one battle that had water nearby which made the battle easy, but apples were safely hidden from the player, being the instant heal they are. They were definitely useful additions, because combat did get a dose of difficulty every once in a while. 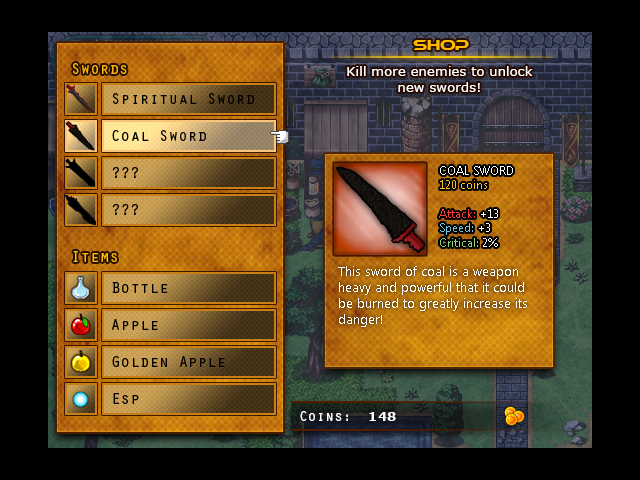 Good menus, but each sword is basically better than the last, and you'll be skipping a couple.

On to the rest of the gameplay, I'll start by saying: gold was easy to get. I basically skipped a sword after every level, yet I had enough gold to buy the other weaker swords anyway, for completionist reasons. I had enough ESP to fully transform every weapon I had, and fully upgraded the Speed and Attack paths, just starting HP by the start of the fourth level. It was a nice addition, the transforming and upgrade system. However, I could afford things too fast. I know I was going on to the last level, but I still had skipped a sword each time I went to buy a new one. A little too fast, in my opinion. Perhaps there should of been one currency, to make decisions on upgrades a bit more meaningful. 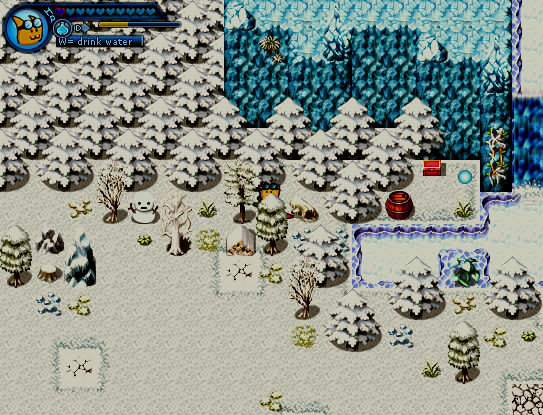 A little abuse of the jump ability left me in a... dangit, when was my last save?

There was a surprising amount of platforming from jumping, to dodging boulders, running across walls, using your sword to break plants in your way, dousing fires with your own water supply. The level design was pretty good, decent enough. The addition of spaces on the ground you should watch out for, from holes to weak ground that, with enough steps on, will eventually become a hole as well. Spikes too. They are included in areas with battles too, these environment obstructions. There wasn't much error to the platforming, and it was enough to keep me occupied from battle to battle. However, some things just shouldn't be jumped over. I jumped over trees and pillars a lot. If it was made so the plants can't be jumped over, these objects should be made the same way too. And then there was that part in the final level *shudders*, all but two of my deaths were from that platforming portion... probably around 20 deaths. It was a difficult portion due to the jumping mechanic. It was very tricky, but after A LOT of trial and error, I managed it. I almost gave up, actually. HUGE difficulty jump, although I could see other things trying to be more difficult too.
Other 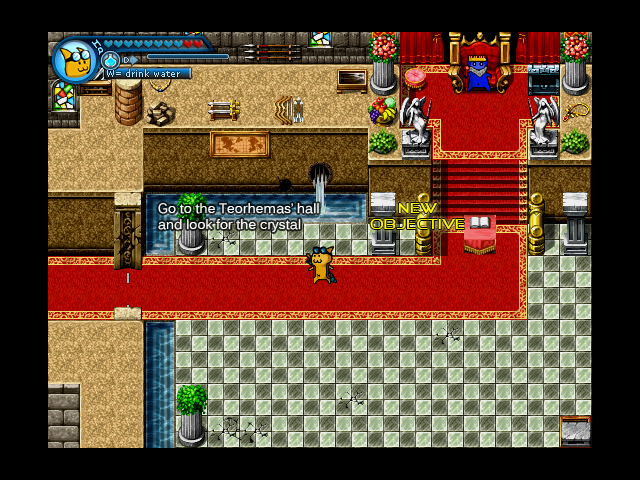 So, the writing was bad. However, English isn't the developer's first language and I totally understand the issue. However, they could of found a good proofreader who does speak English. I'm not letting it subtract too much from my decision, but the lack of a proofreader was a little bit concerning. I can't blame someone who's still learning the language, though. It's not gonna be a big deciding detail here, but in the future, I hope they look into finding a proofreader. I mean, everyone could use some good proofreading for their work, including me with mine.

Mapping was pretty decent. There are some odd placements of objects, especially in the castle portion. But I was satisfied with the environments, and the addition of "days" with the weather effects and color tints. However, the nighttime dark tint makes spikes hard to see, so when you have to act fast to dodge them... so painful. Back to presentation, I was happy with what's here. Good UI, scene direction was pretty good(excluding dialogue from the scenes) and even though the dialogue wasn't good, I still understood what it was trying to say. Even the thing about the dragon was a bit intriguing, but the whole thing just reminded me of Mass Effect. It has it's differences, of course, but I just kept thinking: "Ahh yes, "dragon". The monster allegedly approaching the planet. We have dismissed it as a star...".

I got stuck a few times in the game. There was a HUGE misunderstanding when attempting to enter level 2. I had to upgrade so I could destroy the plant in my way. I spent all my ESP upgrading... my speed path. I had no idea it meant actually transforming the weapon. Whooops! It wasn't very clear about that. Some puzzles were a bit awkward as well, such as controlling that enemy in the last level. I could never see where he was because of the camera. While the camera was trying during those portions where you control an enemy, it still slipped up a bit. It could use some better management.
Conclusion
So with it's design flaws in gameplay, there was plenty of stuff I appreciated, from scene direction, to the UI, good use of pictures and pop-ups. It was pretty decently presented, and I appreciated that. What ultimately makes this game a little less than average is the fact that the gameplay design was pretty flawed, now that I've gone over most it's parts in this review. However, with flaws in combat and stats and the upgrade system, there was still a promising element of fun in it, I admit. It needs plenty of work, but I feel the game wasn't too mindless, and provided a bit of enjoyment in playing. I mean, I did get a completionist vibe from collecting all the weapons and transforming them for the sake of it. And the level design wasn't poor or anything. Overall, this game just needs better execution in it's gameplay and a proofreader. It's just a little below average, so I'll give it a...

Close
07/13/2014 01:54 AM
I can see where your coming from here. The glitches just didn't add up so much for me. Though I think I do remember that part where you need to transform your sword. I think I also, after just purchasing a new sword, upgraded my stats instead. I think the more interesting part is after you cut the first bush I think you can cut other bushes without a transformed sword. (Luckily you can still get experience points to transform you sword, so its not game breaking.)

I think I covered a bit of this when I said the game handheld the player a bit too much. The upgrading should have just been allowed at the start of the game, then this problem wouldn't even exist.
outcry312

Close
07/12/2014 04:45 PM
If combat was better I would give it a four, being above average. There was more to the play experience then combat, you're right, such as platforming which I felt was pretty good. I was about to give it a 3 or 3.5 but then I looked at the gameplay overall and felt a 2 might be better. But then I looked at the pluses and felt 2.5 was a bit better. It's a little below average for me.

I also tried to point out the good scene direction and UI and good use of pictures. I didn't mean to focus too much on combat. I more so just tried talking about every part of the game's design. 2.5 isn't a bad score though.
kory_toombs

If the sword combat was better (ie. being able to hit enemies easier and quicker) I think I would have given it a 4.5 /5 instead of a 4. Though when I reviewed this game I kept in mind that combat wasn't the entirety of the play experience, well at least for me.
Pages: 1