A misnomer if I ever read one.

Dictionary is a story about, well a dictionary, sort of. Personally I'd put it more into the encyclopaedia category, since a dictionary focuses upon the grammatical structure of language. Whist an encyclopaedia does not focus on language at all, and the dictionary about which this game is based is most definitely not focused on language alone, in fact its major feature is on the visual arts, but hey this game is set in a world which is not our world so the category rules need not apply.

In fact the only dictionary type article in the game is the hilariously named 'Absolutely boring list of vegan spells from A to Z'. Seriously trust a vegan to make even sorcery seem dull (sorry to any vegans out there, but honestly your food is bland almost to the point of self harm). However that book is not the one that our sweet and fairly odd protagonist Merv stumbles across in his search of his Master's rooms. What he finds instead is the dictionary of things that do not exist in our world and within its pages his adventure begins. 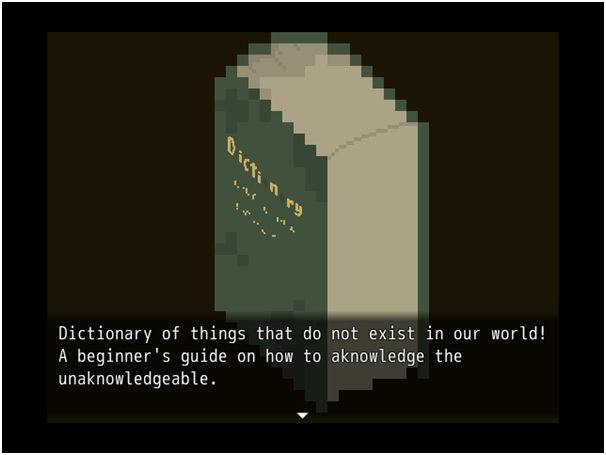 Even with the atrocious spelling and pixilation, you really would have to read it.

Merv is a wizard of sorts, well in truth he's apprentice to a Master wizard and one of his skills is the ability to use his master's portal to step into the pages of a book he is reading. Now I can understand why you wouldn't want to take a trip through the vegan spells, or even the one about repairing summoned washing machines, though that could be a bit of a hoot, but as far as a learning experience goes being able to step into the pages of a book is brilliant. Think how much more fun (and probably terrifying) history would be if you stepped into the action to see it play out. How many of the riddles of the ancients could be solved by a simple spell and a short trip? Imagine stepping into the pages of your favourite book to watch those characters you have spent so many hours with living their lives. Heck you could even find the answers to questions that have plagued you. What was in Julia's room 101? Where did the the Resurrection stone end up? What is the first name of Elizabeth Bennett's father? Still those are not the trips that Merv gets to make. No, he decided to experience this strange concept from the book of impossible things that has gripped his hearts (he has two) called 'Art". 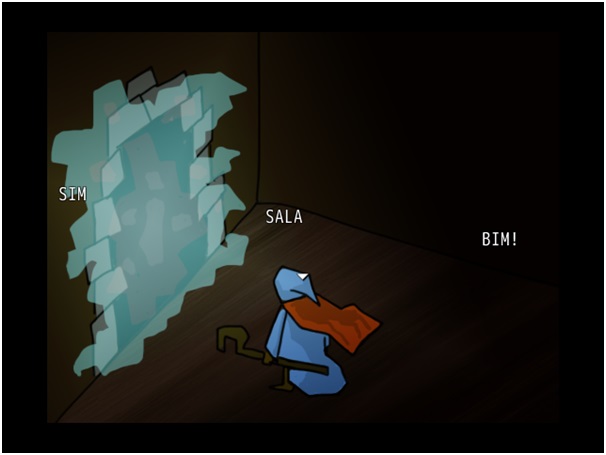 Seriously if you don't know the spell, hand in your wand and cape at the door.

You'd think with a term such as that we'd be in for a visual treat; a cornucopia of bright images and swirling brilliant colours alive with emotion, but oddly we get quite a bleak landscape, painted in shades of beige and grey, more like stepping into a sepia print than the murals of Diego Rivera. Still the native art style, all hand-drawn by the developer has a beauty all of its own, and the musical choices made complement the softly flowing storyline delightfully. The game is text heavy, as the name suggests it should be, and whilst there are a plethora of grammatical errors the simply yet sweet story, the images and the themes somehow seem to make the mistakes feel like a translation errors on the part of the character of Merv who is stuck in a world so unlike his own, rather than on the part of the developer, whose native language is not English.

Merv's character finds himself in the world of Art, a world under siege from monsters made of shadow and darkness who are leeching all the colour and life from the world. He is not a hero, just a little wizard lost in an unfamiliar world, but when asked to help, he simply cannot refuse and so he embarks on a journey into the heart of the greyness to rescue a series of colour enriched artefacts which when combined can help combat the stealer of happiness and save the world.

Combat is onscreen 'hack'n'slash' system controlled by either the mouse or keyboard, with most of the combat being a case of simply mashing enter until the bad monkey's and their evil larvae, zombies and scarecrow henchmen die, but you do have the option of a spell or two as well if you want to balance both the mouse and keyboard at the same time. It's a little clunky but luckily the combat part of the game is very easy and up until the final wave of combat there was never a real risk of Merv being seriously hurt in any of his encounters. Even that final wave can be countered with a bit of fast finger work to dodge around the spawning monkeys until they run out of energy and collapse. 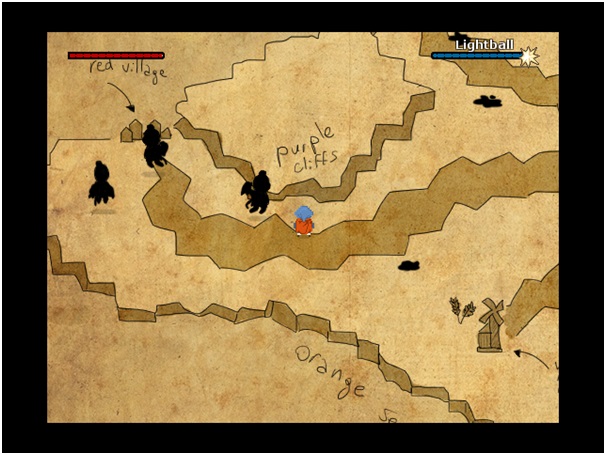 The evil flying monkeys at work in a world drained of its colours.

Along the way Merv runs across a number of characters and images that will be familiar to anyone who has ever taken an art class, or indeed spent some time in a museum, not to mention a fair number of pop culture references. Apart from the spell of Dante the Magician (corrupted slightly by Hadji from Johnny Quest) there are also multiple references to the Wizard of Oz, Vincent van Gogh, Marianne Goddess of Liberty, 1984, The Tempest and a host of others.

Given that this game was developed for the 2014 IGMC it was never going to be a long tale and the hand drawn graphics must have been time consuming for the developer, so I wasn't expecting the game to last the full hour, and my last save came in at a little over 30 minutes, but it felt like there could be so much more. The world that has been imagined in this game is rich and diverse for all that it was denuded of colour for a while and the home world of Merv though bland by comparison has its own appeal and internal consistency. I was charmed by the imagination of the developer and I would really like to see what else he will develop into the future.

In the end Merv's journey is a redemptive one, not just to bring colour back to the world of art but to consent to that art altering him in subtle and unsubtle ways and to take that change home with him and allow it to fill the corners of the world from which he came. To add light and colour and the transformative power of art to everywhere he goes.

As far as stories go, it's a fairly illuminating one and I would truly like to see a sequel to it, but if in the end this is all there is of Merv's story, it's a fine tale told well and one well worth telling. Close
06/11/2015 10:03 AM
Thanks for the review! I'm sorry I've read it just now.
Too bad about the plethora of grammatical errors, I asked a native English speaker to take a look in order to avoid that; I guess it wasn't enough.
I am currently toying around with a custom, less clunky action system made with another engine, who knows if I will ever be able to make a sequel or a more in-depth version of this short episode.
nhubi