Slimes is a space-based RPG, set aboard a star-ship that has been mysteriously overtaken by, you guessed it, slimes. Well not just slimes, but they make up the bulk of the monster types you'll face.

So our intrepid hero, called 'hero' at least for the first few sections wakes up to find he, sorry she, has fallen asleep on duty whilst collecting something from a storage closet. Anxious not to get put on reprimand for dereliction of duty she hurries back to her station to find all of her crew-mates gone, the walls and floors splattered with blood and a bunch of slimes running around in predictable patterns. 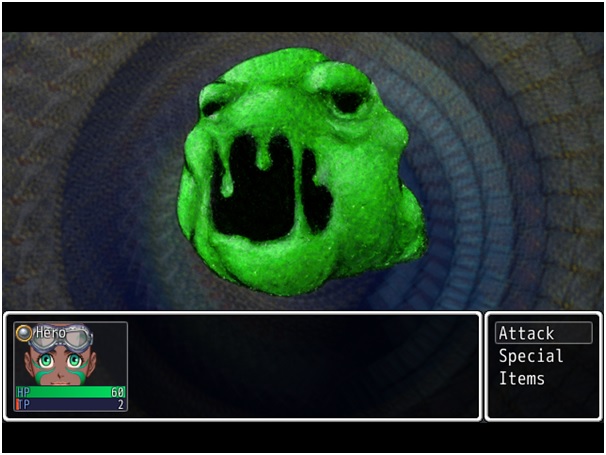 The Blob! Now in Widescreen.

From this point on she spends her time alternatively looking for other survivors, piercing together the mystery of what happened, a big clue to which is handed out in the first five minutes, and trying to get off the ship. Though why she would want to leave the ship is less clear than the other motivations. Still she finds a few people who like her managed to avoid the contamination that hit the ship and with them she tries to discover what happened.

There are a few odd choices in regard to progression, why on a spaceship that is touted as being 'Star Trek inspired' and has transporters, is there a train on board? Surely site to site transport or better yet turbo-lifts would have been more sensible. Why doesn't an engineer of lieutenant rank have a key-card to access the aforementioned train but needs to take it off the dead body of her captain? Why doesn't the same engineer have a thorough knowledge of the ship? Given her speciality there shouldn't be any sections of the ship to which she would be unfamiliar.

However notwithstanding those odd procedural instances onward we progress through our infested ship, collecting a security officer and a Doctor along the way to help in the fights with the eponymous slimes. Why is the Doctor on a spaceship always a smart aleck?

Battles are classic front view turn based with a TP counter for some of the characters to enable them to use special attacks, but the range is remarkably limited. The tank security office has a rage attack, the doctor and the engineer both have healing and the communications officer is your buff support but since the levels are capped at 7 you don't get more than a couple of skills. This unfortunately means that most of the battles are pretty much a repetitive button mash with the occasional special thrown in when you've been beaten around enough to have earned the TP for it.

Once you've managed to assemble your team you high-tail it to the transporter, sorry beaming room, and after getting some additional information via a flashback you head planet side, and that's when things go from futuristic to mediaeval. It's fairly jarring and a bit like the movie version of From Dusk 'til Dawn when you go from watching a road movie to a horror flick in the blink of an eye. It would work if the people on the planet weren't actually colonists from Earth who had settled a few generations back, but were a pre-industrial civilisation that you'd been sent to monitor. Worse still is the fact that the rustic wooden houses all have music systems and computers but without any visible form of power generation. It's a very odd and incongruous juxtaposition that could have been easily rectified by a simple statement saying these colonists were the 'get back to nature' type and had eschewed the modern conveniences beyond anything available in the 20th century (and maybe a hydro-electric plant for good measure).

So it becomes pretty obvious pretty quickly that the residents of this one horse town are hiding something from your weary away team members, so the solution proposed is that as you are strangers and therefore the villagers would be suspicious of anything you do at this point you should put on a play to hide your identities, and whilst the villagers are distracted by your amazing acting abilities one of you can go snooping around their town to discover their secrets. Because wearing a costume in a town of 10 people is going to be a great disguise, right.

Now don't get me wrong any game that throws in Shakespeare's Hamlet is going to get points in my eyes, but it just doesn't make a lot of sense. No costume in the world is going to hide the fact that the 'actors' are the same bunch of people that were around a day ago asking questions and generally getting on the villager's nerves.

There is a rather ridiculous puzzle in the old village that requires you to either take a screen shot of the decipher code, or a screen shot of the clue in order to solve. Which is never ideal, relying on out of game means to solve in game puzzles should be avoided whenever possible. A simple log would have achieved the same end, or even simpler have the communications officer remember the code when you need it for the password protected door, as after all communications are his strong point.

One of the things the developer has done right is the music, it's all from additional packs but it has been used here with a bit of finesse, the themes are all science fiction on board the ship and do well to convey that strange uneasiness that a mostly deserted ship would engender. The music for the flashback is dark and foreboding and menacing and even the themes for the medieval planet fit well. The only glitch is that the battle music doesn't appear to kick in when engaging with the slimes on the world map.

The ending of the game is remarkably rushed, with little reason for the final decision of the remaining members of the crew planet-side, though I suppose as the game started with an incidence of dereliction of duty there is certain inevitability in it ending in the same manner. Though it does show a remarkably callous attitude to the other members of the crew still aboard the ship, especially on the part of the Doctor, whose first priority is supposed to be the preservation of life, after all.