It's meow or never

Scaredy Cat is a tale from the perspective of Mia, a cat-spirit currently living through the last of her nine lives. She's never been particularly reckless in any of them, but she does fight bad guys so the occasional loss of life isn't unexpected. But what gives the game its title isn't her fear at fighting monsters, because even though she has that she still fights them anyway, or even the spectre of a vampire overlord, which is enough to rightfully frighten anyone. No, Mia's greatest fear is telling her best friend that she loves her. 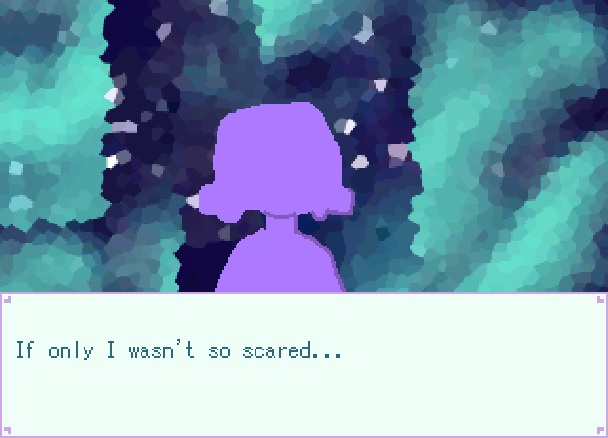 The graphics in the game are all custom, tile sets, sprites, battlers, everything and they are drawn with a simplistic but consistent 'retro' style, but since the game is in RM2K3 retro was pretty much what I was expecting. I really like the fact that our heroine, being a cat spirit can transform from a human to cat shape and her sprite changes to match. Though she tends to only make the transformation in the comfort and safety of her own home.

Music is also custom, and is sourced primarily from Kevin MacLeod and freesound.org, but it is used well in almost every instance, though I must admit the midi sounds, though in keeping with the look and feel of the game, aren't the best quality and do tend to grate after a little while. The battle music is the greatest culprit in that regard.

The beginning game play is mostly a series of short fetch quests to enable you to gather your band of like-minded individuals to help in taking down the Vampire overlord who is populating the local forest with all manner of monsters and villains. The definition of monster may be a little fuzzy here as at least one member of your party has is a horn-sporting demon, another is a fairy with a dark streak and since the protagonist is a shape-shifter we know we're a little off the beaten track here so it's more a bunch of guys who do bad stuff as opposed to the traditional monster route. Heck even one of the denizens of your town is a vampire who has a witch as a girlfriend and they're lovely and helpful and cutely romantic too. 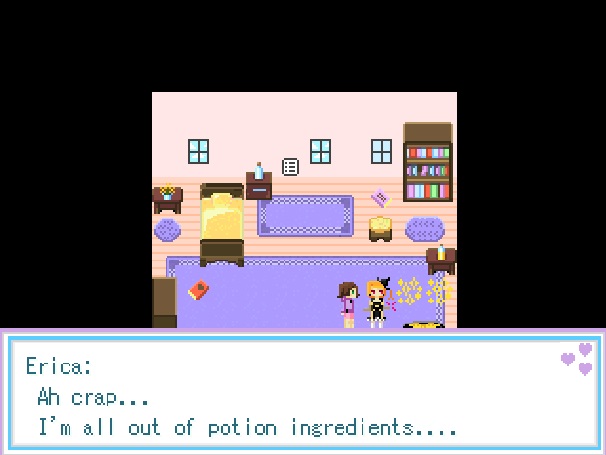 The town itself is just wonderful, every house has an inhabitant and most of them have their own personality quirks and motivations, from the hippy letter collecting Lila and the pizza loving wolf-man Luke to the militant angel Steven. In addition you've got a store, town hall and post office and a local library for researching purposes, as well as a friendly mermaid who is happy to teach you how to swim, even though you are a cat and not fond of the water at all.

The preponderance for the colour pink is probably the only thing in the town I wasn't that fond of, but I'm showing a bit of bias there, pink has never been my favourite colour. Still it fits the pastel theme and colour scheme well enough. 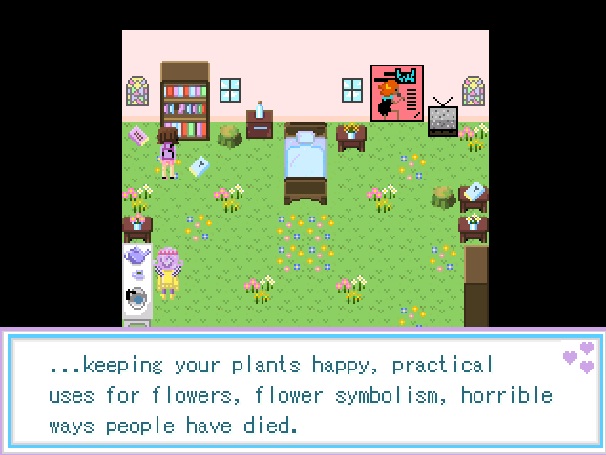 One of these titles is not like the other ones.

Once you've gathered together your band of brothers sisters and have solved the puzzle of the crying ghost you get to adventure out into the forest that is being overrun by ghosts and hell-hounds and the like and enter into some battles. The monsters are all visible, and in most cases avoidable except for one on almost every map that is placed to block your forward progression. It is classic front view turned based battles with little customisation other that the graphics, but the skills are interesting and fit the character profiles pretty well. Each of your characters starts at level 5 with a full equipment roster and the levels are capped at 20. It doesn't take long to reach that maximum, less than thirty minutes real time fighting and I didn't need to grind at all to achieve it, simple chose not to avoid any battles. Each area you go through ups the hostility of the monster you are facing and the rewards for defeating them. 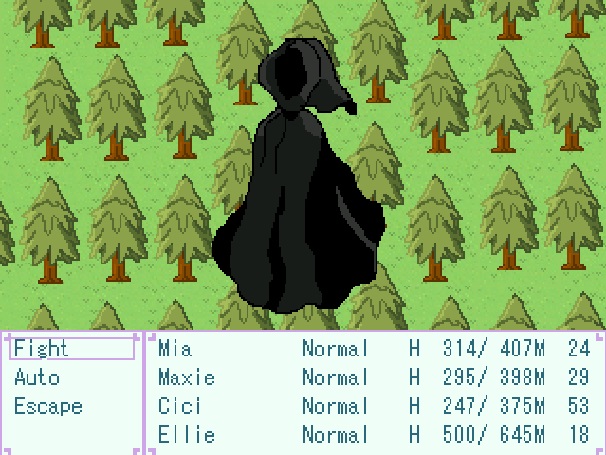 There are a couple of very simple puzzles, one of which requires Mia to step outside her comfort zone and transform into a cat outside her home, in order to enter the castle of the Vampire and to find out just why she is terrorising the neighbourhood. Which wasn't actually something I was expecting though I suppose if I'd thought about it in the context of the game it would have made sense. Still I found it fun, and since I'd saved just before entering the castle I could see both endings, though of course I chose the good one as my real option.

Scaredy Cat is a simple short game with a cute bunch of characters and a sweet and somewhat naive storyline that also happens to subtly illuminate a statement about society, which is slightly less subtle if you check out the characters biographies in the bonus room at the end of the game.

If you feel like visiting a retro world for a while for a sweet non-battle driven story then I would recommend you spend some time with Mia and her friends, they're a fun bunch of people.

I'm probably going to ramble on a bit here because I am very excited about my first game getting it first review! And to be honest I wasn't expecting a review as positive as this from anyone; I was bracing myself for a rip to shreds review. So I'm thrilled. I wasn't trying to turn any genre convention on there head, in fact a " simple short game with a cute bunch of characters and a sweet and somewhat naive storyline" is exactly what I was going for.

I will definitely keep in mind your critiques for future games, which will hopefully be more complex puzzle wise and just overall better sound wise. (and fancier art wise and ...ect)

Also I'm glad the plot twist was a plot twist for you! I imagine for some it won't be but oh well. Also interesting is some of the symbolism you found in the game that I didn't intentionally (consciously at least) put in there. But since you pointed it out I'm going to run with it.

Again thank you for taking your time to play and review my game!
nhubi

No problem at all, I really liked the game, it was a fun hour or so and that is something worth noting. Most of the people you'll find here on RMN aren't about ripping games to shreds, more about constructive criticism, though it can vary from polite to brutal. Still there was little in the game I could apply my brutal brush towards so well done for your first endeavour!

I actually liked the native art style, it works for the engine. If you are intending to move up the scale to VX or VXA then it may not work, but the free feel of this style really works for RM2K3. The music also suits, it's just not something I particularly enjoy, but that isn't a reason to change it if it works for you. You are the developer, it has to be your vision.

I do always find it interesting when a third party (reader, player, observer) sees something in a piece of art that the developer had not consciously included, when the authorial intent is expanded upon within the mind of the third party. I'm exceptionally pleased to be that third party for you, as I always enjoy receiving feedback from my non-aligned observers to my own work when they see something I did not consciously include, especially when it instinctively echoes my world view.

I doubt this will be the last review you get, and I do look forward to seeing what else you produce into the future.
Pages: 1