What is Skill Augmentation?
With the assistance of Myla, a personality relevant to the events in the Polis, you can exchange prayer tablets--the basic component of an artificial Precept--to enhance the potency of a spell or shift it towards disciplines of magic outside of its original intent. By folding the stored Essence of the "wrong" tablet into a Precept, you can create a skill that borrows some of its power from that same "wrong" Essence.

(If that sounds like world-building fluff, it's because it is.)

Skill Augmentation is a form of customization that prompts the player to properly manage a resource (tablets) over a long period of gameplay. The player must critically think on which skills are most useful to them, and whether the player can afford to spend their myriad "currencies" on enhancing that particular skill. Would they be better served by enhancing a different, competing Precept? Would they prefer to hold their tablets and see if they get a new Precept worth enhancing? If the player enhances their main nuke to gain a buff-dispelling effect, they must suddenly hold that spell to respond to enemy buffs instead of simply employing it for damage.

Every other element of Essence Enforcer's gameplay happens on a per-mission level. You can rearrange your skills between characters how you please, you can take as many tries as you like for a given mission, and your HP and status resets between missions. Skill Augmentation and tablet management is the first form of gameplay that Essence Enforcer offers that has lasting ramifications over the course of your playthrough. 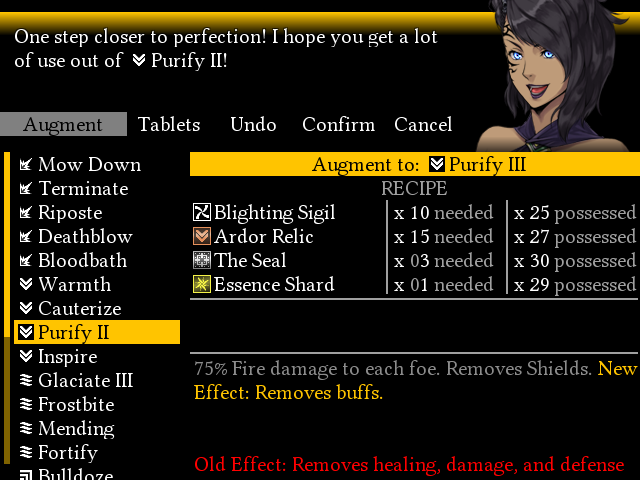 Tablets of Bronze quality or better can be hard to come by. Unless you're the developer, cough.

Why add Skill Augmentation?
Design-wise, this is a solution to a problem no testers brought up, that has to do with how gameplay extends into mid- and late-game encounters. As the game progresses, keeping your own party's stats up and the enemy's stats down will be mandatory to mitigate the damage enemies will be capable of.

Allowing both parties to modify maximum HP and healing output as stats opens up a ton of interactions with draining skills, abilities that heal a percentage of health, skills that trigger at critical HP, and so on. More interactions and decision points between skills is never a bad thing, to a point.

Three of these four stats--Maximum HP, Healing, and Damage Taken--are defensive by design. Not only to increase each others' effectiveness, they each respond to different kinds of incoming damage. Improving healing is a better countermeasure to sustained damage over time, for example. On top of all that, the secret fourth defensive stat--an enemy's Damage Dealt--forces the player to prioritize which targets are the greatest threat at a given time, based primarily on which Essences they're holding.

As the game goes on, the damage potential of enemies becomes a larger and larger portion of what the player can survive on their own. It becomes increasingly important to use stat modifiers to bridge the gap. 1,000 damage isn't conventionally survivable, but 422 (1000 * 0.65 * 0.65) is much more manageable at the end of the game. It gets to the point where enemy dispels can be the most dangerous action in their arsenal.

How does Skill Augmentation help?
The skill pool in Essence Enforcer has to be constrained due to how skill slots are handled. To keep in-battle information clutter low, each character can equip up to 16 skills, meaning there can only be so many skills to collect. Having an available pool of 400+ skills is meaningless when you can only take less than a tenth of them with you. Furthermore, once you have that many skills in your game, some will end to overshadow their competition. Players will take their best available single-target heal, their best buff dispel, and so on.

Contradicting this, however, many players derive enjoyment from constant improvement in their skills and capabilities. Given that I can only hand out so many skills before some of them see neglect, I began to search for ways to expand the pool for players who enjoy diversity. At the same time, I wanted a solution that didn't require me to dilute the pool with a bunch of same-y filler spells; meaning that as the player added newer spells, older spells would go away. This line of thinking about skill replacement eventually led me to skill Augmentation. Skills will become increasingly more complex each time they are Augmented.

Eventually I was lead to a system where skills can be Augmented several times, and each augment adds one or more effects to the skill. This adds meaningful power to each skill--adding an HP drain effect to what was previously a pure nuke, for example--without pushing the skill up and above its competition.

For example, Riposte and Cripple are both Physical nukes with equal damage. The former blocks one attack for the user, and the other prevents the target from healing HP for a turn, giving them different use cases. Augmenting Riposte causes it to dispel Damage buffs on the target, raise the user's Damage for several turns, and add a critical-hit mark to the target; but a player with a fully-Augmented Riposte will still find Cripple useful for its heal block! If Riposte simply dealt more and more damage each Augment, Cripple would be comparatively worse unless it too was Augmented. By adding more effects--not necessarily stronger ones--Augmentation allows a player to diversify their toolbox without trivializing the decisions between different available skills.

Lastly, as the player accumulates more Precepts and Augments those skills over the course of the game, they'll find both their own skills and their opponents' are increasingly complex in how they're used and how they interact. This is a wonderful side-effect of adding Augmentation: the player must consider more and more information as the game progresses, and weigh their decisions more carefully between one skill or another. Two different heal-blocking skills may offer dramatically different additional effects, and the player must decide which they need now and which they need to save. Do they use the heal block with a dispel and risk the enemy buffing themselves, or do they use the heal block with a drain attached and risk missing out that healing later on?

It also gives the player a point of lasting personal improvement. Learning an enemy's attack pattern will help the player only so long as those enemies show up. Learning a cool skill interaction inside their own kit, however, will help the player for the entirety of their playthrough, giving the player room to improve at playing Essence Enforcer and providing the satisfaction that comes with increasing mastery at the game's challenges.

Conclusion
I wanted to push out an update on my recent progress without spoiling any developments, but it will be a while yet before I produce any story events that don't constitute some form of spoiler. So, I pushed out a gameplay blog instead. I have an existing feature in mind that I'll probably blog about down the road; as well as another, yet-to-be-implemented one, if either of those prove looking forward to.

Either way, I appreciate anyone who takes the time to read all of this jabber about Skill Augmentation! The ins-and-outs of designing a game around strategic decision-making has always fascinated me, starting with, "How is it possible to lose at a game where you have unlimited time to plan your moves?" The answer seems to be, vaguely, "give the player more chances to make mistakes," but that's a topic for another blog post entirely.

With Skill Augmentation, I hope to create a huge stream of decisions for the player to consider and weigh and select based on their needs and preferences. If the player, scrolling through the list of available augments, feels themselves to be in a candy store picking out treats, I've succeeded in some small way with this feature. Augmentation provides many opportunities for mediocrity, no chance for failure (you can always acquire more materials!), and no small chance indeed for the player to succeed purely due to their own informed decisions.

From what I understand, players like to succeed under their own power.

Personally, I totally forgot to leave a comment. "This looks good. Can't wait to see it in action!" seems a bit too forced, but I can't really find anything to talk about, as it sounds like you got it all planned out.

This looks good. Can't wait to see it in action!
LouisCyphre

author=Red_Nova
Personally, I totally forgot to leave a comment.

But I need my ego stroked!

author=Red_Nova
This looks good. Can't wait to see it in action!

What I was hoping to see was people talking about the ways they've seen this done poorly in the past, or common pitfalls of games like this. I want to make sure I don't walk in to them blindly!
Pages: 1