Delusions of Duty did not delude me!

Delusions of Duty is a very short game made for the "Fundamental RPGology" contest, where we were expected to create a battle system. So nothing complex, even if here we have a context and a little story, that will be explained ONLY if you win (otherwise you will get a bad ending, and that's all!).

Ok, so Samale and Chase are two ex-friends running one from the other on a beach under the rain. They are now enemies on opposite sides, even if in the past they studied the art of the sword from the same master. And nothing can prevent a duel that will leave only one of them standing... 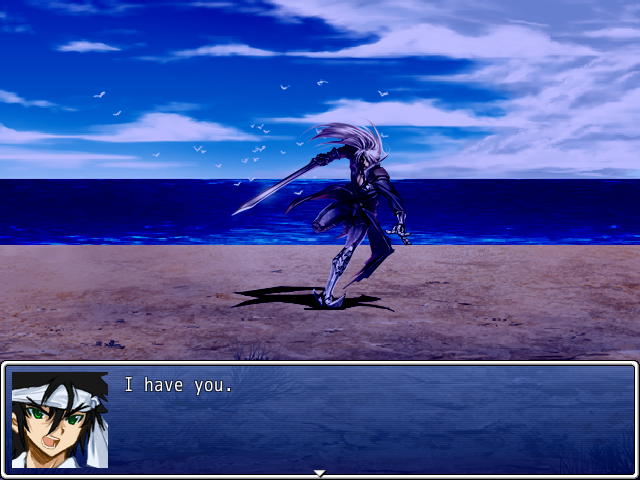 Ok, so to learn the background and why they are fighting you have to win. In Delusions of Duty you play as Samael even if there is little difference between the two fighters: both have the same set of abilities, anyway before starting the game you can choose to skip the introduction, the instructions and set the difficulty (Fortunate, Normal and Cursed) that reflect Samael's condition (if he is ok and fast or tired and slower, already wounded, and so on...).

The key to victory is outsmarting the opponents, checking his behaviour: guarding or using defense skills when he is aggressive, for example anyway it's not so easy since each skill or attack always unlocks two other skills or attacks, that will unlock two more of their own, etc etc. This makes the combat encounter strategic and complex, and I admit I find it very clever. On the other hand the duel is not short, but a series of many exchanges, so I'm glad that this system is used for just one encounter (it may work for a game with a couple duels, but not one with many less importan combat encounters). Also I found it pretty challenging, anyway it's a good thing, it's just one boss fight!

What else? Well there is also a short story, anyway there is not much I can say without spoiling it, anyway it's a bit vague and leaves most details (like the past between the two opponents) out of the picture, but I did not mind too much.
Graphically the game uses Rtp, but like in Illusions of Loyalty these are really well used. I especially liked how the facesets display various expressions depending on the mood and the charsets have different stances (and this did not happen in Illusions of Loyalty), and that's really well made and accurate, so kudos for this! In total there are four characters and three maps, so do not expect a lot, but what you will find is made with care and attention to the details. Different attacks have different effects and the strongest ones also display the attacker face when unleashed! Cool. 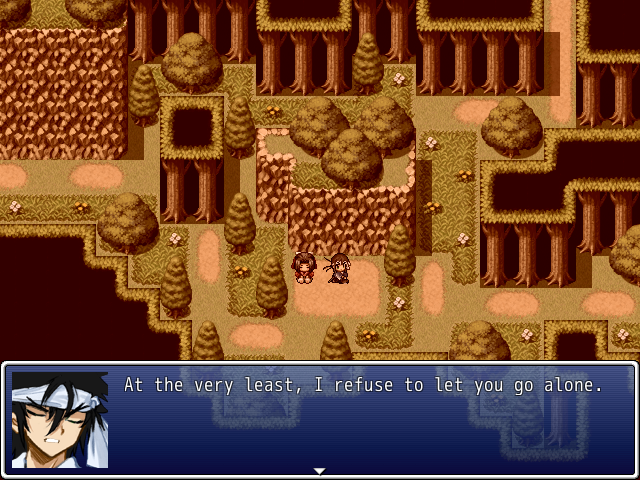 Final Verdict
I call this a "small but nice experimental game". I mean combat is atypical but well made, and contributes to the feel of uncertainty (in my experiences I always won or lost by a short margin). I also liked that exactly like Illusions of Loyalty, this game presents a situations where there is no hero, just men involved in a situation and taking sides.
But ok, the story if just a frame for this original combat system. Taking in account that this was made for an event, I can rate it accordingly, saying that...
it was short but not bad, not bad at all!

I'm glad you enjoyed it!

Apologies that the window doesn't have an easy resize option in this one. I lost the project file so I wasn't able to go back and add that script. :(
TheRpgmakerAddict

author=Aegix_Drakan
Oh hey, wow, I wasn't expecting this one to ever get any more reviews, considering it's a tiny experimental game. XD

I'm glad you enjoyed it!

Apologies that the window doesn't have an easy resize option in this one. I lost the project file so I wasn't able to go back and add that script. :(

Well I always take in account if the game is a short event game. Anyway recently I've been fond of trying those games I missed so far... especially if they are short!

You know what? The window size was perfect, and I usually have to resize it (except for the rm2kr games, when (I post the reviews I use the 640x480, bigger pics may be only hald visualized).
matbel
0