Put the wet stuff on the hot stuff.


Note: There is a game-crashing error in the campground scenario, which ends the game. However you can avoid it with a quick edit as the developer left the game unencrypted. The comments on the game-page give instructions.

Fire Department is a simulation game modelled on Theme Hospital and made by bentelk for the August 2014 #1GAM challenge. The challenge required you to complete a game in a month, though according to the game-page this game was only made in the last week in August. In it you are the fire-chief in charge of a short-staffed fire brigade, you need to make sure that your fire-fighters are equipped and ready to respond to emergency calls in any situation. You gain experience by fighting fires, in this case in the literal sense as the fires you are sent out to extinguish play out as a classic turn based combat. Each fire type reacts differently depending on whether it is chemical, oil, electrical or common combustible. Or at least you would get those options if the game went on beyond the point at which the developer ran out of time. You do however know what you could have been fighting via a series of in-game manuals handily held in the fire station's library. 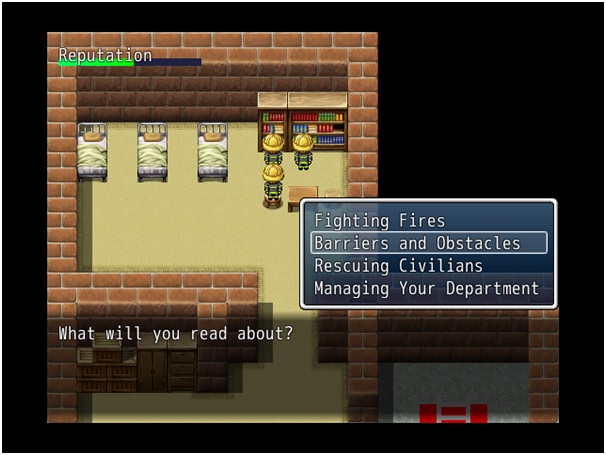 I hope there isn't going to be a test.

The game play is simple but a little addictive, if you are the sort to enjoy simulation type games, which I do. Not only do you need to ensure that your team is well equipped, they also have to be well rested. This is where one of the nifty scripts comes into play, Yanfly's party manager. As you can only have three person teams fighting each fire you swap out different characters depending on the situation and their level of experience and expertise. Allowing a character to rest up in the station between shouts also heals them of any damage that has occurred in fighting fires and is in fact the only way to heal up your party members, so you'll be rotating a bit until you can upgrade their defensive equipment. You start the game with a full complement of three which means you have no choice but to use them all in the first fire but once you begin to gain reputation you can recruit new members to the brigade. Reputation is awarded not just for the extinguishing of fires but from the rescue of civilians and pets.

There are some odd stylistic choices in this game, the most obvious of which is the total lack of music and sound effects. The fire station sections are devoid of any sound at all, which is odd in the extreme, since if this were portraying an actual fire-house there would at the very least be the sound of the dispatch operator, and more than likely music or TV going for the on call fire-fighters whilst they wait for the next shout. The combats likewise are fought in silence, not even the crackle of the flames or the sounds of contained breathing behind your protective face-mask. Equipping your fire-fighters via the equipment cupboards is also slightly odd as none of the upgraded equipment actually changes any stats just the resistance to varying types of fires in the case of armour and the type of fires you can successfully combat in the case of weapons. Since you only go up against common combustible and a single instance oil fire during the course of the game the specialised extinguishers and tools can be mostly ignored.

The graphics are all RTP with the exception of the sprites for the fire-fighters who are all shown fully clothed in their turnout gear including helmets at all times, and the fire truck itself which isn't a sprite, but a tile image. 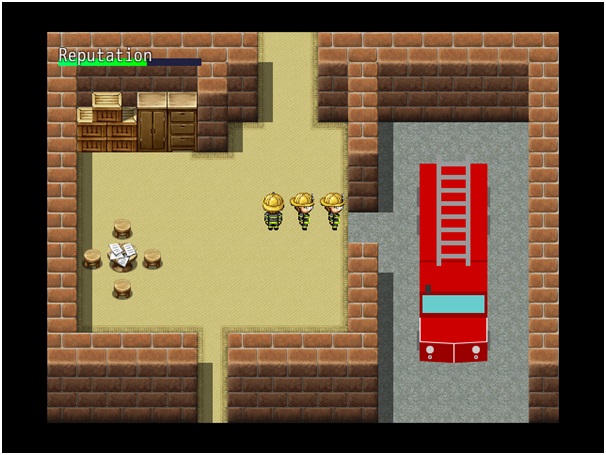 Ok, which one of you jokers put the engine in a compactor?

Each scenario has a meter showing the structural integrity of the building, the longer you are inside with fires burning the more damage is done to the building. If the integrity drops to a critical level the building will collapse with your people inside and it's game over so it is imperative you watch that gauge. Unfortunately it may also be the culprit behind the glitch, as the developer has set up a call to check the integrity in an outdoor scenario where it isn't relevant and seems to cause the error.

If you make the edit you'll experience six different emergency situations ranging from the problematic campground to a suburban home complete with an endangered puppy that needs to be rescued. Whilst the game is fun and has a lot of potential for increasing complexity and management opportunities, the cut-down version on offer here does begin to feel a little old by the time you clear out that fire and get that slightly sooty puppy back to its owner. I would have liked to see where this could have gone if the developer had actually spent the entire month making the game rather than completing it in a rush in the final week.

As a proof of concept I would rate it a success, as a game on its own, even without the game-breaking bug it leaves something to be desired.