NB: There is a game breaking bug about 20 minutes into the game (depending on which direction you go).


Element World is a demo game, the full version is available for purchase at ichi.io, however given the lacklustre state of the demo as well as a number of glitches I could not recommend that it would be worth the money in order to continue the game.

The game opens with the classic fish out of water scenario (well actually it starts with a rather long winded and slightly disjointed info dump), in this case the fish is a gentleman by the name of Nicholas Shepherd who discovers a dimensional portal from 'our' world to an inner world that can be accessed by anyone that finds it, or possibly only homeless people or members of a noble family, the info dump is a little unclear on this point. Still supposedly it's not just people that have access to this world, but also beings of higher and lower dimensions to add a level of danger and of course there are magical and special powers hidden in the world to add the reward for the risk.

So Nicholas finds himself inside a house and we run across the first of the many glitches in the game, walking up from the first floor to the second transports poor Nicholas onto the roof with no way off and triggers the first cut scene. 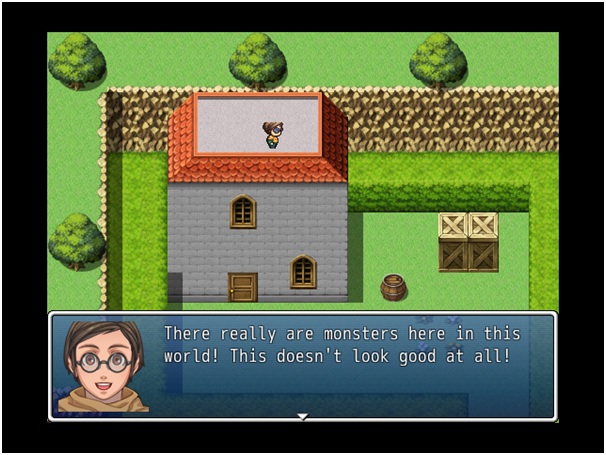 Luckily the end of the cutscene resets the character's position so you don't need to restart the game, though it does drive home the point that saving the game often is probably a good idea as there are a few other glitches along the way that don't fix themselves. The cutscene contains the tutorial battle which is the standard front view turn based that comes as the default with VX Ace. The battlers are custom and are not something I have seen before so I'm going to assume they've been done for the game. Whilst that is always appreciated the battlers themselves are very simplistic and stylised which doesn't fit very well with the remainder of the graphics in the game. Still it is one of the few custom parts of the game so it should be noted that the effort has been made to give it a different look in that one aspect.

The remainder of the graphics are all the default and they aren't used very well; most of the maps are blocky with fairly symmetrical features which don't feel natural at all, though I do appreciate the fact that the monsters are all visible and combats are initiated on touch, however given the erratic movement of the monster sprites repeated combats are almost unavoidable.

The game is very linear with graphical elements blocking further progress in all areas except the one that the developer wishes the player to follow. It's a tried and true method for corralling the player, but in this game it's a little more obvious than in most and it feels quite heavy handed. It would have been better if the developer had used less obvious graphical elements to block paths until he wished the player to explore those regions. A grove of trees that disappear once an axe is found for example rather than row upon row of boulders that look completely out of place on a plain grassy field and then appear to need to be removed one by one by an item once it is discovered.

The game spends quite a bit of time telling you that your first port of call should be the shop located at Tropical Cove. 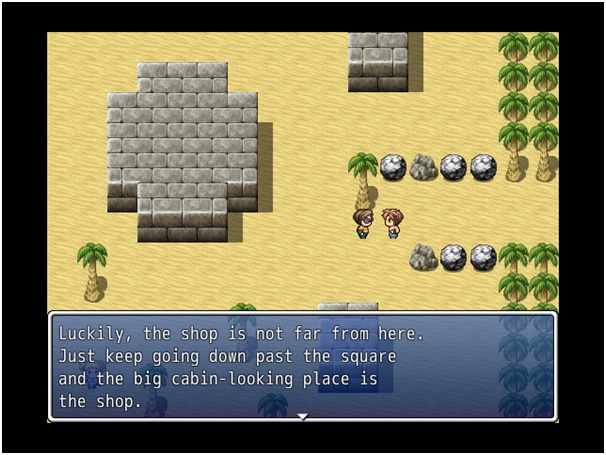 Got it, you're only the fourth person to tell me that.

The shop is supposedly the place where all your answers will be found, or at the very least you'll be able to pick up a weapon or two, as you've been taking on all the battles without one up to this point, also it must be said without any skills either. By the time I'd reached the outskirts of the Tropical Cove I'd reached level 4 and the battles were a simple button mash as there were no options for strategy in any form, and indeed given the fact that Nicholas isn't sporting any weapons or abilities it's a slow button mash at that.

Unfortunately once you do manage to wend your way to the mythical problem solving shop, you are faced with a game ending glitch. The map reference is wrong or not included in the game package as the game is looking for map 043 and there isn't one available. Since the shop obviously contains not only weapons for the player but also quest items for the various people who are blocking the player's path not being able to access this place means you simply cannot progress.

If that was meant to be the end of the demo then the developer should have provided a more polished exit message than a game crash, if it isn't then this game needs to be looked at so potential purchasers can see the demo in its entirety and be able to make up their mind as to whether or not it is worth the money that the developer is requesting for the full game. For this player however, there is little to recommend spending any money for the full version of this game as the demo is unpolished, quite tiresome on a visual level, unbalanced in regard to battles and skills and with a somewhat confusing limited plot for the player to deduce this inner world and the main character's place within it.