Please note: The version I reviewed had a game breaking bug about two hours in. However the developer has since fixed that issue. As such the review score was amended.

All right, I'll be honest, not like I'm not usually honest but I feel I need to point this out, I thought the name of this planet, and not coincidently the name of the game was unimaginative. Nicolas? Who names a planet Nicolas? Ambar or Nephros or Gantia, heck even Tau Ceti V, if you feel the need to be detached, but Nicolas? I thought maybe it was snowbound with small multicoloured denizens who liked nesting in trees and a plethora of antlered animals capable of pulling sleighs, that would have worked, but it isn't. Then I went and had a look at the minor planets listing, do you know there is a planet out there called Mr Tompkins? One has to assume after George Gamow's classic, (rather than someone's cat). So Nicolas is tame in comparison. There is also a Nichols, one hopes after Nichelle because that would be cool, and a Niccolo, Nicolaia and plain old Nicole, but as yet no Nicolas. But I digress.

So the game starts with the journal of a space marine, and I'm already hearing the Alien theme, so that's a win. This grunt is tasked with what should be a simple mission, he and his team head to the industrial world of Nicolas and provide basic military support. It should be a cakewalk, it should be trouble free. It's not. 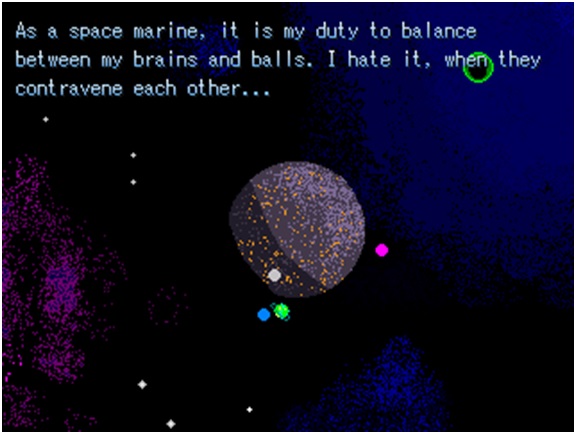 So after coming out of extended hypersleep you arrive at Nicholas to find one of your ships has crash-landed, there has been no contact with the mining colony and there is some form of Xenomorph clustering and breeding around the heat out-take exchangers from the mining equipment, so basically it's a bug hunt. So much for a walk in the park, and yes I'm reaching for my metaphorical M41A Pulse Rifle.

After arriving planetside you're tasked with heading to the crashed ship to see if there are any survivors as well as changing the energy cells at each of the mining stations that were established 5 years previously and dealing with the pest control problem, just another glorious day in the Corps. Provided with a handy interactive map by your CO, and seriously that thing will be your friend, you head out into the wilds to see what will jump out of the shadows and try and eat your face. It doesn't take long. 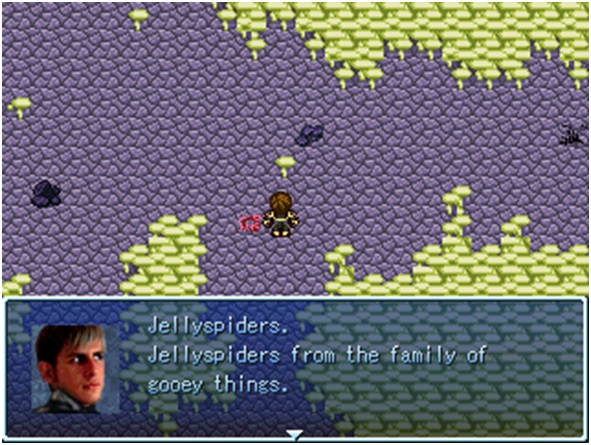 Accurate if not exactly Linnaeus approved.

This is RM2K3 so battles are all side view active turn based without any customisation other than the battlers themselves and the quite satisfying sound effect the developer has included when they expire. The battles however are not easy, mostly in terms of resource management. Your SP is quite limited and since most of the time you are attacked in groups and your only group actions are SP reliant it can become a bit of a delicate juggling act to keep yourself alive in the wake of jellyspiders and sliming cave snakes who poison, stun and slime you. They don't do a lot of damage individually but cumulatively they can be dangerous and as everything you go up against at least at the beginning seems to move twice as fast as you your HP can deplete with alarming alacrity.

The music in this game is an odd mix, all of it is custom, but it is interspersed with some random electronic and electrical noises, some of which are easily identified as an old ink-jet printer starting up and an electric fan which seem a little out of place in a future world, but they aren't too jarring. The sounds of rock falls within the cave system however is a little off-putting, I kept expecting a cave-in. The graphics are a mix of custom and default, and a lot of work has gone into the battlers and tile-sets. The world looks suitable barren and hostile, as you would expect from a world designated as only a mining colony. There is no lush vegetation and flowing rivers here, just barren rock or crystal caverns with rivers of lava and what looks like necrotic poisonous fungi and a bunch of hostile aliens who don't look like something you'd throw on the BBQ unless you were starving. The face-sets appear to be actual photos of people that have been slightly pixellated and distorted so they match the RM2K3 look. It wouldn't surprise me to discover they are the faces of the developer and people he knows as some of the dialogue seems to carry an in-joke that has no in-game reference. Then again as the game was developed originally in Hungarian part of that could be the cultural clash and mistranslation. The English is actually pretty good with only a few obvious errors and most of them in idiom use, which are pretty hard to grasp in a non-native language.

There are a couple of game-breaking bugs early on. The problem with translated games that mix English with the original language is that at times it can break the link to resources, so quite a few times I had to go in and find the relevant items from the error message and rename it to match a non diacritic version. Luckily save is always on so I learnt to save quite frequently until I'd managed to catch all the non-xenomorphic bugs I could. If the developer doesn't get around to releasing a patched version the list of files I had to change is the first message on the first page, so it'll be a simple rename job for anyone who wants to play the game without these particular errors. Up until a point, that is.

So after finding all the abandoned and unpowered mining stations around the area of your initial landing and hunting down and killing 15 jellyspiders for the scientist back at the lab you move on to investigating the crashed ship dodging some hidden trap monsters on the way that you can't actually fight but that damage you for 100 HP before expiring. The alien equivalent of a honeybee. 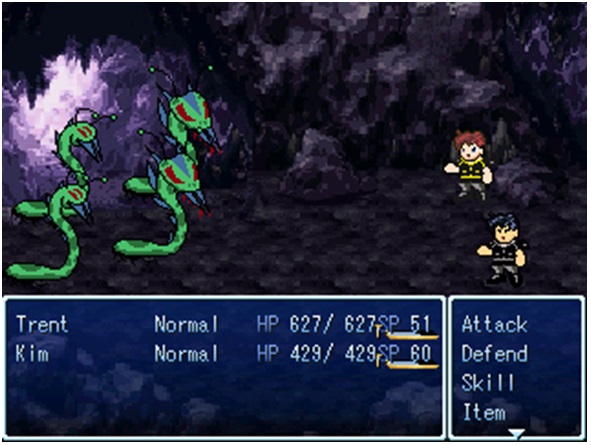 Come on aliens! Show me what passes for fury among your misbegotten kind!

The ship is a wreck but luckily the pilot managed to survive and keep herself alive against the jellyspiders, but then again, supposedly she's from Mars, (she obviously never read the book) where the people are just tougher than the 'mudgrubbers' from Earth. Irrespective of her kick-ass persona she is still relegated to the obligatory healer role. So now the party is three. After a few more minutes of wandering through the cave system you finally make it back outside just in time to get a frantic call from your base. It's under attack from unknown assailants, the Lieutenant is dead, the security bots have turned against what is left of your team and your science advisor is trapped. So back to the base you run, well walk because this is RM2K3 so running is not on the cards, but you do have a handy clock ticking down the seconds in the corner.

Once you make it back you find the last military member of your team frantically holding the door as he's sealed the attacking bots inside, unfortunately with your frightened scientist. So in you go, now with a four person strong team, wipe out the security drones, rescue Florian your head of science and loot the body of your commanding officer, because as is pointed out by the ever practical Kim, he's not going to need that stuff in space heaven. Scouring the base doesn't net you the assailants so you head out to find them. Once outside you find them as they are hightailing it with your ships stranding you on the planet with no means of escape, after one of those 'I beat you but you still got away fights' that is, and then at the end of the explanatory cut scene I hit yet another mismatched resource error and this one I couldn't fix by replacement or renaming, and reiterating the theme of honesty after doing that 6 or 7 times in the course of the game I was done. 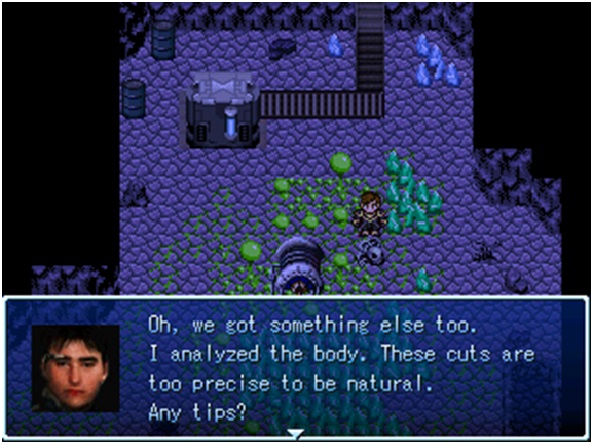 Marines, we are leaving!

There is probably a pretty fun game under all the errors and occasional coarse jokes and somewhat xenophobic overtones, but after two hours of back and forth trying to fix the errors so I could continue I'd really run out of patience to find it. There were some tantalising hints about the fate of the miners and the support crew that were once on the planet and I would have liked to see where that went, but in the end, my curiosity was overshadowed by my annoyance.

If the developer ever does come along and actually bug test to reconnect all the mismatches I will give this another go, but until then it's pretty much unplayable. Normally that would rate a 0.5 star but like I said I could see enough potential to keep trying to play it, so I bumped it up to a full star.

Edit: The developer has since updated the file and I gave it another go, there are still a few errors but nowhere in the vicinity of the number there were before. I currently do not have time to add to this review substantially but I felt it only right that I up the star rating to reflect the changes the developer has made.

So I guess you can't write any more! Which is a shame, because you were really close to passing me!
InfectionFiles

Jeeze, you're going off, nhubi!

If you want to review one of my games...really stick it to Soli...
CashmereCat

Though I suppose that does leave Unity and GameMaker and Sphere and...well quite a bit really. The RPG Maker lobbyists must have really fallen down on the job.

Close
10/27/2014 06:58 PM
Hello guys, sorry for the mismatches. I tested the game back here, and it worked, so I didn't know it crashes so badly at you.
Man thanks for your review, nhubi.
I'll do the patch ASAP.
nhubi