With a name like darkness you just knew this game wasn't meant to be all rivers of rainbows and chocolate unicorns, and it isn't. The problem is it's not particularly dark either. I means yes there is a fog of war/circle of light thing going on but the actually story isn't that high on the darker themes, or at least not high on the horror aspects of them.

The game starts with probably one of the most annoying fonts used in video games, if you're going to put up a string of text make it legible, which means please don't use Harrington. I mean avoiding the text wall in the first place is the way to go, but if you're going to have one, make it less eye watering.

So after we get the 'we're going into the haunted old murder house on a dare because we're stupid' premise, sorry because we're teenagers who've never seen a single horror moves in our lives, we get this odd game mechanic. The dev has set up the walking mechanism in this first map so that the four characters in the party move as one, but if you head off the path to investigate those ominously placed gravestones in the mansion's front yard (yes really) you can end up getting trapped by your own party and unable to move because all forward motion is blocked by the other sprites. 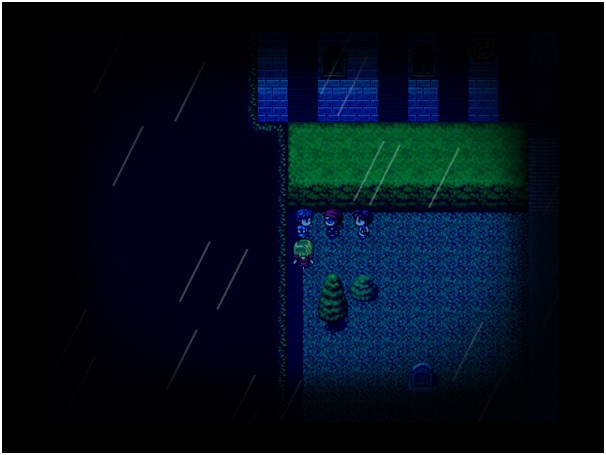 Have you never heard of personal space?

In addition because there is no save option this early you have to restart the game, which is irritating. In fact there are only ever a couple of places in the game where you can save, which means you'll be visiting the pantry quite a lot, because the other is in the room with the depressing suicide revenant which isn't somewhere you want to be.

Eventually you make your way inside the mansion, and of course immediately decide to separate from the rest of your companions and go wandering off on your own, collecting the odd key or scrap of note paper along the way. Seeing the occasional appearing and disappearing shape but not appearing too concerned even though that actually is a little creepy...and then you come across a blood splattered bedroom with a still cooling corpse splayed out across the bed, and your reaction, 'he's dead'. I'm sorry, what? This place had a series of gruesome murders 5 years past, not 5 minutes ago; there's a guy slowing cooling in a room full of congealing blood and the reaction is pretty much 'meh'. The character that had been portrayed as the one who thought it was a bad idea to come to this place given its murderous history has about as much distress as you would expect if someone forgot the ketchup for his burger.

So after that non-event you head back to the foyer and your companions to find they have disappeared, of course, so off you trot to find them. After a while you find yourself in a bedroom and get attacked by a teddy bear, it's kind of cute though I think the intent was for it to be creepy. Combat is on screen but it is very buggy, but the developer did warn of that on the gamepage, the battles are simply one shot attacks, you hit the enemy and they die, so there really isn't any strategy or indeed thought, it's hit enter and move on. In fact the lead in to each battle takes longer than the battle itself. I can see there has been some work put into the mechanic, given the fact you get messages like 'striking target when not facing reduces damage' which means combat modifiers have obviously been included, it's just frustrating that they don't work as intended. It also makes the abundant supply of health potions a little redundant. 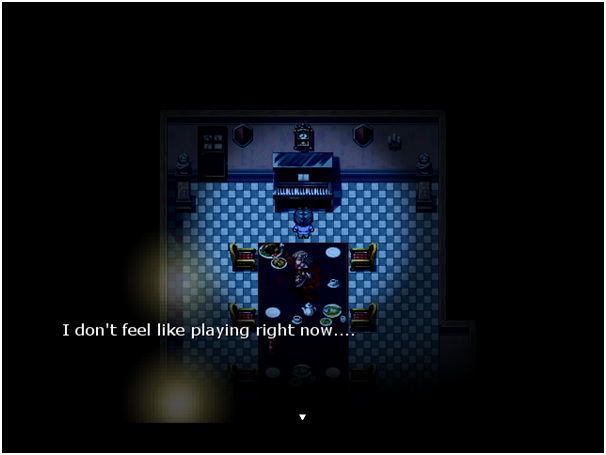 I wouldn't either with an eviscerated corpse on the dining table (the human, not the turkey).

The game revolves around a lot of backtracking as areas mysteriously become available when they were not before or you find a key or code that will allow you to progress past points that were blocked before. Along the way the bodies of some of your ill-fated companions make the occasional appearance, and once again the reaction from the protagonist is muted, almost makes me wonder if against all the heavily foreshadowed appearances the murderer is actually the player, well the player character that is.

The music was well chosen, but then again quite a bit of it is familiar to anyone who has played some of the horror games out there, but it carries the creepy vibe quite well so I can't fault it in anyway, the sound effects however could do with a bit of a tone down, the rain/thunder loop for the first map is a little jagged and not every door in the house needs to creak ominously when you open it.

There are some glaring spelling errors in the game (and don't even get me started on the abuse of ellipses) which does detract from the overall experience. This is more of shame than normal since the dev had obviously taken the time to tailor the communication to the characterisation, text speak in the messages on the phone, casual profanity in the diary entries from an inmate in the prison for example so the errors are actually more noticeable, though there are a few spelling mistakes that are unintentionally funny. 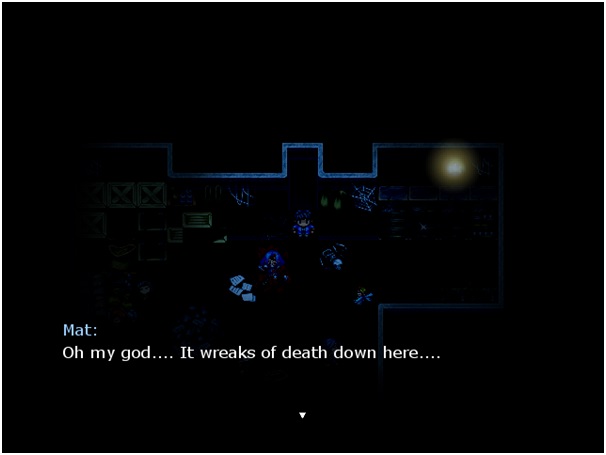 The puzzles in the game, other than just the find the key types aren't particularly challenging but they do use a few different mechanisms within the narrow confines of a note system so I appreciate the effort the developer has put into that aspect. The mapping however is pretty ordinary with a plethora of passage errors and some strange choices in the transition between maps, especially in the case of the stairwells, some require player interaction and a mini cut scene in order to move from one floor to the next, others are a simple case of moving up or down. There is no rhyme or reason to the intent placed on some stairwells as opposed to others, consistency is not the watchword here.

The game in the end is pretty much just a giant fetch quest with the occasional hacked and dismembered corpse thrown in to add a splash of viscera, and the dénouement was so heavily foreshadowed that any feeling of suspense had long since dissipated by the time you got there. The dev has patently worked on the back story for this game, and has created a world in which these characters move and interact. The problem is the imparting of that world and the execution of actions are lacking, and polish is non-existent, which means the game feels unfinished even when its story has reached its conclusion.

Horror is a hard genre to get right, so much depends on mood and atmosphere and whilst this game had some of the elements of it, none of them were showcased in any way that instilled any feeling of dread or trepidation on my part, this game could indeed have had unicorns and rainbows and it would have made little difference to the overall experience. In fact if it had, I may even have enjoyed that surreal juxtaposition more.

Close
02/19/2015 04:15 AM
and once again the reaction from the protagonist is muted, almost makes me wonder if against all the heavily foreshadowed appearances the murderer is actually the player, well the player character that is.

This made chuckle. Good review.
Pages: 1