Postcards: A Visit with Grandma

Postcards: A Visit with Grandma is short experience, but one that left an impression on me. It seems to be a memorial of sorts for the developer's grandmother, and yes, it did feel very relatable. I've had some of the same conversations with the same tone. Because of this, it was weirdly stressful to play, so I guess the writing was doing a pretty good job. 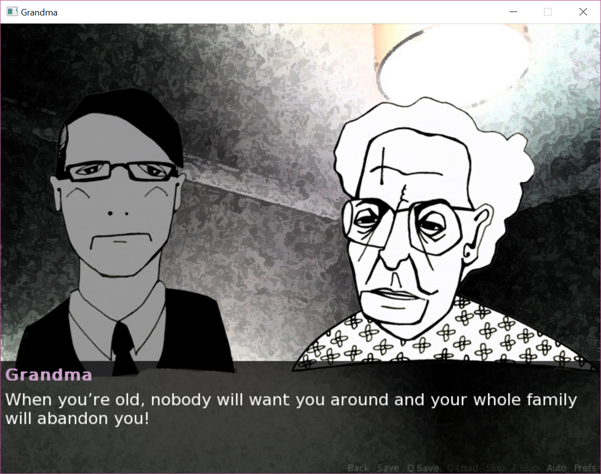 This is one of those fears with getting old, isn't it?


Although the subject itself was familiar, the presentation has this surreal haze and weird music going on. The voice acting is paired with text that advances agonizingly slow, but no worries -- you can click to display the entire text box at once, and the slow draw speed somehow added to the strange atmosphere.

Many times I'll write reviews and use the second-person "you" to refer to the player character, but it feels odd to do so in this situation. Sure, there's probably some fictional elements to the account, but despite the presentation it felt real in a way I don’t see that often in games. Sure, your interaction begins and ends with pressing a button to advance, but I’ll still consider this a game. I’m all for seeing more semi-biographical stuff like this.

In the bonus content, you even get to hear some ah, interesting recordings from the developer's actual grandmother. One of them is even quoted as part of the delightful "Buns on the Run", written and performed by TEAM PI$$.

Really, that alone should give you an idea of the tone going on here.

It's short, it's surreal, and one of the strangest memorials I've seen. Considering this was made for an event with the prompt of “Revive the Dead”, it’s certainly a creative interpretation of that idea. It got me thinking about how people live on in our memories, and I gotta say if a grandchild of mine made a weird game that involved me I’d be pretty flattered. Go ahead and give this one a try if you’re even a little bit curious!