Play in a world that hates you!

You know where you are?
You're in the jungle baby
You're gonna dieeeeeeeeeeeeee!

Zombies! Aliens!! Evil Clowns!!! Hideous beasts and mutants!!!!
We have everything that can kill you in the same game.
Well, more or less! Because this game is hard, and oddly, I like it! But let's begin with...

So, how is this plot?
Ok, the premise is simple: the world is gone to hell or better, it's hell on earth (ever played the old first-person shooter Blood? Well that's more or lesse the setting)! The story begins in a not too distant future, where everything is out to kill you: undeads, cannibals, giant apes, evil druids, witches, soldiers, aliens and so on. Oh and there are also horrible diseases too. In this terrible world you are James, an ex comedian that... well I do not know what can I say since I did not play the first episode (I was not able to find it) and the first flashbacks you will see are a bit confusing. The game starts and is for the most part a linear "on the road adventure" about escaping the dying world, buuuut don't worry, things later will change, play and you will see...

But only if you survive, that's it!

The characters are all nice and different, I liked them because of their widely different skills (see later in the combat section) and characteristica, and I loved the dialogues. It's funny, and their bickering at the same time contrasts and at the same time fits the horror scenario. Likewise the supporting cast and temporary party members are funny too (I liked especially Jordan II, that oddly is a temporary party member that you can control, but yes he's quite useless), it's a grotesque world that they populate perfectly, giving a particular stile seldom seen in a Rpgmaker game (well, Lisa the Painful, Joyful and Hopeful come to mind). 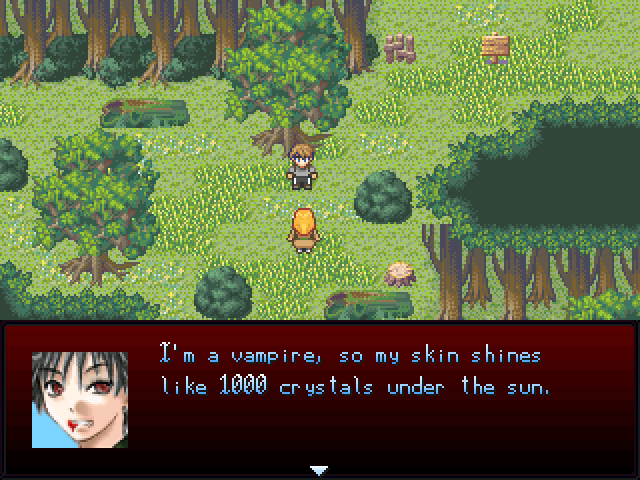 Still a better love-story than Twilight... well... maybe not!

Now, the gameplay?
This game is hard, unforgiving, and you have to spend carefully every single resource you earn in order to progress. Luckily you can save the game (almost) anytime and anywhere (not true, for example you can't in the ruins with the ghosts in the forest), and you can also earn extra supplies and hidden treasure if you look and explore every corner of the maps. Oh well you will also find maybe some extra opponent or even optional bosses, but there's always some kind of reward if you choose to do these extra tasks.

But only if you survive, that's it!

Then there are pickaxe, crowbars and ropes that are useful to unlock hidden passages when you find them. So keep those items even if they are (well just the first two, of course) mediocre weapons that you will probably use only in the beginning, before finding something better. Even better, save before using them ad sometimes these passage only lead to rooms full of dead bodies and no useful item at all. And, well watch out for exploding chests, animated aggressive chests and monsters that will pop out from the scenario suddenly and without warning (jumpscare alert!)

What about the graphics, sprites, maps and music?
Ok I said that the world is bad, terrible and trust me, it even looks like that: mapping is good, there are lots of maps and most of them are well done and full of details, some hidden treasures things and opponents,and often riddled with corpses. Yep! This game is dark and gory, and places are ugly... but in a good way I mean! Forests are dark, caves filled with toxic waste are lighted by the fluorescent liquid and so on.

Music is good, the main theme you will listen to during the travels is depressing and contribuites to the atmosphere as much as those weird noises done by monsters and opponents. I loved to hate them!

The charsets: these are for the most part the usual Rmk2003 charsets but there are also lots of edits and curstom poses. They fit the genre since this is a horror game not without humor and funny dialogues.
The monsters use the same styled charsets while in combat they for the most part use the sprites from the Megami Tensei games. They are big, ugly and scary! 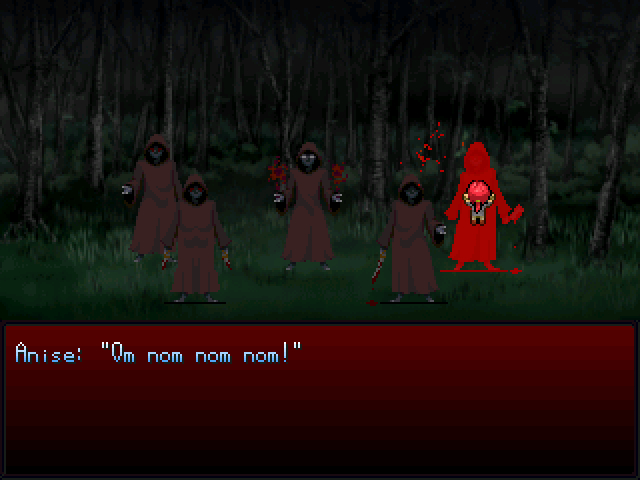 I'm not sure if I have to fear more the cultists or Anise!

Combat. Lots of it!
Let's speak about combat, then. It's the usual front-view visual (in my opinion perfect for a horror game) in which you just see the attacks of the heroes and not the attackers... except when you perform a special attack or a team attack.
Well, speaking about special and team attacks I was a lot of creativity: the character can heal himself AND at the same time increase his attack, a character can bite the enemy to drain life, another can improve the attacks of one of his allies at no cost (well except spending an action to do that, of course). Then there are some special attacks that depends from the location, for example when in the snowy territories you can also throw snowballs to the enemies! So the base idea is to use every abilities you have, finding the weaknesses of the opponents as soon as possible.
Abilities are earned during play by levelling up, and same goes with the team attacks (that works like special attacks but are performed by two characters. But do not worry, just one will spend his turn, the other will be able to act anyway).

Two more things on combat: there are no random encounters, all enemies are visible. That's the good part. The bad part is that you can't escape from combat. Never. No no no, give up and fight like a man! Since combats are sometimes unavoidable, plan well your strategy and please DO NOT go to sleep at the inn in the first town before equipping/earning some levels, trust me. On the other hand the more you fight, more levels you earn.

But only if you survive, that's it. 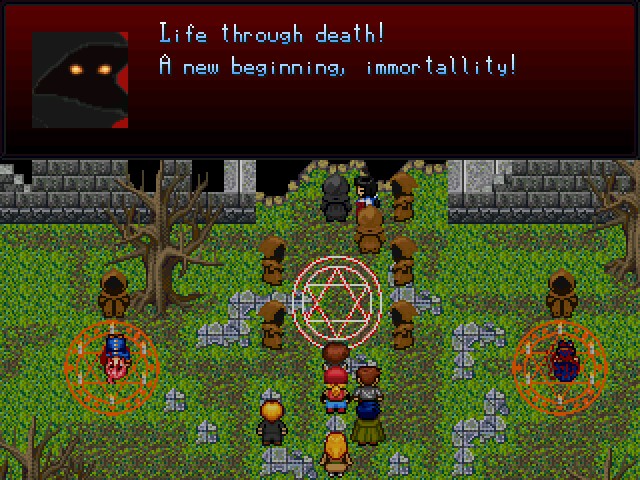 You'll be punished for your spelling errors too!

Houston, we have a problem!
Unfortunately not everything is nice and well done.
Besides the difficulty, that probably can scare some players in the beginning, we have some spelling errors (oh, those macheTTes!) during the dialogue and the absence of any warning before the boss battles (to tell the truth sometimes, not always, there is some dialogue that can be seen as a hint that a big bad will appear later), and this sometimes will let you fight unprepared.

Also there is almost no respawn of the fallen enemies, so it's effectively hard to grind when you have a nearby source of consumables and/or healing. Likewise the game is linear so you cannot go back to the safe haven (in some places you can heal for free and buy things, oh precious places!) once you left the zone (but sometimes the reason is plausible).

And, last problem: there is 2.95 Gb of music files, o downloading this game took a lot of time (and space), but it's worth it.

In the end? Blood, broken bones and candies!
I mean, this is a game that will punish you most of the time, but sometimes it will reward you. Plenty of hard rpgmaker games exists, but normally this has nothing to do with the setting, and it's just a problem of balance. Here it's not, it's done on purpouse and the story itself is about a group of survivors in a gritty world, similar to Lisa the Painful.
So?
Play it ONLY if you have time and are an hardcore player that likes challenging games, sometimes unfair and sometimes rewarding. It's not an impossible game but you have to plan, explore and look for hidden loot, talk more with once with characters as some will provide help, risk and hope to be lucky.
It's a game that needs you to try hard but it rewards the committment.

It's a game that makes you think and exploit some features, for example (here's one hint!) when you have temporary party members you can NOT use them in combat, as they will attack and use their skills automatically, BUT you can use them outside of combat (George the Knight healing skill is quite useful, for example!).

Maybe I am wrong but I guess that most people would prefer an easier difficulty level. Well I do not care, this is a unique game, well done and studied, complete with quirky characters, and a unique plot and setting.

The great final question is: did I have fun?
Yes. It's not what I expected, but I was not disturbed by the design choices or by the gore, that remains on the pixellated level. I did not expected such a big game (it's quite long, lots of fun and suffering, depending how you see it, but I would say both!).

Final judgement is 4 out of 5. Not perfect, not for everyone, but still loads of quality, details and fun packed into a labour of love that left me a lasting impression. Try it, then fight or flee, your choice!