A tale of vengeance...

Let's start the review with a funny note: in the beginning I mistakenly read "Mythic Dawn", but no, this game has nothing to to with the evil organization of the world of the Elderscrolls IV: Oblivion!
Hm ok...
I started Corfaisus' Mystic Dawn about two or three years ago, and for a simple reason I wasn't able to complete it until today! The problem is that I forgot of this game, not because it was too hard or boring, but due to a hard disk problem I lost every old Rmk game and save until I found a backup copy, so I could finish it! (Unfortunately with some other games I was not so lucky!).

The story is about Allen, a knight of the Skydwellers, a race of men that live on a magical floating city. Dolosus, a dragon, decides to destroy the citadel of the ̶S̶k̶y̶w̶a̶l̶k̶e̶r̶s̶... ehrm Skydwellers. But like the famous Elric of Melniboné, our noble hero survives the cataclysm and, last of his race, decides to find the dragon and teach him a painful lesson.
"Kill Dolosus" is Allen's mission, but he'll live a lot of adventures in the meantime. 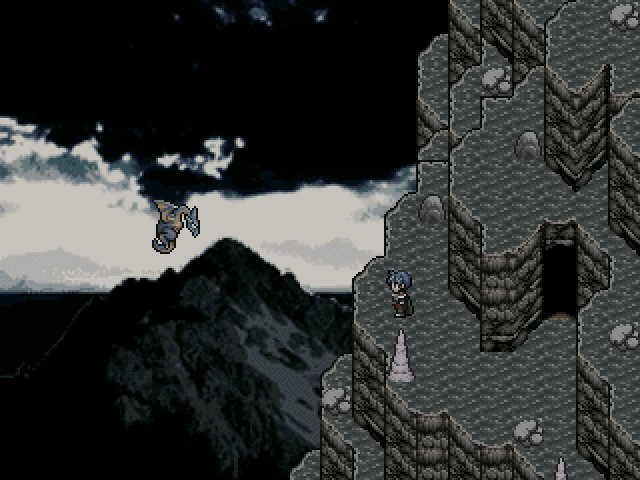 Today, in the eternal battle of man versus dragon...

Mystic Dawn is a fantasy jrpg that looks very classic thanks to the use of lots of RTP. But these are used in a really good way, in fact I found maps to be good looking and pleasant, rich of details despite the simple resources used. There are some little mistakes here and there, like some openings, doors and stairs that aren't reachable, some effective exits that are a bit hidden (see the catfolk citadel), and some large cities that are strangely uninhabited (unlike smaller villages!), anyway there is no game breaking issue. The problem is that these maps are large but empty containers that sometime have little or no purpouse (the dog citadel has shops and inns that are closed and just two dwellers, the checkpoint area has nothing that is interactive, not even the guards say anything, so it's a location that could have be removed entirely from the game!).

Ok, despite the overabundance of locked doors, the maps are really pretty also thanks to many details that enrich the setting, like, for example, humanoid races like dwarves (a rara occurrence in the Jrpg games, made peuculiar also by the fact that you have to kneel to enter their tiny houses), the dogfolk and the catfolk (that hate each other, of course!), and the mysterious oracle with her floating stones. It's a setting comes alive, there are different cities and different folks, conflicts and situations that our hero encounters by chance during his quest for vengeance.
For a while I was a bit disappointed that many situations are immediately solved, almost too quickly (like the diplomatic mission for the catfolk), but on one hand I understand that not only the aim of this game is to provide a short story, but also to focus on thhe obsession of the hero for revenge.

Combat is surprisingly enjoyable: I did not expect this since for the most part of the game you are your party, but luckily the opposition is balanced and you also soon unlock some useful skills. I found no need to grind, even if this is clearly possible in the desert (enemies are not too difficult and they leave a decent quantity of gold), you can complete the game even without the best weapons and armors, but try to get one of these powerful weapons that attack twice, that make magical attacks almost useless (so you can use your mana for healing, buffing and debuffing).
I mentioned weapons and armors, but there are consumables too, of course. I liked two things in particular: that the effects of the items is always clearly explained, and also that the prices are very low. Considering that money is scarce, this is perfectly balanced... as all things should be.

Music is from different Final Fantasy games, and it's ok, classic music for a classic game. I also liked very much the sprites used for the monsters and the choice for Allen faceset, the charsets instead are really basic RTP so there's nothing to say about them (they're ok, that's all, no particular animations or edits). 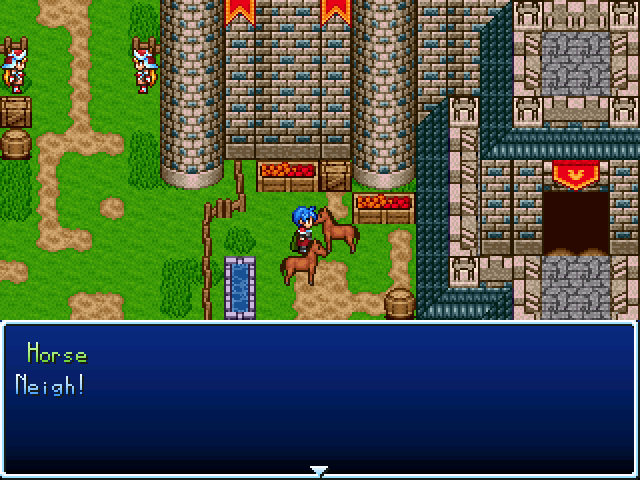 Thank you, little horse, you are far more social than those petrified soldiers!

Verdict
Ok, let's end this lost game review with what I liked and what I did not:

+ Nice graphics, pretty maps and excellent use of RTP and music.
+ Nice use of custom (I think!) drawings including the world map.
+ Entertaining and balanced gameplay not too combat heavy. You can also save anywhere.
+ No typos, dialogues are well written and straight to the point, not too long or distracting.

- The pretty maps are often uninhabited and/or have little flaws, and there is little interactivity with the surroundings.
- Linear story with almost no exploration.
- A short adventure filled with lots of events and quests that are solved too rapidly, and sometimes seem rushed.

Said this, I admit I liked the game for its simplicity and low/medium difficulty. I also enjoyed the ending, because even if there is not the sudden twist I expected it's nonenthless appropriate, mature and very dramatic.

Good job Corfaisus, I liked this game despite the little flaws (I'd have preferred less adventures and more content/exploration/dialogues). But it would have been a shame if this game would not have be completed. For me it's 3.5, short, fast and fun!