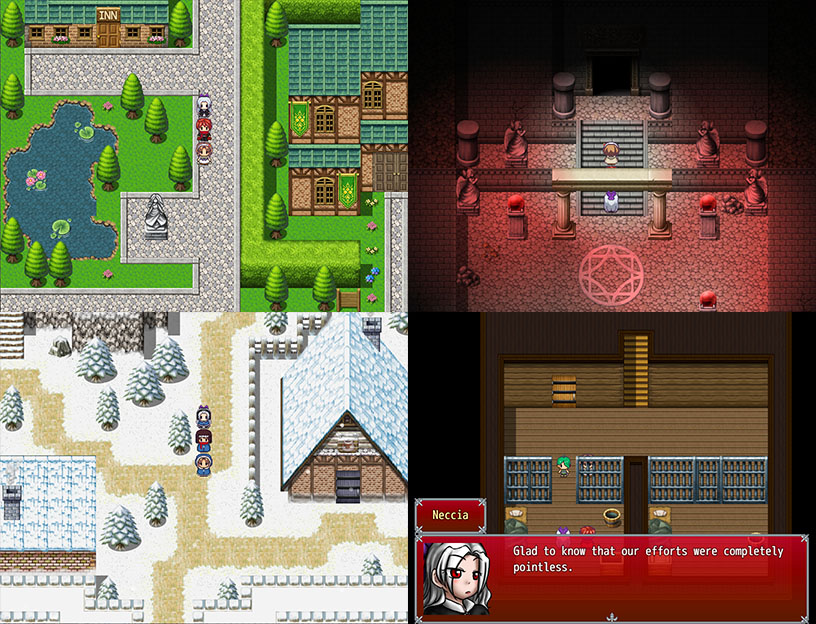 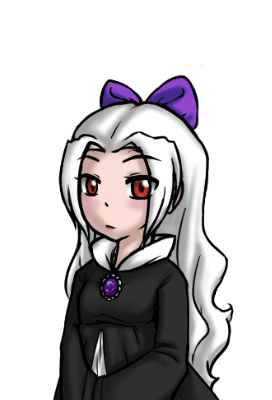 Well, that's all I can say for now without going into any spoiler territory, so I'll just end it here and go take MoE off of hiatus. :D

I just found the solution to a problem that I didn't even know I had...

I was updating screenshots and saw that the screenshots I took were smaller than my originals and weren't as crisp. They had a blurry edge to everything... but it wasn't always like that, I have the screenshots to prove it.

So at some point RPG maker updated their engine to have anti-aliasing and completely ruin the image quality of everything??? Not cool. 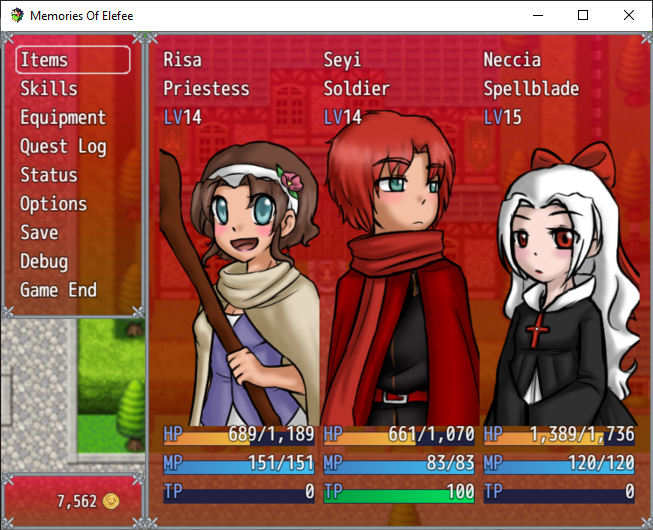 If this made anyone else very upset. I found MY solution in this forum.
https://forums.rpgmakerweb.com/index.php?threads/how-to-remove-blur.47504/

You can just add KisaiTenshi's plugin and add this to the index between </body> and </html>:
<style type="text/css"> CANVAS{image-rendering: crisp-edges;}</style>

And now I can see my artwork in beautiful, unfiltered HD~ 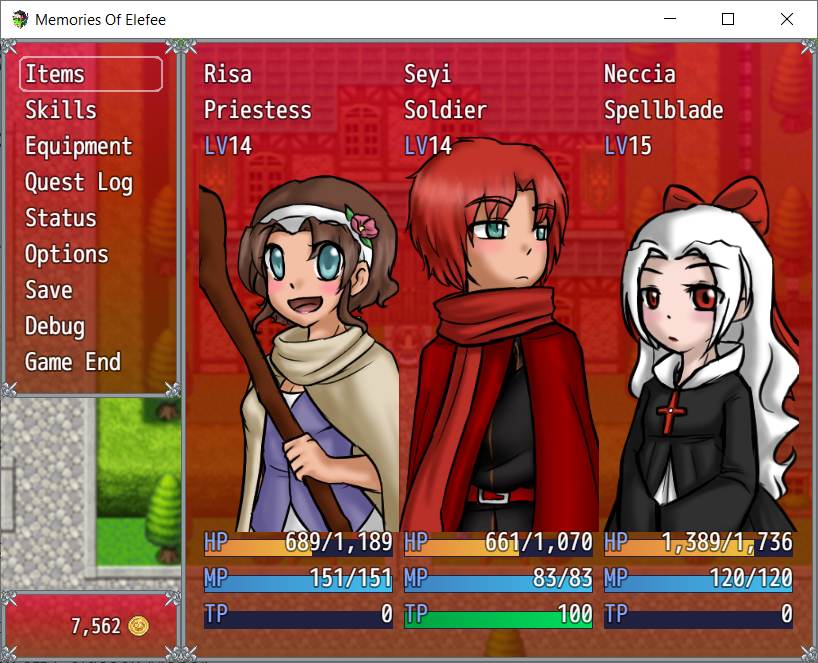 Okay, so MoE is not off of Hiatus, but i'm hoping that I can fix that within the next few months if i can just kick myself into gear.

So I had the idea to ask for a bit of suggestions from the fans who I haven't lost yet.

What do you think I could do to make MoE more FUN?

I hear a lot of you mention how much you like my characters and are intrigued by the story, but I know for a fact the gameplay is pretty generic. I'm not a scripter or anything, so there's only so much I can do. I'm also not a really a game designer so I don't know much of the fundamentals (which is why there's constant balancing issues). But I thought that while I'm at it, fixing bugs, typos and trying to continue my story... maybe I could add some things to make the experience better?

Leave any suggestions in the comments and thanks in advance.

After plenty of on and off Hiatuses over the years, I am officially putting MoE up on the shelf.
I've always thought of this game as a fun little project to work on in my free time and have invested plenty of time into it. It's not that I've become bored with it, it's more like I'm just burnt out and can't figure out how to proceed with it anymore. So I'm going to take an actual break from this game.

Maybe I'll pick it up again someday, but for now, I'm going to try some other projects that seem like fun.

Welcome to Lilia, an island paradise full of life and wonder.
Lilia, where their national animal is rabbits. National bird? Rabbits. Favorite pet? Rabbit of course. Where clothing is made of rabbits and they adorn themselves in rabbits accessories and their houses in taxidermy rabbits.
Everyone loves it on Lilia. On Lilia, you have the protection of the Almighty Rabbit who keeps you safe and cool. Here on Lilia, you are happy. Lilia is where you will stay. When you come to Lilia, you don't leave. For those people who are tired of starting from scratch. I provide you two options.
1) I added an option in new game to start from the newly added part of the game with money and experience. Just Select 'Play Lilia'.
and
2) Jelly has now set up shop in Port Town and will offer you a quick start to the game. Take it or leave it. And for anyone who's played the original VXACE version of MoE, Granny is back! This time, she's willing to listen to you ramble on about your adventures and even give you things for spending time with her. You just have to find her first! Yeah, that's right. Almost done with this part of the game. I probably could have released the demo update in a few days, but I found a little issue when I sent the game to a friend for playtesting.

It's a weird problem with the battlers. But I only noticed just now because it doesn't happen to me. Me and my friend are using the exact same deployed file and yet...

And here's my friend's.

It happens for all the animations. I can't think of a reason this would happen... I'm not a coder or anything, but you would think it would be the same if no changes have been made to the file, right?

Has this happened to anyone else and no one's told me about this? Or is this a new thing???
(it's bothering me like you wouldn't believe and yet I can't reproduce the problem!)

Progress (But not much)

Alright! I am NOT dead! I'm totally working on this game and I'm not saying that sarcastically either! This isn't really a progress report, but more of me rambling to you guys. I'm going to categorize it to maybe make it less confusing.

Current Progress
I am about 75% done with the part of directly after the demo ends. There's still a few missing elements as well as fixing to do, but once it's finished then that marks the end of the linear part of my game and I can finally move on to OPEN WORLD!
That leads on to my next point.

Releasing the game
So I have no idea how I should approach releasing this game. I mean, I could either release it when it's 100% complete or I could release it in parts which adds new areas to explore in each update.
The obvious issue with that is that it can create problems between versions. It'd be more of a play testing thing than anything probably.

The Game Page
My game page has been a thing since 2014 and I haven't done much with it. I've been wanting to update it and make it pretty for the longest time but never got around to it. I'm probably going to start trying to add things like a banner, background, and screenshots.
I should also periodically update the twitter... but don't count on consistency with that.

A Suggestion Box
My game is a weird amalgamation of ideas and concepts from friends and myself. Usually when my friends give me funny or interesting ideas, I'll find a way to fit it into my game. It usually leads to pretty entertaining results, but those who've played MoE have a pretty good idea of that already.

So I've been thinking, what if I were to add a suggestion box so that other people could throw some ideas at me too?
That's where this suggestion box comes in. You could go and drop an idea and if I like it, maybe it can be implemented into the game. It'll be a much more varied world if many people have a hand in creating it after all.
But that's just an idea. If you guys also think it's a good idea, maybe I can actually implement it somehow.

Final Thoughts
I know progress has been slow but I really want this game to be done as much as anybody. I'll keep making progress, so I hope you guys can stick with me until the game comes out some time this CENTURY :D
that's not very encouraging, is it? orz

Wooh, alright! I've been waiting for this for quite some time, but here it is! AN UPDATE!
IT'S BEEN SO LOOOONG!

I finished the MV remake of the Memories of Elefee demo. It's pretty much the same as the original demo, but the big difference is the amount of new content.

Here's my attempt at a change log, though I don't remember everything that I've added or changed~

I (OF COURSE) probably missed a few things... There may be instances of nekkid sprites or sprites that change after talking to them, or maybe other problems, but... It's playable? (hopefully. I'M at least able to reach the end) There should be a lot LESS weird errors and glitches around than in m VXAce version :D

PLEASE, inform me of any errors and I'll try to fix it as soon as I can.
Also feel free to complain about fighting or buying items. I'm not really good at balancing so critique is welcome.
As for spelling and grammar mistakes... weeeeeell..... good luck

I probably did much more art than needed for this game, but this has all just been one large art project for me and I've dragged you all along for the ride. But it's been fun for me~

You guys have probably already seen the updated sprites.

but I also updated the actor's battlers.

on the down-side. Enemy battlers have become static. This may be temporary depending on my willingness to redo all those sprites, but that'll be for another day.

Alright, I know I've been MIA for quite a while now, but I've decided to make an update.
I'll admit, I haven't been working on the game for a large part of this past few months, but progress has still been made regardless.

I know I said I didn't want to recreate the sprites, but I couldn't resist and did it anyways. I wanted to keep the DS style because it was so cute, so all my sprites are pretty much being made from scratch. That's not a bad thing, i mean, look how cute they are!

I still have quite a few sprites to go. There are some indecent people wandering around the world butt nekkid without a care in the world. 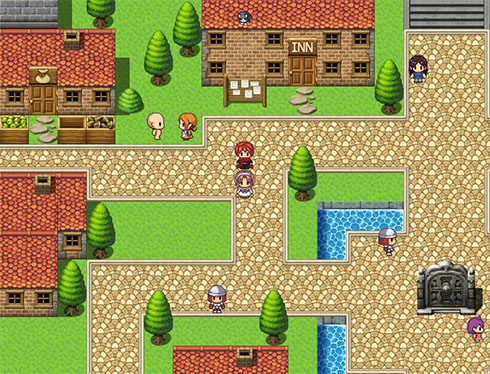 I decided to rewrite some scenes throughout the game. Quite a bit has changed, but the overall game is pretty much the same.

Also here is the sneak-peek of the final boss.

I am totally serious.

THE CURRENT DEMO IS STILL BROKEN!
I plan on uploading the last working version at some point in time.

So with the release of MV I've begun conversion of the game.
Why you may ask. Well for completely selfish reasons, really. My brother can't make time in his busy life to play on a computer but is totally up for mobile. As a good sister/ curious dabbler, I made the switch.

So, will this really change anything?
Probably not. If you guys really want, I can continue making the Ace version alongside MV. There's obviously going to be some differences between the two versions (not a higher res, ain't nobody got time to remake that many sprites and tilesets!) but you can still look forward to the game! I mean, I'm ALREADY taking forever to make updates, right?

P.S. The current download of the game is still broken.

(should probably consider a progress report at some point...)
Pages: first 12 next last