The Stoneville Mystery is a fairly short puzzle adventure game telling the tale of the son of the local priest, little Johnny, a small boy in a large house whose father has gone missing, and it is night-time, and there is a storm raging outside. Atmospheric enough for you yet?

The mystery is on the surface just where Johnny's father has gone, but of course if that's all it was the game wouldn't be very long. The real mystery is why did he feel compelled to leave his young son alone in the house in the middle of a storm ravaged night? 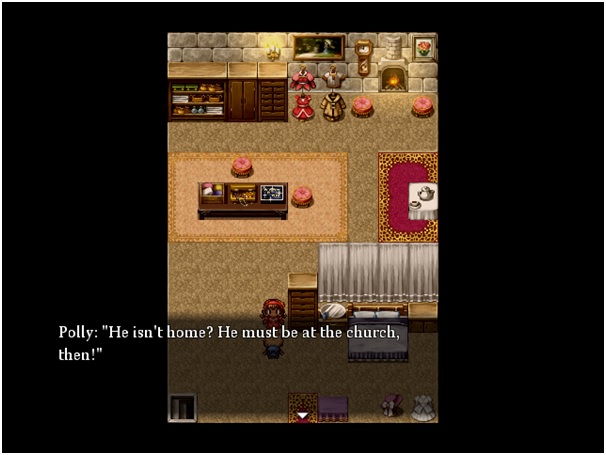 Problem solved, game over. Back to bed for you, young man.

The game is listed as a RPG first but it really isn't, it's primarily puzzle based, and the find one item to lead you to the next type of puzzle rather than a push this boulder to get it out of your way, (though there is a version of that too, albeit with barrels not boulders). The puzzles aren't particularly challenging, and take little or no work to deduce the next required step which is a bit of a disappointment. I never felt like I had to take more than a moment to work out what to do next, but there is a simplistic pleasure in just going with the flow and this game did allow that, so if you like your puzzles simple then this part of the game will probably appeal to you more than it did to me. However the kill the skeleton with the spikes puzzle did take a second attempt and it was a bit of fun.

The game is stated as being linear and it is it, very much so, there are no blind alleys or misplaced clues to find, everything follows logically on from what comes before and pretty much foreshadows what is to come, so as far as story progression goes, what little there is of it, not much is left to interpretation. Even the little 'side-quests' are simply a way to enable Johnny to earn enough coins to buy the key he needs to progress further in the game, though there must be someone wandering around town with deep pockets with a hole in them since there is quite a bit of coinage in random places on the town map.

Almost all of the music used is from Gyrowolf's music pack, but since that is a pretty interesting selection, I quite enjoyed listening to them, though I must admit the title music was a little too martial and strident in later sections but you don't spend a lot of time on the title screen so it's not that much of an issue. The sound effects however are quite a bit over the top, or at the very least set too loud, the ticking clock, the pounding rain, the strange thunder rolls are all a little too much. To the point they become almost white noise in the background, which is not the effect I imagine the developer was intending. 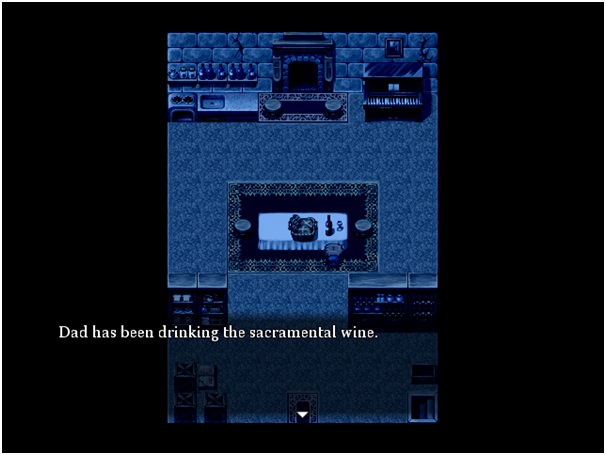 Johnny's house in the town of Stoneville has a very bizarre design element, it is built upside down. All of the living areas are on the ground floor as you enter the house, but the bedrooms are in the basement in what amounts to being a damp windowless box, it's not very healthy. Though it does seem to be a bit of a design feature in the town, of the five buildings available, only one actually uses its basement as a basement, the others all employ them as either bedrooms or places to hold assorted evil forest spirits, and somewhat surprisingly that's under the church.

There are some glitches in the delivery of in-game instructions in that they aren't set to play once but are triggered every time you step on a particular tile, one that can't be avoided, so if you revisit a building you get the same instructions multiple times.

One area the game does show some innovation and great attention to detail are the little hand drawn stills for the opening and closing cut scenes and the interactive nature of just about every item in the game, most give a small banal dialogue response, 'the fire is warm', 'this is a pink dress' sort of thing, but some enable the acquisition of useful items, or a continuation of a running gag. In regard to the items there is no wastage in this game, as there are none you find that you don't actually need, and whilst I do appreciate the minimalist attitude that embodies it does tie in to the overly simplistic progression of the story. No misdirection or red herrings; just get this, go there, do that.

For a game whose primary indicator is puzzle, the puzzles aren't actually challenging in any measurable way. In addition whilst obviously in the 'slice of life' genre, the historical reasons for the conflict feel like an add-on, simply dropped in at the end without any appropriate back story to try and neatly put a bow on the game. Johnny's predicament is actually quite charming and has some scope for a few heart-rending scenes, but the developer missed the opportunity to exploit them, which is a shame.

However if you are willing to overlook a fairly obvious logical flaw in story progression you may enjoy the 30 minutes a quick play through of this game takes, but if you are looking for something with a bit of a challenge in your puzzle games, this probably isn't the one for you.

"Martial" and "strident" seem like such gorgeous and juicy adjectives. For those who can't give half a hoot googling their definitions, martial means "relating to fighting or war" and strident means "loud and harsh; grating". So basically those parts of the song were military, soldierly, harsh, raucous, rough, grating, rasping, jarring, loud, stentorian, shrill, screeching, ear-piercing segments. They say that the more that you know... something something.

author=nhubi
The sound effects however are quite a bit over the top, or at the very least set too loud, the ticking clock, the pounding rain, the strange thunder rolls are all a little too much

UGH that is so easy a trap to fall into, having such loud cacophonous SE's. I don't know about everyone else, but I find it really hard to really find out a good audio balance for my games, and I mix and master songs in my spare time (just occasionally, while I'm stirring my hot chocolate and cover myself in a feather blanket).

author=nhubi
One area the game does show some innovation and great attention to detail are the little hand drawn stills for the opening and closing cut scenes and the interactive nature of just about every item in the game, most give a small banal dialogue response, 'the fire is warm', 'this is a pink dress' sort of thing, but some enable the acquisition of useful items, or a continuation of a running gag.

Interesting. I've been perusing lately about how much things you need to become interactable in a game. Is it all, or none? It's a balance, I guess. Sometimes reviewers complain that nothing that even though you can interact with a lot of things, nothing is useful. Maybe I have to download this game to find out why that aspect works. Unless you can recommend me one that does the whole item-interaction thing better (I bet there are some).

Is this related to a spoilerific incident, or is it just related to the concept? I'm interested to hear what's the flaw. Maybe I'll play the game and ask you what you thought the flaw was. I'm legitimately curious.

Well-written review, nhubi, however I wouldn't expect much less. You at least have an ability to captivate this reader. Well done.
nhubi

In regard to the interactive nature of objects within games, I am a bit of a exploration type, I like checking out pots and drawers, cupboards and bookshelves. However there needs to be some overarching system in place, either it is everything gives you a response, and by everything I mean those things that you might expect to get an items from, or some form of story progression. So finding a useful book on a bookshelf makes sense, finding a long lost ring that proves the identity of the lost princess down the kitchen sink probably doesn't, but that's in the all side of the spectrum, I'm also happy with the nothing version too because after I go bumping into walls and checking out every available object in the first town/dungeon I'll stop looking because I assume the dev is using the obvious items like chests to indicate something to be found. The best way I think if you want to add a little to the exploration but don't want to spend a lot of time creating interactions with every object is to have a pattern. So you make it so there will be an item hidden in one of the bedrooms in the inn. It happens in every inn, but it's not always the same bedroom and it's not always hidden in the same spot, but as a player I know to check out the bedrooms in the inn until I find it and then I don't have to search anymore.

I do think it's a good way to add story flavour or progression however. Remarking on the quality of a set of armour hanging in the armourer's shop, or the range of potions and salves in the witch's cabin, nothing too onerous but that adds to the immersion factor. What doesn't work so well is the 'this pot is empty' message every time, it becomes tedious to action button your way through them, if there's something in the pot give it, if there isn't don't remark on it, unless it is a running gag. Something like Arvale's talking with wheelbarrows.

Oh the flaw isn't spoilerific, it's quite simply there is no logical reason for Johnny to leave the village in search of his father. He's very young and is quite comfortable questioning authority figures as to his father's possible whereabouts but once he ascertains that he is not in fact in the church or anywhere else in the village it makes no sense for him to strike out on his own in the dark into the wild and dangerous forest around his home village, especially when there is an armed guard stationed at the village gates and all of the adults in the village are awake and around. The story needed him to do it, but didn't provide a reason why he wouldn't continue with his established method of talking to adults and asking for their help. It's out of what little character he has. If the dev had included a sequence where he did bring it to the attention of the adults and was basically patted on the head and told to go back to bed and his father would turn up eventually and then he had to sneak out of the village to find him, it would have made sense, but as the game currently stands the guard moves out his way and lets him go off on his own without batting an eye.
CashmereCat

Close
11/22/2014 05:29 PM
I'm a bit of an exploration type too. But sometimes I don't like it when there's so many things you can interact with. I'm not made of patience, boy! That was me talking to the dev. Patterns are good to make sure you know what's what.

So you think that having a detailed description of every item would be good? Or too heady?

Yeah, it is a bit weird that the kid would go out into the wild like that.
Pages: 1