Ten thousand ways to DIE... at The Witch's House!

Hello, and welcome to a real horror adventure!
Yes, my last review was about a dark, mystery game, but with The Witch's House we enter the realm of true creepy horror! This game is a 2012 (even if the release date appears to be 03/17/1800!!!! No, that is too much) japanese game made by Fummy with RPG Maker VX, called originally 魔女の家 Majo no I, and later translated into english, spanish, german and italian.
But let's start with the plot of the game:

First, there is not a lot of backstory: our protagonist is Viola, and she is alone, lost in a forest. And the only way to go is through an old and creepy abandoned mansion... uhm I'm already worried about how things will turn out, but hey, there is no choice here! Luckily there is a black cat... that's not a normal cat, but a sort of Cheshire Cat for our new Alice in Wonderland! The cat serves both as a save point and helper, giving hints on how to progress into the house. 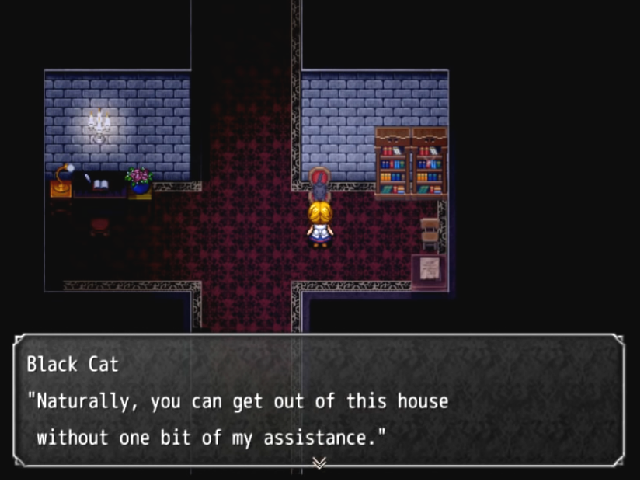 Well, I like a lot cats, but you look a bit suspicious to me. And I swear, not because you are black!

The goal is escaping, of course, but this will be possible only by solving puzzles, collecting and using items, and unlocking doors. During this adventure we will meet a lot of weird beings, but in the end only four people are really involved in the story: Viola, the Black Cat, Ellen and Viola's Father. The last two will have their spotlight moment towards the ending... eh and what ending! I won't tell you, but while during the adventure you will get bits of the story, the ending will be really mindblowing! Trust me, but don't expect I'll tell more about this!

First you will have to solve the puzzles that start really easy and becomes more and more difficult as you progress. Sometisme you have to figure out for example how to clean a pair of shoes or how to unlock a particular passage, anyway if you have any difficulty you can easily find a walkthrough for this game! Because the game is an adventure about exploring, finding items, placing them where it is needed and solving other tasks, not unlike many other horror adventure games, so light in story and dialogues and big in exploration and scares. 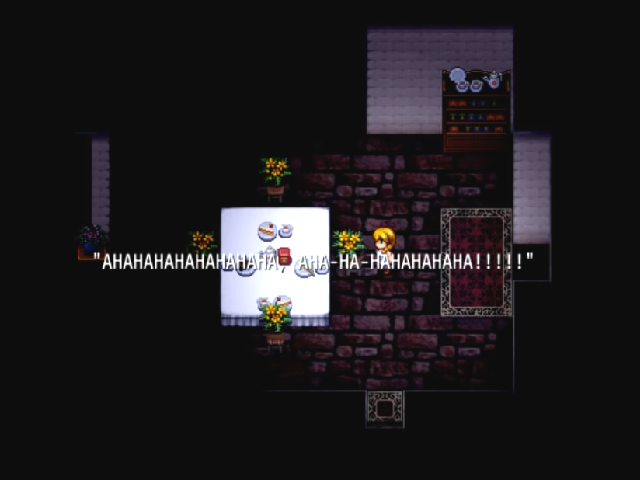 Ohhhhh so funny... laughing plants! Well no. Not funny at all!

Creepy scenes and dangerous situations abound, so the situation is tense: for example I remember reading a book about a dark humorous story... and one of the chairs started laughing! But there aren't just harmless scares, there are also one houndred ways to die inside that cursed mansion! And yeah some parts, especially a particular and classic horror chase scene, are quite hard (and in some parts it's a bit of trial-and-error, love or hate it!), but yes, this is a survival horror so good luck on surviving!

Graphically the game uses RTPs (even if the faceset of Viola seems original to me, but yeah it's an exception!)... yes, old classic RPG Maker VX RTPs, even if I'm aware that in 2018 a new version was released on Steam, The Witch's House MV that includes different graphics and also a difficulty selection (easy, medium and hard), but this review is about the Rmk Vx game so I won't discuss it!
The game centers on the mansion, so expect the maps to be 99% about the various rooms and locations related to it, and these are pretty much well done, detailed and furnished and there are no overly spacious locations or map errors that I remember. It may look liks nothing special due to the non-custom graphics, still it has a real special atmosphere, thanks to the good use of visual effects like lightning and fog, that together with a clever use of sounds make the game stand out. 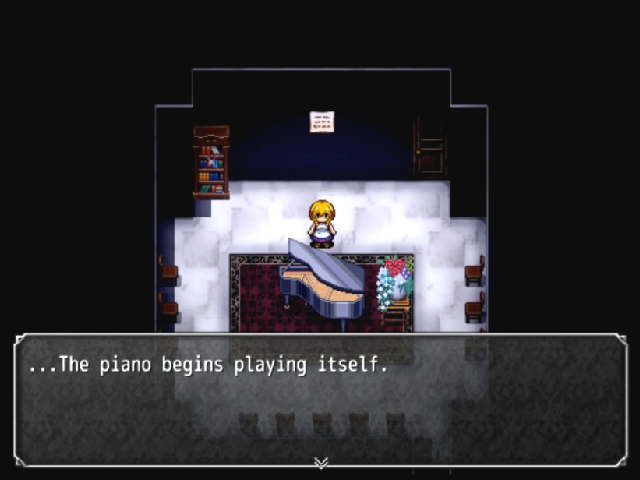 And it plays "Requiem for a Review" so let's skip to the...

Final Verdict
The Witch's House is a classic horror game, but if you have never heard of it, I suggest you to try it! It's widely considered a good game, and while it may be overlooked for its average and not original graphics, it's still a popular (I mean, it was translated in various languages, it was re-made and improved, and there are so many walkthroughts of the game easily available that I was shocked by the lack of reviews of this classic!) and enjoyable survival horror puzzle game! Worth playing it, really!