This game is averred as being tongue-in-cheek and that is a very apt description, it's whimsical and funny, I'd say it was irreverent but this is Star Wars so it's not actually something that gets the reverential treatment (other than by squeeing fanboys and -girls), saying that I do have to qualify and state that if you aren't a fan of the universe you won't get most of the jokes, but then again if you didn't at least have passing interest you probably wouldn't have opened the game. Seriously though if you're not quietly giggling to yourself as the opening credits roll then I think you have the wrong game and you should just F12 and go play something else. 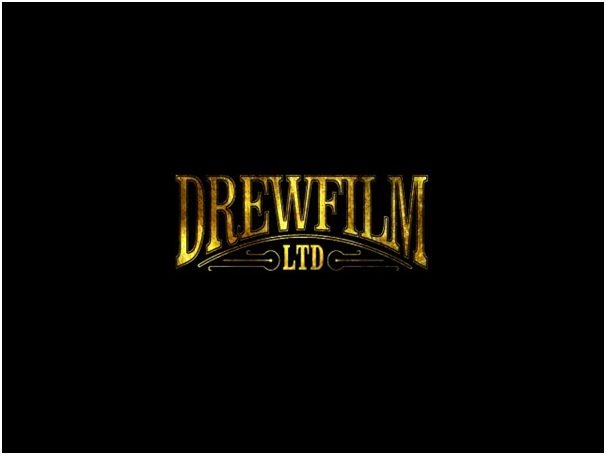 Ok we're in for a ride now.

Drew has co-opted all the classic Star Wars imagery in this opening cut scene, the drewfilm logo above, the canary yellow perspective reducing text, the slow panning shot down to the planet below. I was really looking forward to seeing the mile long destroyer hove into view, but I think the budget didn't stretch that far, so we then shift gears from the macro to the micro, to 'The Kid' living on a moisture farm in the middle of Tatooine and kvetching about his work load and his step-dad Steve who is the worst step-dad ever. Now this is a little worrying since one of the features that drew me to this game was the less whiny than Skywalker selling point, I'm hoping this current petulance is short lived because otherwise I'm going to leave the theatre and ask for my money back...oh, wait.

So that the game is liberally peppered with Star Wars references is to be expected, the first being the cinematographic opening and then of course the well known music, it's not easy to get that wrong and luckily Drew doesn't, he's chosen his themes well, but then again he is following step by step in the shadow of John Williams so it's hard to put a foot wrong.

The first quest is to go and buy a part from the local Jawas to fix a broken moisture collector (yes that old one) and the Jawas do you a deal, luckily it appears speaking in basic rather than Jawaese, head into a nearby canyon and pick up some useful scavenge that they dropped whilst running from the Sand People who infest the canyon and they won;t charge you for the part you need. So with your handy blaster you head off and run into your first battle. It's the standard turn based with a little battle priority script in the corner and a HP indicator for the enemies, so there is nothing particularly unusual there, what is unusual doesn't kick in until after the battle. You don't get any experience, just credits. A quick peruse of the status option in the menu shows no indication of levels either.

So there has to be another mechanism for growth. There is but it doesn't come into play until later.

This is actually a pretty good thing because it gives you a reason to avoid battles. There are some you simply can't but with a little bit of fast finger work around the on-screen enemies and a bit of a speed rush through areas to deal with the random ones you can make it through most of the game without a lot of fights. The reason that's a good thing is that the battles are very tedious. They are a simple button mash as each character with the exception of the kid only has one attack available so the choice is shoot or use a healing item. There is no strategy, no tactics nothing really other than hit things until they fall down and heal if you need to, which is actually pretty rare.

In addition at the beginning The Kid has one skill called Rest which is an out of battle use only spell which basically heals all damage taken by the party and costs nothing to use, as you have no MP or equivalent. So basically the game is set up that if you survive a battle you can heal up to full immediately by resting. As useful as it is, it doesn't help whilst you are in the midst of combat, but that's what medpacks are for.

This dearth of skills is alleviated somewhat halfway through the game when the growth mechanism kicks in, but it's a one-time only event and apart from that boost you go through the game with the same stats as you started. Chosen One you most definitely are not.

The graphics in this game are all custom and they blend seamlessly into each other, given that they were taken from a few sources and modified either lightly or heavily depending on need this is quite an achievement, because they look like they were designed to all work together. The atmosphere of Tatooine is arid and windswept with sand the right shade of ruddy, though I must admit I did get kind of sick of seeing it after the third pass through the wastes to visit the Jawas, the swamps of Dagobah are dank and foetid and you can almost feel the moisture dripping down your neck from the overhanging Spanish moss equivalent, though more trees probably would have helped as the swamp is a little sparser than I remember.

So after a brief trip back home to fix the vaporator and notice that your mother and step dad aren't around you head off to a meeting with the crazy old man of the desert, Obi Wan Ben Kenobi who gives you a quick primer on the force and the current rebel/empire war and then gives you your very own lightsaber. 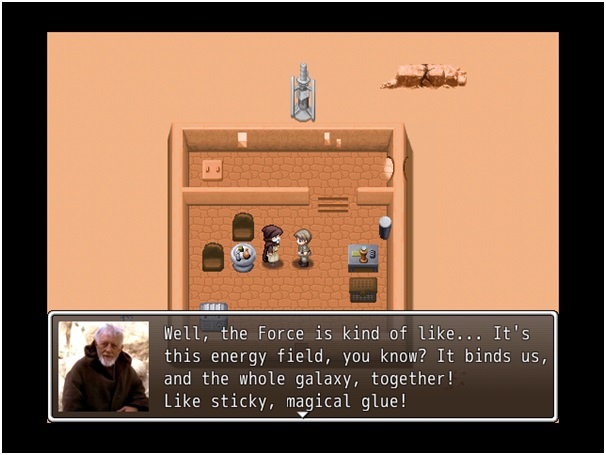 It's no 'luminous beings are we' but it'll do.

It's not a blue one, he's saving that for the 'son of a friend' but a spiffy yellow one, which is a nice in-game nod to the original Kenner action figure of Luke, but of course at this stage you are more likely to cut off your own appendages if you try to wield it so it's back to the trusty blaster for another trip through the desert canyon and then back to the moisture farm to catch up with the you Mum and Step-Father...and well we all know how well that is going to go down...except no that's Luke's story.

The Kid's Mum is fine and his step-dad is sleeping off the strain if the day so she takes the opportunity to suddenly tell him all about his force-strong but untrained Jedi father who lived a life of smuggling rather than the dangerous one of a Jedi, and that's saying something about the universe when being a smuggler is a safe profession. So armed with this knowledge, a serious pay-day of credits from his father's less than salubrious lifestyle and his trusty speeder he heads off to Mos Eisley (after the obligatory staring at the twin sunset moment) to see if he can track down his old man who went missing 12 years earlier on a run. A quick pop into the cantina and a negotiation with a scruffy looking nerf herder and the kid and his speeder are ready to hit the space-lanes, but of course this is where the true story begins, because whilst he was engaged in negotiations a couple of unsavoury types stole his speeder. 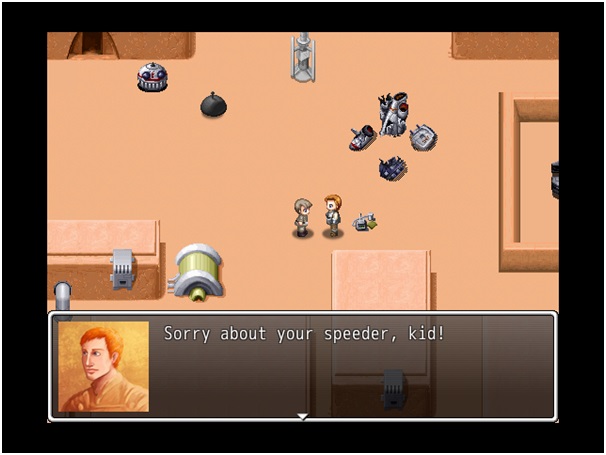 Give me back my 100 credit parking fee, you jerk.

So the quest becomes a double header, find your father and find your speeder, it's a bit of a toss up as to which is actually more important to the kid. So after a flyby of the Sarlacc and a visit to a remarkably amiable Jabba at his palace, and incidentally picking up a droid companion, because no Star Wars game would be complete without one, the kid finally leaves the gritty world of Tatooine behind and heads of in search of his speeder...and dad.

Along the way he gets to visit some well known and less well known worlds, and run into some characters that will be fairly familiar to anyone who has seen the movies, and a few that are less so unless your familiarity with the Star Wars universe also encompasses the spin off media such as cartoons and games. Some of the cameos are hysterical, mostly because the characters are portrayed in a way that does not reflect their commonly perceived persona's. Characters whom are normally taciturn are suddenly garrulous, ones who are inseparable are seen as combative and jealous, Jabba in this game is generous and jovial, not malicious and leering though he does still have dancing slave girls, Dominic Raynor still has his malevolent streak but chooses to try and enact his revenge via mad hatter schemes rather than the sensible route of bounty hunters, and Yoda, well you can't really make Yoda a parody of himself since he's already is one so Yoda is Yoda.

There is a small glitch at around the halfway point, when your weapon of choice changes you also seem to lose your clothing. Not the sprite, it's still fully clothed but in your equipment screen the moisture farmer's clothes you've been walking around in since this adventure started are suddenly gone. However as you have been walking around in them through deserts and ice planets and swamps without a shower or change maybe they just decided to walk off on their own. 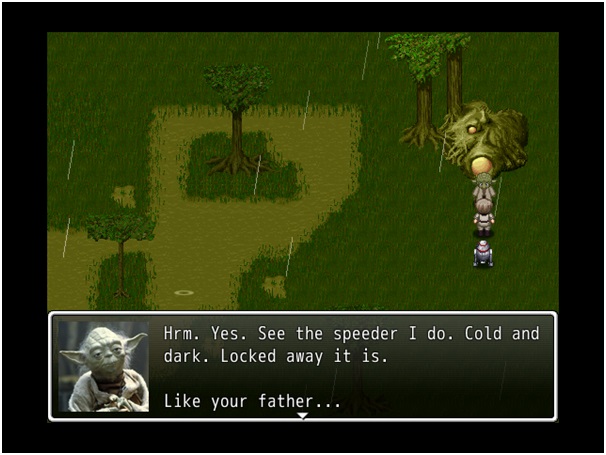 
Still in the end the good guys win, I'm sorry was that in any doubt, it is Star Wars after all, and the Kid gets back his speeder and as a bonus his father, and manages to ruin the Emperor's day. All in all a pretty good result I believe. The final flyby of the Kid in his later years is a nice touch and steps you from the established mythology into the beginning of A New Hope, and did make me smile. This isn't a game for everyone, and indeed I believe the simple nostalgia of it helped my enjoyment, but if you feel like playing a game that pokes fun at the franchise but from the viewpoint of a fan, then I'd say give it a go. Just remember that the battles really are very boring and not even remotely necessary to finish the game.

If I do have to add just one more note of thanks for the fun I had playing this game, it is that there wasn't a Jar Jar Binks to be seen anywhere, not even a parody of one. It's appreciated.