So you wanna be a Vampire Hunter???

Hello!
Castlevania is a series about vampires and vampire hunters, but you probably already know this! But Castlevania NKN is a 2014 fangame (that was originated by a mock up screen of the game made with Photoshop) and parody with little connection with the other games and stars a new vampire hunter named Marsello (that is also half demon or something... even if he does not believe in these things!): this guy isn't your typical monster hunter (since heroes in the Castlevania series fight a lot of different monsters, not just vampires!), he's rather inexperienced and skeptical, but he's nonenthless tasked to kill the vampire in the castle at the top of a nearby hill. After all these bloodsucker appears only once every 100 years, so... someone should put them to rest!

Yeah this is the story, but even if this game draws inspiration from early Castlevanias for its setting, more as a typical adventure game, but parodying or satirizing the games, so expect many humorous dialogues. Oh and it's available both in english and spanish. 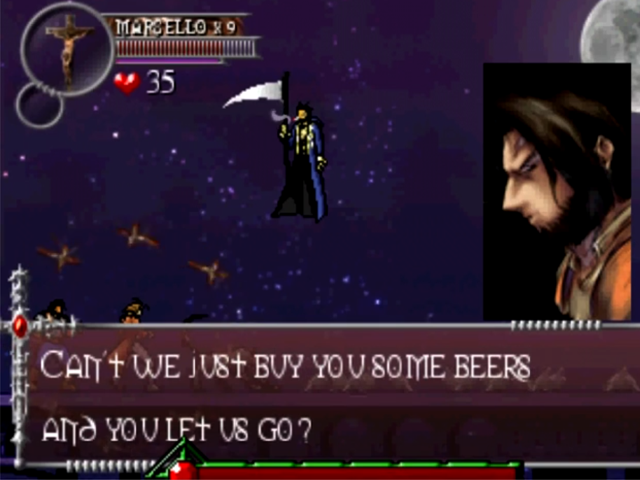 Well it was worth trying!

There are three difficulty settings, Easy, Normal and Hard.As I expected the game is quite challenging even in normal difficulty, but not too difficult and clearly beatable with enough practice.
What can you expect from this game? Well the usual Castlevania gameplay, of course: nine levels of 2D side view platform and combat sections, monsters and boss fights. Marsello fights with a whip (but of course,, like his predecessors), some classic all classic sub-weapons (dagger, holy water, axe, stopwatch, cross) and the power of elemental magic (fire, earth, wind, lightning, holy).

But this is not all! Unlike the heroes of Castlevania that are generally loners, our Marsello is joined in his quest by a couple of quirky characters, Schubert the Shopkeep and Aaron the Werewolf-rat. Uhm ok, don't expect them to do the fighting, as they just provide some sort of support (ok they are somewhat useful sometimes, but I guess their presence is more to justify some dialogue exchanges between them and Marsello).

Game plays like a Castlevania: Rondo of Blood/Dracula X game, with one whip attack direction, sub weapons and item-crash. As mentioned before it also has a magic system and a shop, but what it really make it stand out are probably the original original sprite graphics and story. There is also a series of gags (like the use of typical Metal Gear Solid "surprise" sound effect!) but for the most part this is a typical Castlevania action games, fast and furious, in which you have to hit beasts with the whip and other implements.

The setting is very well made, even if not overly original (fighting undeads and walking armors in a gothic castle, dark forest or catcombs...) but it's exactly what you can expect from a classic Castlevania adventure!
Extras of this game includes a boss rush mode, a bestiary and a gallery of the artworks used in the game. 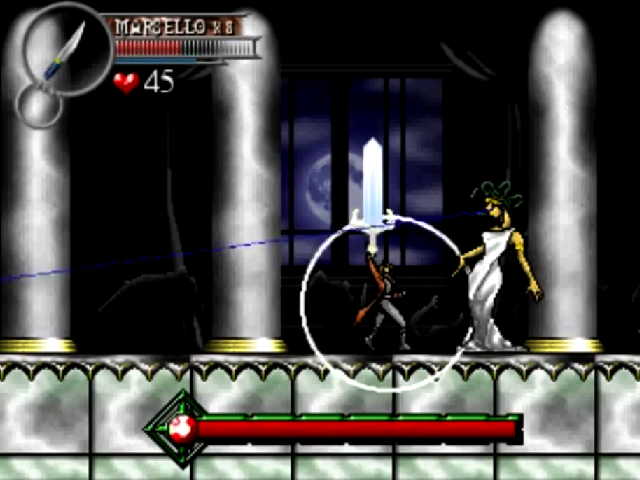 By the Power of Greyskull!

Final Verdict
Castlevania NKN is a pretty fun fangame, it's a pity that I discovered it only recently. I'm not fond of the control setup (I prefer the Openbor Silver Night's Crusaders but because I'm more used to playing with that engine, even if that game is quite more difficult compared to this one!) but I guess it takes some time to ger accostumed to it, anyway if you have problem with the game difficulty you can choose the easy difficulty and it's done...
Well, maybe!
Because enemies have lots of hp and I'm talking about normal difficulty! Also pay attention to the Medusa that can mean instant death in some occasions, and that's a pretty bad situation. Anyway I guess that these are features purpousely made and not an error or a problem of balancing the game, I mean, it's still a parody. On the other hand there are lots of weapons and powerful magic, the main character has also a good hp bar, so for the most part the game is balanced and not excessively hard for the most part except for the situations indicated above (even if I absolutely hated the evil black blobs that disappear on the dark background and are almost impossible to see and rather fast!).

Graphics are really good and the game is frenetic and fun to play. The difficulty selection also makes it easily approachable also from those who are not hardcore gamers, still keeping it challenging. There are just a couple of typos or errors in some of the dialogues, but the exchanges were fun nonenthless and clearly this is not a game you play to read a story!

So, this get 4.5/5, it's a good game, well made, and inspired. Custom graphics are excellent. I had fun! And the ending is great!