I still need to figure out how to make the braver.

Close
12/20/2014 04:37 AM
I'll assume you're going to be changing that Windowskin soon to something not taken directly from FFD. I'm not sure why you haven't done so already, since I already made it clear that I don't want the Windowskins I created to be used.
jin69

Close
12/20/2014 04:49 AM
See, if you're going to lie about it, then we have a problem. Don't use anything from FFD. I know for a fact it's the one I made, since I kept the same highlighted area on all of the windowskins I made (the rectangle area with the blue outline that shows when you're selecting something).

Close
12/20/2014 04:54 AM
You didn't even bother changing the font settings from the script code you lifted from FFD, and have already posted script code with FFD character name references in them (I guess you got that somewhere else too?).

Do us all a favor, take two seconds to ask for permission to use other people's stuff, if it's not stated that it's free to use. It literally takes two seconds. Don't be a thief, nobody likes that and it's very easy for creators to prove that you're stealing their things.
jin69

Can you refresh my memory where I was lying? Sorry, I failed to recognize it.
jin69

Close
12/20/2014 05:03 AM
Next time don't sound like a total jackass as if you created the final fantasy franchise. I have respect for you, let's keep it at that. I am using the scripts you made, and you even mailed me an updated version. I did look at FFD for reference on how to use VE scripts. So chill the F out. Your crappy windowskin is the bottom one and, the other one is from somewhere else. You're not the one who created the blue text box, SQAURE ENIX did, don't refer to me as a thief, thanks.
WCouillard

Close
12/20/2014 05:15 AM
Alright, so let's play it this way. I'll send the actual PSD files, with each LAYER, of every window skin I made to the admins here, and you can kiss your game page goodbye since you refuse to do the honorable thing and ask to use things. On top of that, you go ahead and lie about it. Tell me, where is the "somewhere else" you took my my resources from? I'd love to know.

Like I said before, none of the windowskins I made are rips. I recreated them by hand. You're using a font I made, too. Didn't complain about that. I publicly released it and granted permission for it to be used.

I sent you the link to a PUBLIC script that I released that anyone can use. I didn't say "use any line of code" from my project. So don't cop an attitude and tell anyone to chill out when you're stealing code, resources and movie files from other people without so much as a heads-up to those creators. You already had to remove something from your page for blatant theft. You're wrong, end of story.
jin69

Close
12/20/2014 05:38 AM
What is wrong with YOU? I made several windowskins, that have been shown in FFD screenshots for the last two years and then some. The one you're posting here to "disprove" that you stole anything is ALSO mine and is the FF7 style windowskin I made, not the FF6/FF9 one you stole and poorly mashed up to use in your project.

Here is ONE example of the original work. If you want me to post the others (like the poorly mish-mashed FF9 window border you took from the other windowskin, I'll be happy to post those, too. 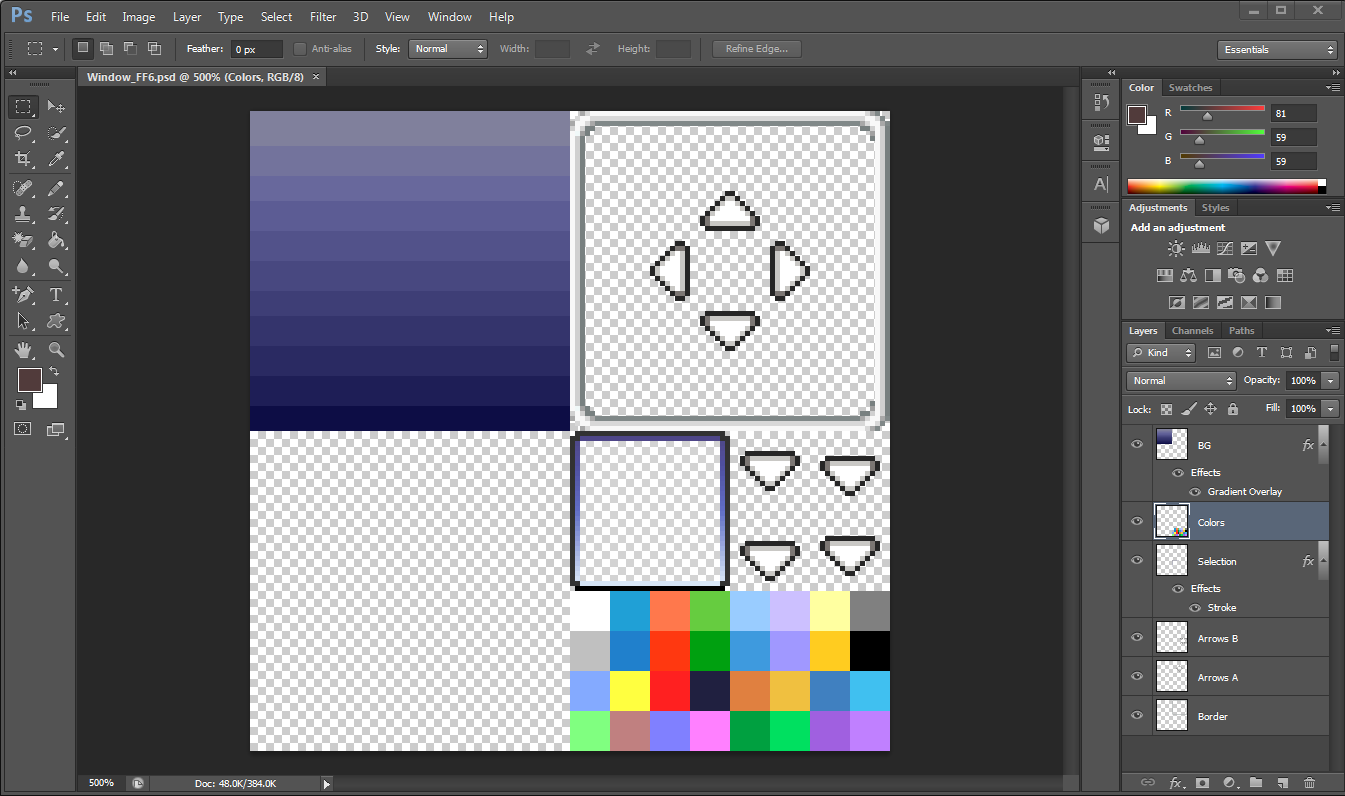 Quit while you're ahead. Either make your own resources, use what's publicly available, OR ASK PERMISSION. It's not hard.

Here's an example of the FF7 Windowskin,

And an example of the FF9 one I made (boy, that border sure does look familiar, doesn't it?)

Now, here's the icing on the cake! Look, every file in the Graphics/System/ folder of the FF Disovery Lite Demo!

Close
12/20/2014 06:06 AM
Man you're crazy, hahahaha. The windowskin I'm using I got it from someone else, not FFD. Anyways check this out... did you ask Square Enix permission to use their sound effects? How about their music? Oh, Character names? No. No. And no. You should be sued, I should be sued, and everyone else who has ever used FF stuff, or is doing it should be sued. Stop acting like a nut job, or some kind of detective. I got the windowskin from someone else, and I feel bad I don't remember his name atm. No one should be allowed to make games that have been created, or use resources created by companies because that's a copyright infringement my friend. You want to sit on your little chair, and call me a thief, and how i just take stuff without asking, etc, etc, but I can bet my two big o' ball sacks that you never asked Square Enix permission to put a helmet on squall, locke, and cloud, and make them look like morons. I can also bet you never asked them to use their resources, but oh I'm the thief. I forgot you created final fantasy, my bad homie. Talking to people like yourself makes me sick for not doing my original games. Try making a game custom 100%, and than talk to me. I've tried it once, and I can tell you it's not easy when you're alone.
WCouillard

Close
12/20/2014 06:34 AM
You're confusing using rips with stealing handmade resources by others in the community. It's a common misconception used by resource thieves when they're trying to justify themselves to the people they're stealing from, when they get caught.

Not once did I ask you not to use any rips that were in our project. Like I said before in my post on FFD's gamepage regarding this issue, rips have always been the unwritten exception to the rule. The windowskins are NOT rips, I'll say it again. They are recreated to look like the originals, but you can compare them yourself and see the subtle differences. Now, I've already PROVEN that I made them, and you still want to pretend like that never happened and it's your right to use whatever the hell you want. I don't care if you took the windowskin yourself or got it from someone else who stole it, there's proof right here in this blog post that it's not your work.

Let's paint a picture for you. See your sprites of Cloud? I'm going to assume you made them at this point, even though you probably didn't. How would you like if someone just took those, used them in their game, and didn't bother to ask you or credit you for them? Would you say, "oh well" because it looks like a character that's copyrighted by Square Enix, or would you say, "this isn't right. I drew those myself." Think about that for a second. Millions of pieces of fan art from every medium are made every day. Do those artists not deserve the recognition and RESPECT from others in their community because they're creating art based on existing art? As far as I'm concerned, and many others, an 8x8 sprite is the same as a full canvas painting in this respect. They're someone else's work, no matter how big or small.

What you're suggesting is the same as you and I going to work in the same place, and you putting in 50 hours a week while I sit and watch TV in the break room, and at the end of the week, I GET YOUR PAYCHECK.

If it's not a rip, isn't free for public use (as stated in the terms of use) and you didn't make it, DON'T. USE. IT. WITHOUT. ASKING. It's very, very simple. Here's the kicker, too. Most people here are totally cool about this stuff when you go about it the correct way. Had you asked, I'm sure I would have said, "Sure." I even sent you my updated script, passed on a link to sound effects, and explained some script things for you. I also told one of your other team members to let me know id I can help. So obviously, this is not a situation where I'm overreacting. I even asked very nicely for you not to use resources that weren't supposed to be used, which was promptly ignored.

Argue and debate it all you want, but the rules here are pretty clear when it comes to stealing things from other people. So you have a simple choice: remove the things you stole, and don't display them here again without permission or credit, or continue to act hard and go make a page for your half-assed project somewhere else when this one gets deleted. I've already brought this to the attention of the admins here at RMN.

And just so we're clear, IN WRITING, NO, you don't have permission to use either mine or Paul's non-public resources.
JosephSeraph

Close
12/20/2014 04:38 PM
Bottom-line, I don't have your windowskin. But I will remove your scripts off my game. You can get off my gamepage now. I'm not here to debate with you.
WCouillard

Close
12/20/2014 04:55 PM
You're free to use any of my PUBLIC scripts. Anything else, hands off. I've said that over and over. The window skins are off limits and I've proven that YES, IT IS MINE. editing two of them together or getting it from another thief doesn't make it yours or anyone else's.

You're not being discriminated against. You're being a childish dick. Not stealing things from people's projects applies to everyone, not just you.

By refusing to acknowledge this, you're digging a deeper hole for yourself and just making it easier to get yourself banned. All you had to do was say "oops didn't know I couldn't use this, I'll change it" or ASK. That was too much for you, I guess.
jin69

Close
12/20/2014 09:18 PM
Wow, jin. That was quite a display, especially seeing as wcouillard has helped you in the past. We're a community here. Being a little more respectful towards other developers and the resources they've worked hard to create goes a long way.

Just saying "Sorry, I didn't know that windowskin was yours" would have gone a lot farther than the way you chose to respond. The "You can get off my gamepage now" attitude isn't cool, either.
Pages: first 123 next last