Last minute gift is exactly what it says on the tin, Unity's last minute (she had it ready just before Xmas) gift to the RMN community. It's a light cute tale about the antics of one forgetful young writer and her Christmas obsessed vampire flatmate. In set-up for some reason it almost reminds me of the Hollows series by Kim Harrison, the vicious but underlyingly honest and caring vampire, the talented but somewhat giddy protagonist. But I'm reading too much into this from the get go. Suffice to say this is a light romp in the Christmas spirit and Unity's way of giving people she will probably never meet a present, a true reflection of the season.

So our sweet but scatterbrained protagonist Lieve has been holed up in her room for the better part of December forcing her characters to endure the rocky road to true love in her latest romantic epic. 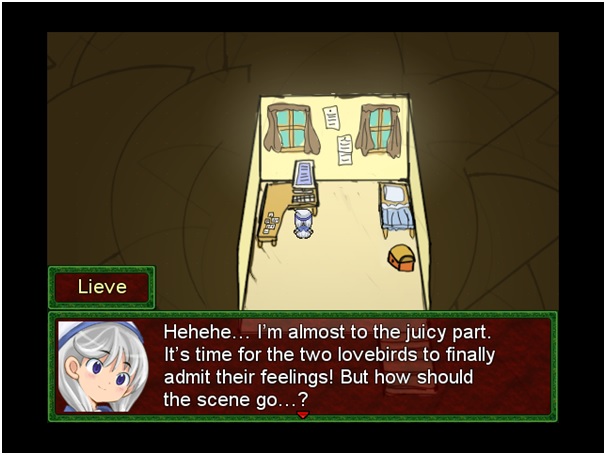 The story has reached its romantic climax when her room-mate, Mina, yes a vampire called Mina, takes the time to remind her that it is Christmas Eve and that she has been upstairs obsessing about her story for the better part of a month and Lieve realises with horror that she hasn't bought presents for anyone, and she has very little time left. Ever practical Mina suggests she gets out and goes shopping, she has an entire day to do it, but Lieve suitably horrified by the concept of facing the mad crowds on Christmas Eve, proposes to tackle the monster filled and horrific dungeon of the Krampulian Abyss in order to obtain the supposedly magical and wondrous gifts stored there. Personally I'd make the same choice; Christmas crowds are a beast of terrifying aspect, though Mina thinks she's a few cookies short of a hamper for doing it when she has no skill in combat at all. Lieve's solution, don't get into any, just dodge the monstrous hordes, snaffle the gifts and then with Mina's magical help get out of the abyss and back in time for carols and eggnog.

As far as wacky pea-brained schemes go, it's a good one, so with a cheery wave and a light step, to the abyss Lieve valiantly goes. 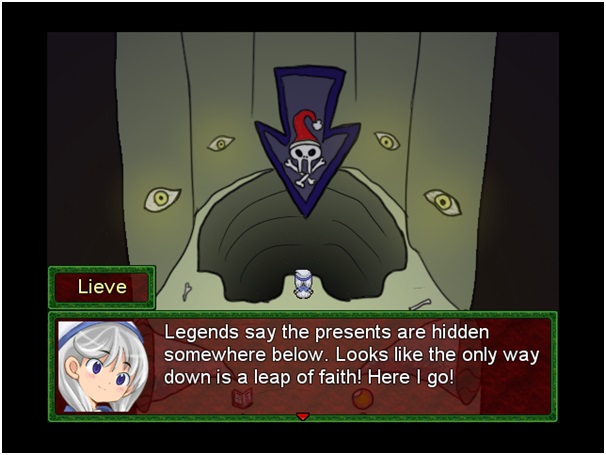 The place Santa goes to die.

The majority of game play is indeed a case of dodge the obstacles, be they exploding slimes, candy-cane stripe spike traps, one track spiders or restricted imps. The puzzles ramp up the further into the dungeon you go, adding complexity to each level. The first being simply a case of dash and avoid and then it becomes a case of getting your timing right as the number of obstacles and the complexity of the levels increases. At no time however did it feel like it wasn't fun, at times challenging but still very much fun.

This is most definitely aided by the custom graphics and map design which whilst presenting a trial never felt like it was actively working against you, the soundtrack of classical music and Christmas carols, both straight up and adulterated really adding to the immersion. Don't get me wrong it's not all tinsel and Christmas lights, in fact there is no tinsel and Christmas lights at all, this is the Stygian Krampulian Abyss after all, one supposes the abode of Krampus himself though you never see him, the giver of coal and depending on your folklore source, eater of naughty children, and really who could be naughtier than someone who ignored their friends and left the gift collecting until the very last minute. 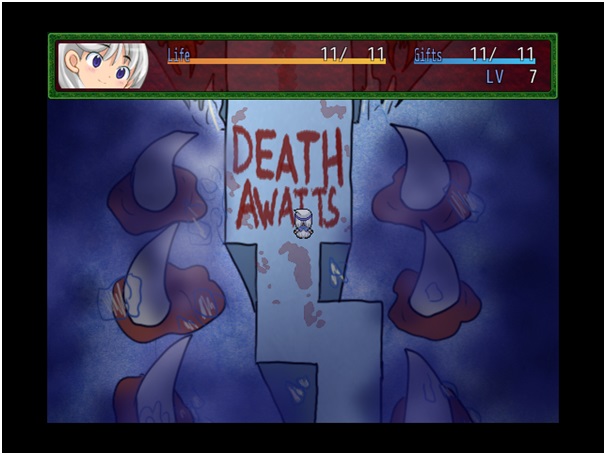 Nice interior decorator you've got there.

You start the game with 5 hit points, running into traps or monsters removes some of them, finding glowing stars, reminiscent of Christmas ornaments will grow your levels and add a HP per level increase. There are also healing items, egg-nogs for limited healing and a life chalice for a full heal though they aren't very plentiful. In addition certain save points can also fully heal you. It's a good idea to remember where they are, because sometime you they will be the only thing that keeps you going. Running into some of the monsters will make them disappear, which makes traversing that section of the puzzle easier but it's a juggling act between getting where you need to go and being alive to get there. Though just a note if you leave the level the exploded monsters will spawn again so try to get everything done you need to with a single run through in each monster infested level. Unity has aided in that endeavour in that most of the branching rooms with multiple exits are free of monsters so you can return to them to ensure you have traversed the entire convoluted abyss in your search.

Along the way you find various separate treasure rooms containing the presents, your entire reason for being in this dungeon. Usually there is also a save and teleport included to prevent you from having to risk running a dungeon gauntlet more than once. Quite a few of the presents have a link back either obviously or subtly to certain aspects of the RMN community, and if one commenter on the game page is to be believed, one of them links back to me. If so, I'm not so secretly chuffed. Though this has to be my favourite homage. 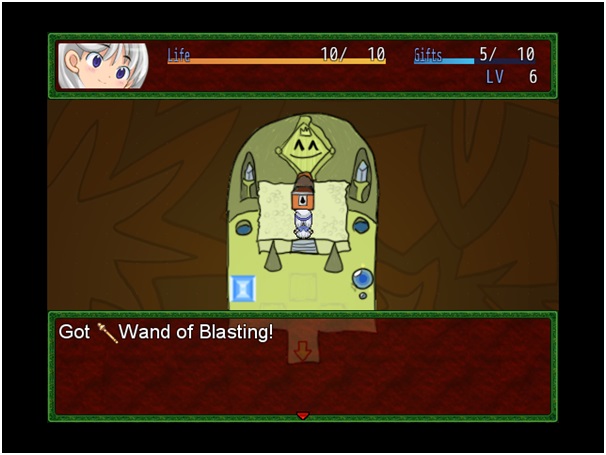 I actually want one of these for Christmas... Ba-da-boom

Lieve has set herself the goal of 10 presents as that will fill the stockings of all her friends and get her out of trouble, but there are a total of 15 that can be collected if you are the completionist type. I am, but I've never demurred on that fact, so of course I went searching for all 15.

The very end of the game is a sweet message from Unity herself to her players and to RMN, and it left a big smile on my face when I had finished. I think you'd have to be a Scrooge of the highest order if it doesn't do the same for you. There's no place for humbugs here.

..and I am so looking forward to the continued adventures of Lieve and Kim, acolyte of the Rat Goddess...

I'm not familiar with Hollows, but after a quick wikipedia search it already looks interesting! But you were absolutely correct in that the name of the dungeon, the Krampulian Abyss, is an homage to the Stygian Abyss XD

The Hollows has its moments and I think the series has one more book until it's done so it's not a bad time to read it.
Pages: 1