It’s A Secret To Everybody

Sometimes a title just sucks you in, and this is what happened to me with Tobi My Secret Cow. The current download is just a glimpse into what the project could have been. I spent about 25 minutes on it, and in that time I got some of the setup for the story and gameplay, but not much payoff. There’s no much to this one, but hey, I was pretty entertained trying to see where it would go.

You play as Tobi, who may or may not be a cow, (it’s a secret) as he wakes up in a mysterious cave. After fighting some slimes he’s knocked out and wakes up in demon jail, for demons, where he is imprisoned for being a demon. Naturally he manages to escape, and from there you eventually meet Anya, who is part of an organization that Toby is trying to join. The two are on some sort of mission, but whatever it is will also remain a secret. 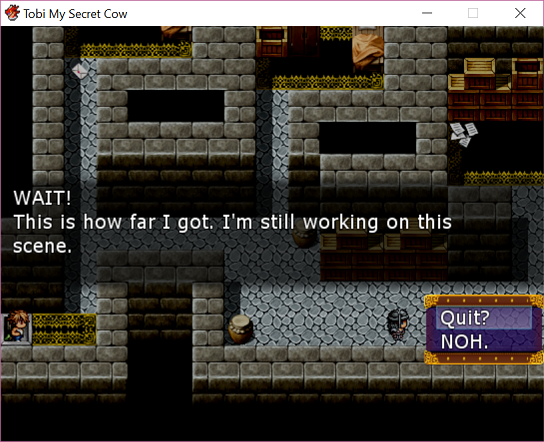 The demo is very up front about where it ends. 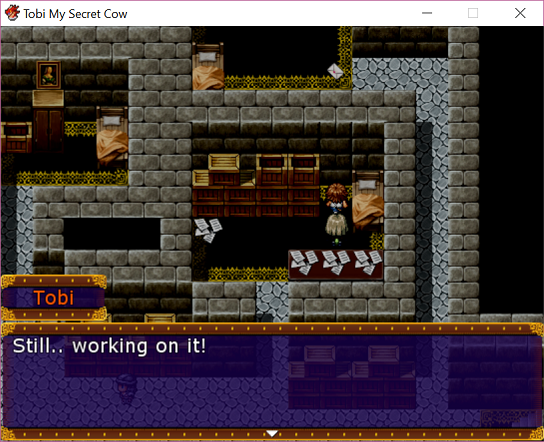 
The style seems to be that particular mish-mash of ideas that many first or experimental RPG Maker projects have, and I don’t mean this as an insult. In this case I thought the zany shenanigans were pretty amusing -- not everything has to be groundbreaking -- and it was nice seeing the custom portraits. The actual gameplay is mostly battles with some rats, and there’s not much to the bit of the combat system I saw. 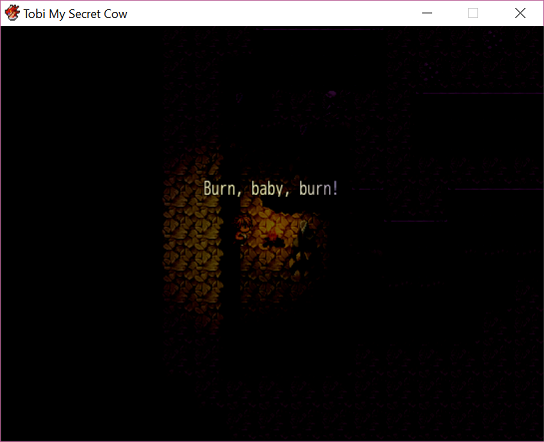 
Like the fate of many experimental projects, it seems unlikely to be finished. If you try it out, make of it what you will! If you’re curious based on the title, I say go for it. It’s short and you might have some trouble with Tobi’s HP against the rats, but you get a potion once you’ve cleared the first part of the dungeon. That was about the only trouble I had. On the off chance this does see an update, I’d check it out.

The cow’s secret will haunt me.