Made for one of the onehour contest that RMN occasionally used to run though IRC on a Friday or Saturday night kicking off at midnight and ending at 1am, these games were never made to be anything more than a bit of fun and an exercise to see what could be made to fit the theme in such a short time. In relation to this game, I have no idea what the theme was as the IRC dialogue is long since gone, but I could probably guess time loop or inexplicable crime solving or perhaps even my beach has no sand. That of course is working on the assumption that the game actually hit the theme, given the restricted timeline and the general feeling of doing this just for the giggles there is a fairly high chance the theme being ignored entirely.

Actually after I'd finished the game I found there was a helpfully titled text file called references which listed the following; Hero works at a quarry, Wacky alien friend, Name is Fred (but not Flintstone). I have no idea if they were the possible themes, but our hero's name was Fred, no surname provided, and he does indeed work in a quarry. Though whether they were just features that the developer wanted to include and therefore did, or the actually theme wishlist I will have to leave to the imagination (or one of the participants letting me know). 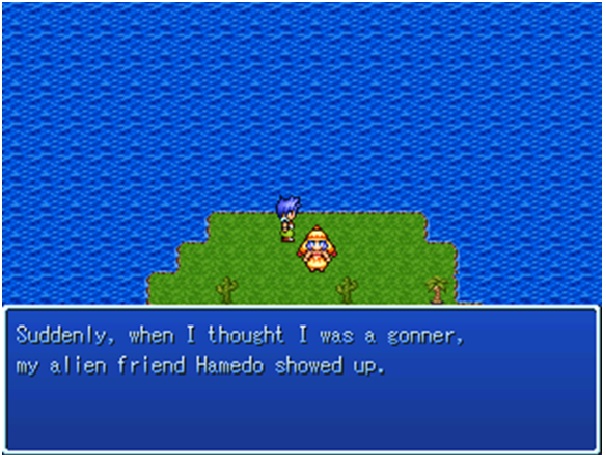 As expected this unnamed game doesn't last very long and uses the default everything for the engine but it still manages to provide an entertaining experience. The game in a nutshell proceeds as follows. Fred after getting off from his day at work at the quarry gets a call on his crime phone, yes he's got one of those, I have no idea if he also has a grocery phone and a booty call phone as the game is too short to go into those parts of his life, but he's got a crime phone. It seems that there have been some high level burglary, so our sturdy quarry worker-cum-vigilante heads off to teach a few thugs a lesson, unfortunately for him after managing to track down the brigands his boat blows up.

Luckily for our now shipwrecked hero, he's got an ace up his sleeve; Hamedo his alien friend who turns up just when he thought all hope was lost and drafts him in to testing out her latest experiment in time travel. Of course from that point the outcome is assured, a loop back to the beginning and rinse and repeat ad infinitum.

Basically that's the sum total of the game, it lasts less than 2 minutes from open to first repeat, and doesn't involve a great deal of player interaction other than directing Fred either on land or sea, no battles, no character development, but then it was made in an hour so you really don't expect anything more than that and could easily have got less. Getting out of the game requires you to crash out and whilst that not my favourite tactic by any means in this particular instance it fits with the storyline since the only way to get out of a recursive time loop is to crash. Just ask the Doctor.