The Making of a Pantheon

Hey guys, it's me, bob_esc again. We've just wrapped up our first round of internal playtesting, gotten together some testers, and started up more balance testing. I'm going to be WILDLY OPTIMISTIC and say we'll be done by March. But this blog isn't about that. This blog is about Monsters!

I originally had a bit in here about the monsters in the original SaGa games, but since I didn't do any research got some of my facts mixed up, it wasn't great. There was this whole thing about Black Pudding and bug-typed Pokemon. Now, though, you get the pure, unadulterated good stuff about...

Masters of the Demon World Monsters

To end of making a game that felt like SaGa, we needed a menagerie of monsters that fit the same criteria as those in the SaGa games did: groups of related monsters ranging from the more mundane to the more fantastic from a variety of different pantheons and mythologies from around the world. Well. The actual method of monsters generation from FFL1 ranged from "steal the D&D Monster Manual" to "Steal everything not nailed down." Our process here was fairly straightforward and a little more dignified.

Step 1: Spitball
Probably my favorite part of the whole process. We put our heads together and came up with general monster families. Some of these we ripped directly from SaGa. In our defense, these were the fantasy staples like Skeletons and Zombies and Goblins. The next stop was probably my favorite Wikipedia article: List of Legendary Beasts. Of course, this used to be laid out waaaay more chaotically and it was just a bunch of monster names stuck together, but then when you look at the List of Legendary Creatures by Type, you get a much better sense of how much is out there about related types of monsters. Perfect! This is how we found some of our more fun monster classes like the Goat class or the Weasel class. Most of our classes started life by spotting something fun and rolling with it: 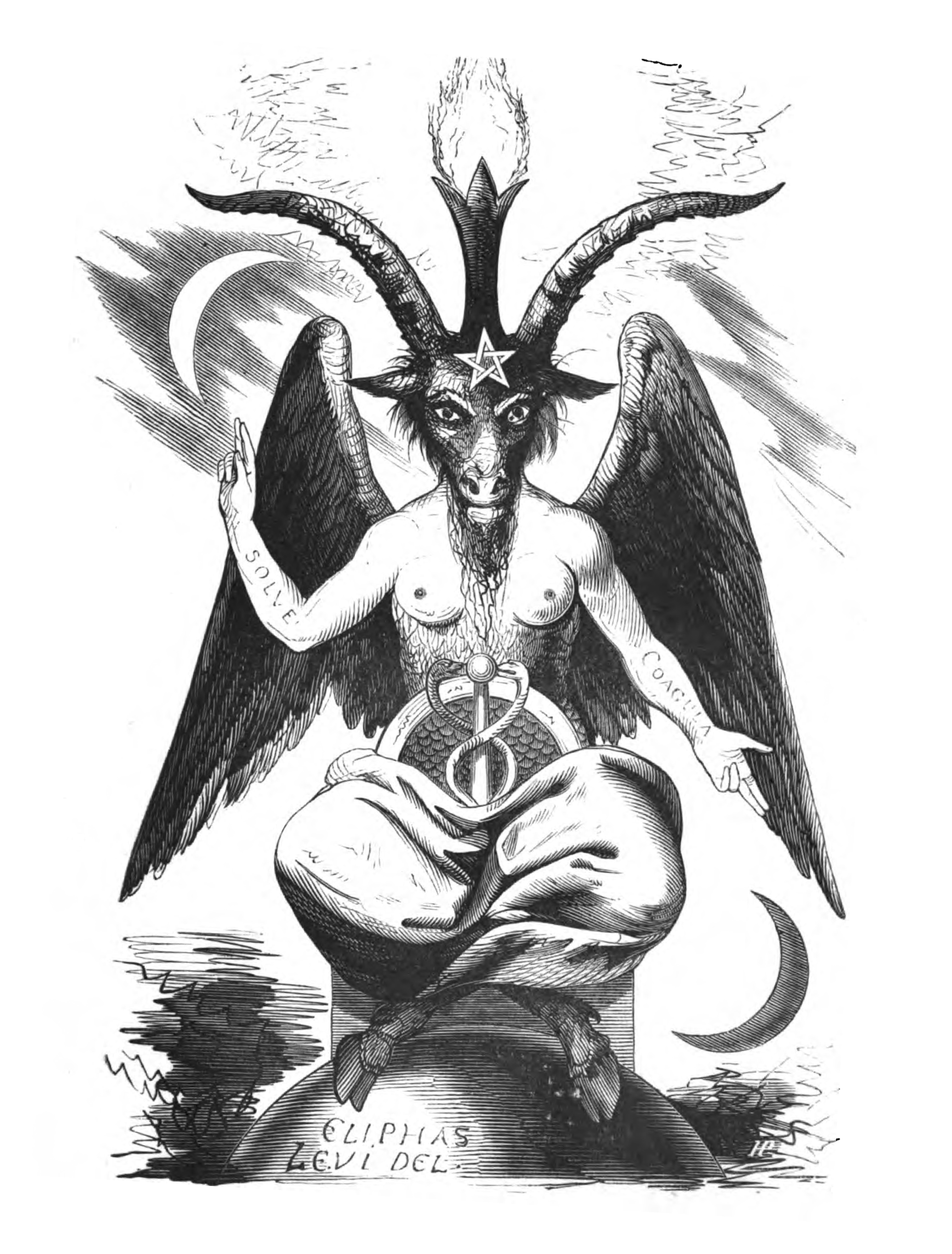 The classic image of a Baphomet created by Eliphas Levi


When trolling around on teh interwebs, we came across the Baphomet. Thanks to the Church of Satan, what we traditionally see as a Baphomet is basically the devil. I think those guys are still trying to get a statue put up in Oklahoma? Whatever. But the Baphomet originally was what the Knights Templar were accused of worshiping. Poor bastards got burned at the steak because the King of France didn’t feel like paying his bills. They were rounded up on Friday the 13th in October, 1307. So, the made-up idol responsible for a huuuge Western superstition? Yes please. We had to have it.

Step 2: Populating and Organizing Groups
This part was a little harder. With the Baphomet, the problem became "What goes in a group with it?" We toyed around with having it included with a Royal Demon family we were considering, but that didn't pan out. But then I said, "Well there's a rich tradition of goat men running around and making love to nymphs in Greek mythology...." Viola! The Goat group was born. Look out for Satyrs. They will sing your ass to death.

In some of the other scenarios we were looking to fill up groups we rather enjoyed like the Jellyfish group and the Weasel group. In the case of both, we had a few monster types we liked, like the Moon Jelly and the Ratatoskr respectively. 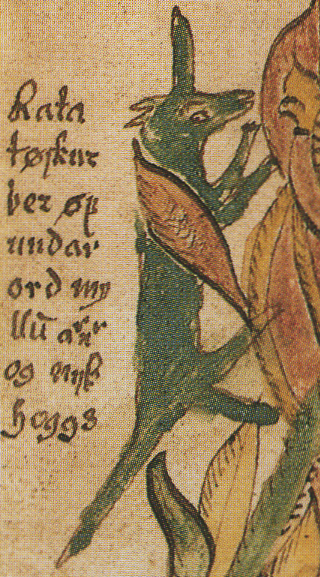 The majestic Ratatoskr: Squirrel messenger of the Norse gods


So how do you fill these? Well, the answer is fudge. The Ratatoskr actually got moved out of the Weasel group and placed in the Rat group, while things like the Hinotama and Medusa (I'll explain, promise) ended up in the Jellyfish group to fill it up. By "fill it up," I mean that the way our monster transformations work, you need the same number of monsters in each group. While not, strictly speaking, a jellyfish, the Hinotama felt good as a jellyfish. It floats around, it’s pretty fantastical, and it could probably mess you up if you bumped into it in an alleyway. 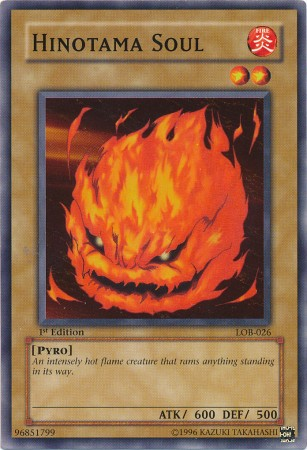 
Well, uhh, that still makes my point: it’s dangerous-looking, and it has a very SaGa kind of feel in that it is some slightly obscure Japanese legend. Perfect! At the same time, a Ratatoskr might be a squirrel, it still fit in with the rodent-themed Rat class enough to shove him over there.

Oh, and I promised to explain why Medusa is a jellyfish. We liked the idea of having Medusa somewhere in our game, because you can't really play thought the first Final Fantasy Legend without someone in your party getting turned to stone by one, but it always felt odd to run into groups of 5 Medusas, when there was clearly only ever one. Gorgons? Sure. Medusas? Nah. So what else has lots of little squiggly things coming off it? Where does Medusa fall taxonomically? Jellyfish! Done, and done. Makes perfect sense.

Step 3: Making the Cut
This part of the process was difficult as well. We had a full list of some 52 different monster types but only room for 27. So we had to make some choices. Do we really need a Demon group AND a Demon Royalty group? Not really. Can we really justify some of the choices we made to fill up an enture group of Illusion enemies? Not really. Furthermore, do we really need Ghosts, Wisps, Burning Demons, Illusions, and Disembodied Eyes? That's a lot of stuff floating around, so Eyeballs and Illusions got axed. Sadly, some stuff we really liked had to go at this stage: 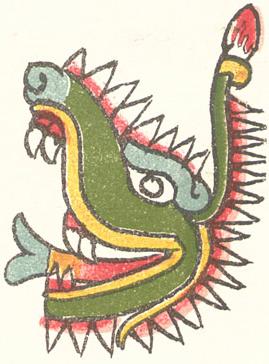 The Cipactli: Where the vowels don't matter and the pronunciation is made up


We had a whole host of fun Aztec creatures! South America has a rich and storied history of human sacrifice in the name of peyote-inspired gods. SaGa, the original, didn't pay much mind to South America. That said, there is exactly zero chance you knew what a Cipactli is. And actually, WE don't actually know much about them. I mean, I read the Wikipedia article. Still. Since absolutely no one knows anything about it, you'd have to google it, and that's no fun. If you have to google one or two things that's OK. But we didn't want to just confuse the shit out of everyone by making a whole group of incomprehensible monsters that you can't even pronounce.

So, sadly, we axed the Aztec Chimera group.

Step 4: Technical Stuff
Now for the good part! When I asked psy_wombats about how we went about this from a technical standpoint, he said...

author=psy_wombats
A quick word on how monster transformations work: In the original games, monster transformations are all handled slightly differently. In my opinion the best-balanced version was the original, where monsters had families and groups. Monsters of the same family would be like goblins, onis, and giants all having the same battle portrait, while the greater group would include rats and wolves, which share the same walking sprite. Internally, there's a huge table of what happens when monster of family X eats meat of group Y and rules for the level of the resulting monster based on the levels of the eater (and also the dead monster victim).

So the key balance element around monster transformations comes down to that monster X + monster Y table. How was the original one constructed for FFL1? No idea. Probably by hand. Either way, there are some strange balance things going on with that table and it's possible to end up accidentally eating something smelly in the World of the Sky and end up with a 20 HP CLIPPER, no warning. We've given players the favor of telling them what they'll transform into first, but we've also constructed the table a little more intelligently. I actually spent a week on a monster table construction program that uses iterative, genetic algorithms to construct an "optimal" table that matched our criteria: can't gain monster levels too quickly, can't suddenly lose power, some families are intrinsically rarer than others. Hopefully it did its job, and monsters should be rewarding to play and grow in SaGa4.

Well said, buddy. That "optimal table" he's referencing is this one right here:

How do you come up with a matrix like that for 27 different monster groups with 6 different monsters in each with 13 levels of monsters such that you minimize the number of individual monsters--that is, 1 in 162--that you can't transform into while simultaneously figuring out ~12 different groupings of families that actually make sense, and all the while minimizing the number of "non-incestuous" meat consumption that lead to no transformations.

TL;DR, its haaard. We used that genetic algorithm stuff psy metioned up above. I think we ran those algorithms upwards of 5000 times, and we finally ended up with this breakdown of groups such that the only monster you can't transform into is an Annis (level two Hag, of the HAG group). There are about 10 monsters on 13 levels. PERFECT!

After that was squared away, the only thing left was to group monsters together into sensible families. Those families basically mean that if you are a member of that family--say, a Ooze of the Slime group, abbreviated GOO--and you eat meat from another member of that family--say, a T-Cell of the Disease group, abbreviated DIS--you don't get anywhere.

So, which families make sense? Elephant (EPH) and Magic Bird (PNX) don't make sense. However, Bird (BRD) and Magic Bird DO make sense, and I guess Elephant makes sense to go with Goat (GOT) and Horse (HRS) because they have hooves (more or less). Frankly, that's my least favorite grouping, but everything else is juuust fine. Snake (SNK) and Jellyfish (JLY) is questionable, but I've decided everything else is fine.
Just.
Fine.

Thanks for reading! Leave me some comments if you've got questions.

BTW, Cipactli it's pretty much the aztec deity form of a crocodile. It is the terror at the water, and the one that ripped Tezcatlipoca's arm if I'm not mistaken. I actually don't remember. It represents something like death and nature.

And that creature list is one of my faves too. <3
Pages: 1